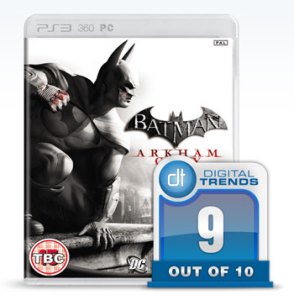 I’m going to make this really, really easy for you: If you like video games with solid action and vividly detailed 3D worlds, you’re going to be buying Batman: Arkham City. Bear in mind, that’s not a recommendation. You know about the game already. You know its 2009 predecessor Batman: Arkham Asylum was stellar, and that this sequel’s more open world and diverse array of characters is a step forward. You were sold on the game long before you clicked into this review.

I’m basically here to confirm what you already knew: Arkham City, for any of its minor warts or shortfalls, is easily a Game of the Year contender.

The new game’s story finds Gotham’s Dark Knight exploring the confines of Arkham City, an open-air prison built into a walled-off, crumbling section of the city. The worst of the worst criminals can be found here, which amount to roughly everyone in the Batman rogue’s gallery. The Joker is of course a returning villain and the Riddler is up to his old tricks — albeit in a much more expanded role — but most of the ugly mugs you’ll be beating into submission as the story unfolds weren’t seen in the first game.

Things aren’t going well in Arkham City, and when Two-Face captures, then plans to publicly execute Catwoman. Meanwhile Batman has his own problems when his civie identity of Bruce Wayne is targeted by an old enemy. All roads lead to Arkham City, and once inside Batman must save Catwoman, as well as uncover what his enemies are planning before the cryptic “Protocol 10” is enacted.

The basic gameplay is largely unchanged at the most fundamental level, which makes sense given how effective the first game was at letting players feel like they can be Batman. You start with almost all of the gadgets that were obtained by the end of Asylum. Some are missing, waiting to be obtained as the story progresses, and some are simply new. Overall however, there are very few surprises on the utility belt side of things.

If there’s any surprise, it’s the sequel’s dramatically enlarged scope. Unlike Asylum‘s relatively small outdoor areas separating the different mission spaces, Arkham City delivers a proper open world. The only load screens you’ll see come up when you transition between indoor and outdoor spaces. To the game’s credit, those load times tend to be pretty minimal, as are the ones you face when reloading a checkpoint.

The city is filled with all manner of activities to keep Bats busy. In addition to the central story, there are a dozen or so villain-specific side missions that unfold in multiple stages and put Batman’s various abilities to the test. Even when the action calms down and the World’s Greatest Detective does his thing, the challenges you’re faced with are much more elaborate than following a trail of glowing breadcrumbs (though you’ll do some of that as well).

…Catwoman. Those who buy Arkham City new get to punch in a redemption code that adds a four-chapter Catwoman-centric story into the game. She becomes a playable character during certain sections of the story, and you’ll be able to swap between her and Batman in specific locations once the main plot has been completed.

The Cat and the Bat

The controls are fundamentally the same between the two characters, but Catwoman is much more agile than the Dark Knight. Instead of a grappling hook, she’s equipped with a whip that can be used to quickly and easily traverse the empty spans between buildings. She can also crawl on the ceilings in certain areas, and she’s got a unique, more combat-oriented set of tools to draw from. There’s value in exploring the city in Selina Kyle’s shoes, since there are red Riddler trophies that are specific to her and her abilities.

Finishing the game once unlocks a New Game Plus mode, which carries over all of your gadgets and Riddler challenge data into a new, separate save. Enemies are tougher and random encounters feature a wider range of weapons and enemy types. In addition, the counter indicator no longer pops up, meaning you’ll have to rely on other visual cues in order to successfully redirect an incoming attack.

For all of Arkham City‘s resounding successes, there are a few stumbles. The main story, is a mess in some fundamental ways. Certain points aren’t clearly explained or just go unresolved. There’s also a been-there-done-that feeling to some of the broader overarching story strokes. The endgame takes a bit of a risky gamble that ultimately pays off, but the impact will be cheapened for those who aren’t able to form a connection with the larger story.

Fortunately, the side missions fare considerably better. Interestingly, the wide range of missions and unconnected storylines in Arkham City serve to enhance the game’s connection with its comic book roots. Each of the villain-centric side missions and even the main story all feel like individual arcs pulled straight from the comics. Some are better than others, but the sheer variety at play in this game’s various stories prevents any weak links in the chain — even the main narrative’s weak link — from ruining everything.

I also didn’t particularly care for the way upgrades are rationed out as you play. The RPG-lite experience system works for this game, but the assortment of unlockable abilities that Batman has access to is underwhelming. You’re very much being ushered along a largely linear path; while there are some choices to be made, none of the level-based unlocks feel particularly impactful or game-changing.

The question every reviewer faces with Arkham City is whether we should reward iteration over innovation. Asylum was practically perfect as video games go, offering up a compelling experience that was well-executed, fun to play and true to its source. Is it fair to come down on Arkham City in any way for not evolving the 2009 experience more than it does?

I say no. There’s still room for improvement in a few spots, but overall Arkham City recaptures the magic of Rocksteady Studios’ first Batman effort. This is an exceptional game and, for any warts you can find, it has more than earned its place as one of the 2011 frontrunners for Game of the Year honors.

Topics
The best PS4 games for 2023
The best upcoming Nintendo Switch games: 2023 and beyond
Shoulders of Giants brings mascot-era nostalgia to the roguelite genre
Xbox and Bethesda’s Developer_Direct: how to watch and what to expect
How to fast travel in Forspoken
Star Wars Jedi: Survivor will now release in April following delay
How to get the Silver Card in Fire Emblem Engage
One Piece Odyssey’s great ending would have made for a perfect anime arc
Don’t need the Xbox Series X? The Xbox Series S is $50 off today
Tomb Raider returns as a mobile roguelike via Netflix
Samsung’s 49-inch Odyssey G9 gaming monitor is $600 off today
Rode’s NTH-100M headphones are built for gamers
The best upcoming Xbox Series X games: 2023 and beyond