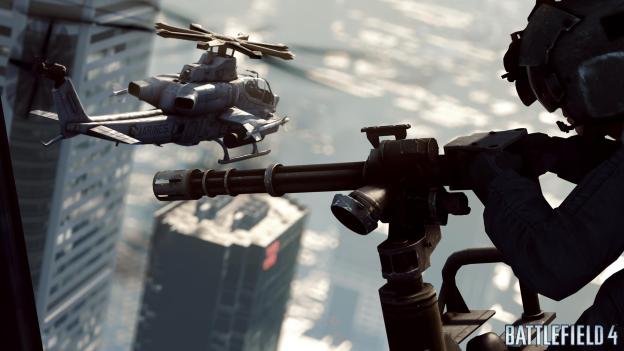 Electronic Arts really, really wants to position the Battlefield franchise as a rival to Call of Duty. The publisher continues to put it (and its kissing cousin, the Medal of Honor series) out at the same time every year in direct competition to Call of Duty. The gaming community occasionally takes the bait, but for the most part, they know that these two franchises are very different, and continue to head in opposite directions.

Battlefield 4 is the next step in the distancing of the two first-person shooters. Where Call of Duty is a faster, more intimate game with smaller maps, Battlefield 4 is huge and epic in scale. Maps aren’t just small arenas, they are cities, entire microcosms that you can interact with in multiple ways. The next-gen versions are especially significant this time around for the franchise, as they will finally allow the console users to experience the same 64 player cap PC gamers have enjoyed for years. Beyond that, it is just an evolution of the series, and one that should impress fans.

Your Mission: Kill the baddies. The story of the campaign was hinted at a while back, but the focus at E3 was on the playable multiplayer mode, specifically the map “Siege of Shanghai.” As the title suggests, the map takes place in Shanghai, but one that is under attack.

Global Conflict. The game was billed as Chinese versus American forces. That may have a direct correlation to the campaign, or it may have been just a convenient split of arbitrary team names based on geography. Regardless, the city was the star. It was huge, and it promoted some incredible gameplay.

Shoot, Jump, Stab. In terms of pure gameplay, not much has changed at the core level. The controls are still the same; vehicles, from tanks to helicopters (and boats, jet skis, troop carriers, etc ), are available; and the game mode offered was the standard “Conquest” mode. There were some major differences though.

The Conquest mode had one capture point that was on the top floor of a skyscraper. This gave attacking teams a few options. You could listen to the muzak in the elevator and calmly wait for the doors to open, almost certainly to be followed by enemies happy to murder you. You could take a helicopter and jump out, attacking from above. If you are good enough with the flight controls, you could stay in the helicopter and offer air support, mowing down people that don’t know about this cool tactic called “running for your life.” But there is another option, and it is by far the coolest.

Bringing Down the House. If you and your team can’t reach the top, or maybe you are just feeling a bit prickish, you can salt the Earth, so to speak. Just take a few tanks into the base of the building, and go to town on the support structures. A few well-placed shots, and the next thing you know, the entire building will collapse. Seriously, the entire skyscraper will fall. Has there ever been anything quite like that before?

There is also a companion app for tablets that you can use to call in things like air support. We’ll have to wait to see how useful it actually is.

Pretty. It wouldn’t be a Battlefield game if it wasn’t stunning to look at. From the character animations to the debris to the physics at work, things look incredible. Battlefield 4 is easily one of the best looking games around, although the gap is much less noticeable between it and other games compared to what it used to be. There a lot of pretty games coming for the next-gen.

There are a few texture issues in the game, but these are most likely things that will be smoothed out in the final release. While it is spectacular to watch a building fall, the actual animation is a bit clunky. That may be fixed prior to release, but even if it isn’t, complaining about the graphics after you just destroyed a random building on the fly, simply because you can, seems a bit petty.

Battlefield 4 is not a competitor to Call of Duty, and it never really has been. The two franchises offer different experiences that only overlap a bit. With the newest entry in the series, that gap widens. From a technical standpoint, the game is incredible. It needs to polish a few rough edges, but if the rest of the multiplayer can shine like the one playable map at E3, Battlefield 4 is going to be an impressive title, regardless of the competition.

Monster Hunter Rise is coming to PlayStation and Xbox, minus cross-platform saves
The best Intel processors for 2022
All cross-platform games (PS5, Xbox Series X, PS4, Xbox One, Switch, PC)
Amnesia: The Bunker takes survival horror into a ‘semi-open-world’ sandbox
Blaseball makes its absurd return in January with a dedicated mobile app
Pokémon Scarlet and Violet Titans guide: locations, weaknesses, and more
The best weapons in Modern Warfare 2: every gun ranked
Pokémon Scarlet and Violet: How to beat the Elite Four
Call of Duty: Warzone Mobile: release date and preregistration details
Best gaming laptop deals: Save on Alienware, Razer and more
‘Wordle’ today, December 2: Answer, hints, and help for word of the day (#531)
Elden Ring for PS5 is $15 off with delivery in time for the holidays
The best iPhone games to play in December 2022: Marvel Snap and more