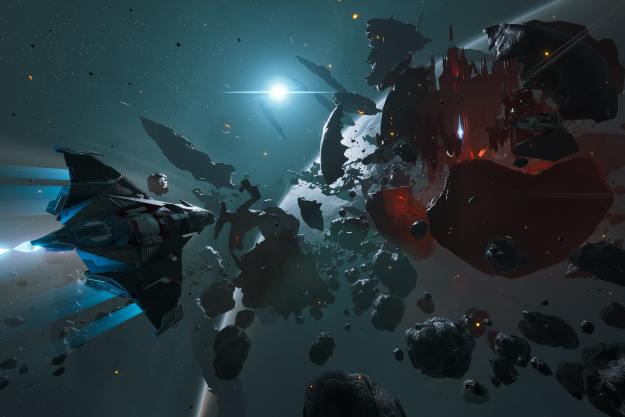 “Chorus' stellar space combat is brought down by a myriad of design choices that range from frustrating to outright annoying.”

When I previewed Chorus, I praised the game for its high-intensity space dogfights. Aerial combat is fun enough, but when you move it into space and give a player’s ship superpowers, combat gets pushed to a whole new level. You can teleport behind your enemies and gun them down, or actually drift in space. Let me repeat that last part; you can drift in space, like, as if you were in a Fast and Furious movie.

But space combat and the killer magic powers that your ship has are the beginning and end of Chorus‘ strengths. The game (one that’s clearly had a ton of time and money put into it based on its visuals and wonderful sound design) is a pain to trudge through when you’re not shooting at something. Even then, there are plenty of reasons to be annoyed with it.

Chorus brings great space combat to the table, but that’s not what defines it. Instead, it’s the game’s myriad of issues, all of which were present on my screen more than enemy ships ever were. Horrendous UI, bloated design, an uninteresting story, and a completely irredeemable main character all drain the fuel out of Chorus‘ tank.

Chorus puts players in the shoes of Nara, who, by the time you actually start controlling her, is a pirate hunter for a group called the Envoy. She’s incredibly talented, well-liked, and leads the group as it fends off a fascistic space cult called The Circle that’s slowly expanding across the star system.

However, when she’s first introduced, Nara isn’t with the Envoy: she’s a warrior for The Circle. Not just a warrior either, she’s one of their best warriors, someone who is so trusted by the group’s leaders that she’s tasked with destroying an entire planet that refuses to enter the cult’s fold. She does so, killing billions by her own estimation. After committing intergalactic genocide, Nara has her “are we the baddies?” moment and leaves The Circle, abandoning her identity and joining the Enclave, where she isn’t known, to try and move on with her life.

The bulk of Chorus has players fighting against the cult as Nara, slowly pushing it back as she destroys its outposts and ships, all the while helping the resistance movement that’s grown against it. It’s her way of atoning, and the game often asks players to sympathize with Nara, showing her in vulnerable moments when she’s confronted by her own memories. That’s an ask that I simply couldn’t respect. That Nara, who only realized the cult she was part of (which subjugates groups of people into submission with psychic totems) was bad after blowing up a planet, is irredeemable.

It’s entirely possible that I’m simply too harsh, too jaded, or too uncaring, but I couldn’t find a single way that Nara atones for her actions outside of fighting The Circle. In fact, her taking an active part in the resistance was a reluctant decision. She didn’t want to go back to the fighting and violence that she knew. If Nara could have had her way, she would never have to confront her past, never have to make up for what she’s done. She’s a selfish, immature character, one who was written into one of the most forgiveness-demanding villain-to-hero stories I’ve ever seen.

She’s a selfish, immature character, one who was written into one of the most forgiveness-demanding villain-to-hero stories I’ve ever seen.

But in the context of Chorus‘ entire story, Nara is just one part of the issue (albeit a very large one). The game introduces new characters frequently, keeping a small number who reappear to progress the plot. But it’s nearly impossible to actually develop any connections with these minor characters. In Chorus, characters hardly ever get out of their ships, so all the NPCs you encounter are really just voices in ships, displayed through a small picture on the right side of the screen.

Without seeing their faces in motion, these characters aren’t much more than disembodied voices. When one of them died in a battle, it simply didn’t hit me. It was just another ship blowing up. It doesn’t help that none of the game’s other characters are very compelling either — the way they’re presented totally removed them from me.

In all fairness, that tracks with Chorus. As I moved through the game’s story, I didn’t feel connected to it. There weren’t any instances where I rushed to my next story mission in the game’s open world because there was a sense of urgency. Everything happens slowly, and very rarely do the stakes feel as high as they’re made out to be.

My time spent slogging through Chorus‘ cutscenes and dialogue was made somewhat worth it whenever I got the chance to actually shoot at some other ships. The game’s take on space combat is excellent and left me feeling like an unstoppable force in any battle. While engagements with smaller ships are the most common players will run into, the fights with larger vessels are where the game really picks up.

These fights are as cinematic as they are thrilling, and put every weapon players have to the task.

During these fights, which I liken to the Rebels flying across the Death Star in Star Wars, players weave through laser beam fire, systematically destroying turrets and thrusters. These fights culminate with battles inside a ship, where players eventually blast its core to smithereens and escape before the entire vessel blows up. These fights are as cinematic as they are thrilling, and put every weapon players have to the task.

Combat in Chorus is a high-stakes game of rock-paper-scissors, except they’re swapped out for chainguns, lasers, and missiles. Each damages a certain kind of defense proficiently, with guns tearing through a ship’s hull easily, lasers quickly taking down shields, and missiles being able to blast away the armor built onto spaceships. Switching between the three. as well as Rites, magic abilities that let Nara teleport behind enemies or scan the area, left me making different inputs on my controller each second.

But combat, and Chorus‘ gameplay at large, are hurt by some questionable decisions that don’t just make the game annoying but ruin its accessibility. Most obvious are the game’s HUD and UI, both of which were seemingly made for ants. Enemies in dogfights are represented by small circles that appear on the screen’s peripherals if they’re not in front of players. Any other objects or objectives you ping using a scan show up the same way, albeit as triangles.

As a result, Chorus can sometimes be completely unintelligible. Some of the game’s missions task players with finding objects in large 3D spaces, which requires using the ship’s ping. But it doesn’t differentiate between objects that are part of a mission and other objects out there in space. They’re all marked with the same small symbol, something that led to so much confusion for me that I thought the game simply hadn’t spawned in what I was looking for. My eyesight is 20/20, so I can’t imagine the experience anyone who has any kind of vision impairment may have with Chorus.

Chorus can sometimes be completely unintelligible.

Similarly, Chorus makes subtitles a necessity rather than an option, regardless of whether or not you’re wearing headphones. While flying through space — which is almost always a music-free experience for whatever reason — Nara sometimes talks to herself. But whenever she has an internal monologue, she yell-whispers, making almost every word an incomprehensible hiss. Thankfully the size of Chorus‘ subtitles can be adjusted in its scant accessibility menu, but the remainder of the game’s text can’t be changed from its difficult-to-read size.

Chorus is a frustrating game, not because it’s janky or bug-ridden, but because it could be so much better. A litany of truly bizarre design choices, like eye-straining UI and incomprehensible dialogue, ruined the experience for me. If this game was designed with more accessibility in mind, it wouldn’t feel as infuriating. I would be able to look past Nara, who is without a doubt one of the worst main characters I’ve seen in a game in a good long while. I would be able to praise its combat, which feels absolutely fantastic. But nothing in Chorus outshines its flaws, which work their way into every redeemable moment the game has.

If you’re looking for something that scratches the same ship-based combat itch, Ace Combat 7: Skies Unknown is a fantastic way to jump into the pilot’s seat.

How long does it last?

Chorus takes about 10 to 12 hours to beat, though playing through all of the game’s side content could easily tack an extra five hours on top of that,.

No. Chorus is a prime example of how great gameplay can be torn down with obnoxious design choices.