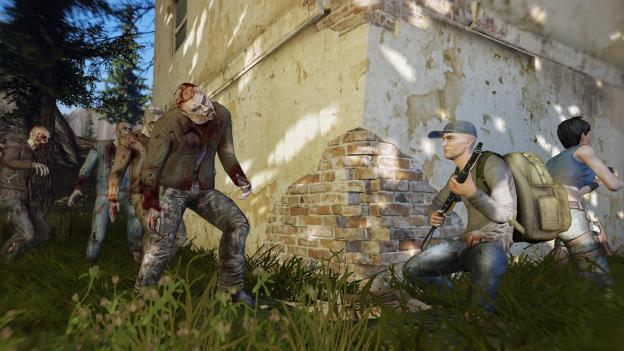 In a sea of shambling, mindless, brain-hungry zombie video games, DayZ was a shining beacon of originality in 2012. The little mod that could managed to make the game it’s based on, Bohemia Interactive’s military simulation ArmA 2, into a best-seller years after its release. The DayZ mod was unstable and prone to hacking from the people hosting games on public servers, but its simulation of what it would be like to scavenge in a coastal landscape after the zombie apocalypse was beguiling for its reality. This really felt like survival, and it required patience. In development since late last year, the standalone DayZ game was at E3 2013. It’s an early build of the game that is even rougher than the mod, but playable nonetheless and it shows a promise of things to come.

See zombie, shoot zombie. It’s as basic as you can get. Zombies have crippled society and you’re a survivor in the fictional coastal region of the ex-Soviet Chernarus, exploring 100 square kilometers, looking for survivors to pair up with and scavenge supplies. The only goal is to survive. That’s the game. Much of the story in the final version of the game will come from actual players interacting with one another in the world, rather than any written fiction actually placed in the game.

From zero to hero. The alpha version of DayZ at E3 2013 felt like a zombie itself. Some of the basics were in place. The game drops you into a random place in the map – near the water as in the mod, but the final version may spawn you inland – with nothing but your underwear.

Protect yo’ neck. You can wander around in third or first-person views, looking for guns, bullets, and other goods to help you survive. Finding a motorcycle helmet for your character, for example, will actually help protect you from a blow to the head.

The blows to the head are infrequent at this point. Zombie intelligence is still so limited that the flesh eating baddies will totally ignore you sometimes, and just fall over you other times. The game doesn’t even have melee weapons like axes included yet, though they’re planned for later on. The demo was also devoid of other players, and the build couldn’t yet accommodate linking the other demo stations together for a more full DayZ experience.

Miles to go. Artist Chris Torchia, who is making many of the items, pieces of clothing, and little bits that fill up the world of DayZ, was quick to defend the team’s baby on the floor. It’s easy to see why he’s defensive. The game looks like butt in its current state, a collection of rickety towns and fields that wouldn’t have looked out of place in a game from ten years ago. That’s fine, though. The game is still so early that it should look a little janky. They’re making sure it works before making sure it’s pretty.

Torchia also explained that the game is no longer purely based on the technology in ArmA 2, instead being formed out of bits of that game, the new ArmA 3 due out later this year, and a swath of brand new technology built special for the game. Like ArmA 3, the team plans to let people play DayZ in an alpha state so that they can help test the game as it’s made. Rough looks or not, the DayZ development attitude is in the right place.

Anyone chomping at the bit to play Day Z after digging into the original mod release will simply have to be patient. The game is far, far from ready, and the team isn’t ready to put any kind of timeline on when the final version is ready. Based on this demo, there’s a lot of work to go, but it’s impossible not respect the honesty of putting the game on display in this state. It shows confidence that this prototype will turn into something grand and worthy of the hype that surrounded that little zombie mod for an army sim last year.

With E3 2022 canceled, these are the summer gaming events to watch
DayZ creator pulls a 180 with Icarus, a new survival-crafting title
Death’s Door impressions: A macabre Nintendo love letter
Prime Day is over before it started with this Dell gaming laptop deal
Starship Troopers: Extermination turns sci-fi satire into a co-op shooter
Score $90 off an Alienware gaming chair for Cyber Monday
How to get Battle Tokens in Warzone 2.0
How to redeem Mystery Gifts in Pokémon Scarlet and Violet
Call of Duty: Warzone 2.0 desperately needs to give players more health
Don’t miss this Xbox Series S Cyber Monday deal — ends midnight
Now’s the perfect time to stock up on PS5 controllers
How to evolve Tandemaus into Maushold in Pokémon Scarlet and Violet
Fortnite Chapter 3, Season 4 guide: All week 10 quests and how to complete them