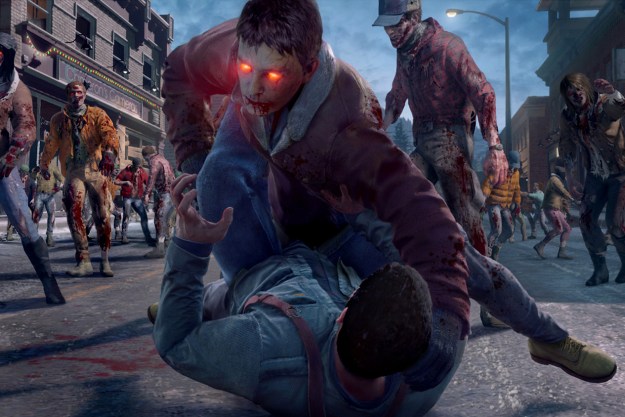 The Dead Rising series has earned a cult following because the technically impressive, campy carnage of its early entries scratched an itch few other games could. But Dead Rising 4 will likely leave many of those fans feeling colder than a froze-solid zombie on Christmas.

The core Dead Rising experience remains intact. Once again, Dead Rising 4 features some of the series’ best qualities, capable of sending a staggering number of zombies lurching your way. Its raw, unfettered mayhem — its main draw — is the best the series has ever featured.

The game, however, is unfortunately held back by its myriad technical problems, including a complete lack of endgame and half-baked multiplayer. Rather than full-fledged sequel, Dead Rising 4 feels like a nonsensical short story that falls way short of the campy writing fans have come to expect.

Dead Rising 4 wants to be a throwback to the series’ early days. Frank West, the series’ original protagonist, returns to the scene of the first game in the series: Willamette, Colorado. The original Dead Rising‘s zombie outbreak was restricted to the local mall. After 15 years, the city has erected a new, much larger shopping center in its place. And once again, it’s been decimated by the undead, this time during the controversial shopping holiday Black Friday.

Dead Rising 4 has eschewed the series’ signature countdown, which forced players to complete the story (and some of its optional missions) in a relatively short time, in favor of a more freeform open world experience. Players can complete story missions, tackle side activities or simply churn through zombies at their leisure.

Playing Dead Rising has become much less stressful since developer Capcom removed that timer element, but losing the timer has cost the game its purpose. The zombies were never meant to hold our attention on their own. In the past, the series was always as much a race against time as it was a slog against zombies. Without it, the zombies are simply animated speed bumps, getting in your way but never stopping you. Capcom might have pleased a wider variety of players had they provided the option to crank up the difficulty with a tight time limit, as it did in Dead Rising 3, but there’s no such option this time around.

The timer does make a brief comeback in the game’s co-op multiplayer, in which up to four players take on varying missions that must be completed during minutes-long in-game “days.” At the end of each day you and your teammates have to get to a safe house, harking back to the earlier games, yet without much of the previous urgency.

Besides a few uninspired unique goals like “take pictures of statues” most of the multiplayer missions amount to a remix of “kill X number of zombies with Y weapon,” plus boss fights every other “day.” The more missions you complete before you head to the safe house (which you have ample time to do once it opens up), the better your rewards, but there’s no punishment for not completing them, so there’s no tension.

Instead, Dead Rising 4 relies heavily on hoarding the blueprints that allow you to make wacky homebrew weapons and tools to motivate you through its story and side quests. For example, from time to time you will find new safe havens to clear of zombies, which frees the space up for survivors to move in and offer you clothes, maps, weapons, vehicles, and food for sale.

Dead Rising 4’s weapon and vehicle crafting system is more simple than in past games, letting you make new zombie-slaying tools whenever and wherever you want. As you locate more blueprints within the world you can combine more everyday objects into super-weapons, like a zombie-freezing ice sword, an explosive sledgehammer or a crossbow that shoots fireworks.

The same applies to vehicles; if you combine a hearse with a tow truck you get a morbid monster truck that can lob zombies from a coffin-shaped slingshot, while a snowmobile and an antique car make the “Cryonic Commando,” which freezes zombies and shoots snowballs.

Unfortunately, all this pure carnage is not enough to sustain the full game experience.

Many of the most outrageous blueprints are so well hidden that most players will probably miss a lot of them, but enough are readily available to keep the variety going through the whole game. Slicing, bludgeoning, burning, exploding, and freezing ridiculously huge crowds of zombies both inside the mall and outside in the larger town with these creative implements is the highlight of Dead Rising 4. And there are other fun additions like skill trees that lets you hone certain combat or survival abilities, and sequences where you put on a heavily armed exo-suit (which starts out fun but grows tiresome by the end).

Unfortunately, all this pure carnage is not enough to sustain the full game experience, which comes up lacking in other important areas.

The story begins with a surreal nightmare sequence in which Frank West, disgraced photojournalist, must confront the demon of his own ego. This prologue is then never mentioned again. In the game’s actual opening scene Frank West, now a journalism teacher, gets picked up by one of his students, Vicky Chu, for what he thinks is a night of mini golf. Why he would play mini golf with his student is never explained; apparently, they have some sort of relationship.

When Chu reveals they aren’t going to play mini golf, but instead are headed to a secret military research facility to break in and find evidence of illegal human experiments, West agrees to help for no discernable reason. Maybe he just really likes putting armed soldiers in choke holds. When the zombies hit the fan, Chu, now inexplicably mad at West, ditches him at the base and drives off.

Several months later, West, now disgraced and a fugitive, gets enlisted to travel back to the town of Willamette — which is now six weeks into a new zombie outbreak that, beyond all semblance of logic, has somehow been kept completely secret from the rest of the country.

From there Dead Rising 4 brings out the deadly mascot pirates, evil private mercenaries, wacky podcast hosts, surprise death cults, and ethics in zombie journalism (really). There’s a helicopter crash and a super-smart zombie who can spew nonsensical monologues but is surprisingly underutilized beyond a couple of scenes. There are “investigation” sequences where you spin in circles pointing your camera at things more or less randomly until the correct random object lights up.

The biggest crime here may be how incredibly hateable Frank West has become — he’s a terrible journalist, a terrible professor, and a terrible person, with literally zero redeeming qualities. There is absolutely a place in this world for things that are just plain stupid fun, but there’s no reason they need to be this stupid.

And there are bugs — oh, so many bugs. Vehicles get stuck on random geometry, and Frank does that thing where the game can’t figure out how to finish an animation so he walks in a wide circle or becomes totally immobile for 10 seconds while zombies assault him from all sides. Entire cutscenes play without dialogue or subtitles, so characters pantomime scenes you’ll never know the meaning of (until Capcom puts out a patch at least). This happened randomly throughout the game, including — incredibly — almost the entire final chapter.

The final chapter is, by the way, a complete mess. Dead Rising 4 is divided into six “cases,” not including the prologue (“case zero”). Cases one through five send you to various clearly delineated objectives around the town and the mall, with frequent distractions in the form of survivors to rescue, safe houses to clear out and “maniacs” (like the aforementioned pirate mascots and a murderous Santa impersonator) to kill.

Chapter six is a completely linear path from which you can never escape.

Chapter six, meanwhile, is a completely linear path from which you can never escape. It has one incredibly repetitive boss battle (the kind where you get the boss’s health almost all the way down and then it regenerates most of it back half a dozen times without ever changing any of its other abilities or mechanics). That’s followed by a chase sequence so buggy it borders on being unplayable. If you make it that far, chances are you’ll die repeatedly without ever knowing why (and those could very well be your only deaths the entire game).

When Dead Rising 4’s relatively short story mode is finally over, there’s no new game plus, and you are not given the option to jump back into the game world to complete side quests or find more blueprints.

If you want to go back, you’ll have to replay chapter five. You’ll save some progress, like unlocked skills and collected blueprints, but the game will always be blaring at you to head to the next story objective. It leaves the whole thing feeling unfinished, which it clearly is.

There are hints at a better, funnier game in Dead Rising 4. You can take a selfie literally at any point, and even make Frank do goofy faces with bloodthirsty zombies, mutilated corpses, clueless characters, or whatever else in the background. It’s legitimately hilarious and one of the only things that actually enforces the tone Dead Rising is going for. Also: every time you pause the game, no matter how dire the scene or intense the fight you’re in the middle of, a random jazzy holiday tune plays in the menu. You’ll get more than one laugh just from that.

There should have been more of that. Dead Rising 4 should be less buggy. The story should make more sense, and it should have been funnier. Not discount-Bruce-Campbell-funny like Frank West can be, but zombie-photobomb-selfie and inappropriately-timed-Christmas-music funny (seriously, the holiday setting is criminally underused here). Dead Rising 4 gets a few things right, but it gets many more tragically wrong, and ultimately isn’t worth most players’ time.

There are countless better open-world games, but players looking specifically for open world mayhem at this scale might be hard-pressed to find something that does the same exact thing. If you’re specifically looking for something with zombies, we recommend Dying Light, a first-person survival action game with many of the same systems as Dead Rising 4, plus some great parkour mechanics.

While finding hidden blueprints and making the crazy weapons they unlock might be worth a few extra hours beyond the dozen or so hours of story, the game lacks any endgame to direct your carnage.

Multiplayer, meanwhile, is uninspired and won’t have many players coming back for more.

If you’re a hardcore Dead Rising fan and all you want is to drive a motorized shopping cart with a lawnmower blade on the bottom back and forth on a zombie-crowded freeway overpass, then go for it. If you’re looking for a good video game, then no.