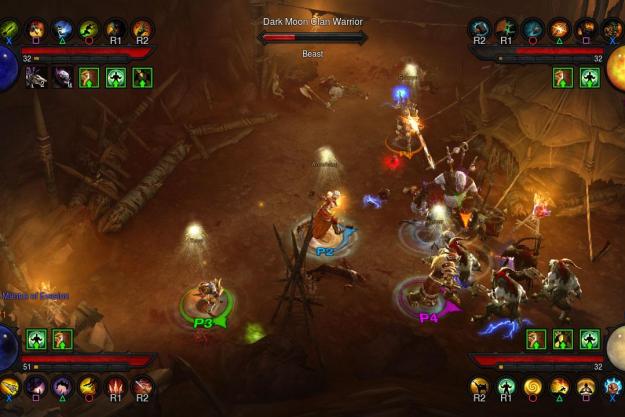 Diablo III doesn’t stumble onto consoles like so many sub-standard PC game ports before it. Blizzard’s work here shines. There’s even an argument that the definitive take on Diablo III is realized in its console release, a content-complete port that is bolstered by a combination of perfectly executed gamepad controls, a streamlined user interface, and a handful of experience-improving feature tweaks.

After more than a decade of mild-to-severe sequel anticipation, Diablo returned in 2012 with a forceful, re-energized take on the series’ click-and-hotkey-driven play. The new character classes, the spit-shined graphics, the ever-accumulating piles of loot… even after the extended absence, the old-school play and new-school look of Diablo III impressed us with its PC release. Read Ryan’s review for the full story on that.

Diablo III doesn’t stumble onto consoles like so many sub-standard PC game ports before it. Blizzard’s work here shines.

What’s changed so much on the console version, then? Very little, in terms of the actual gameplay. The story, the cutscenes, the locations, the monsters and bosses, the multiple playthroughs… everything. It’s all carried over directly from the earlier release, all the way up through the most recent patch updates. You can’t use your PC characters here, but you can enjoy the same post-release additions that they do now.

The only major feature removed for consoles is the widely criticized real money Auction House. The absence of a for-cash marketplace is a tremendous boon to Diablo III’s in-game economy. Loot drop rates, crafting prices, and a number of other moving parts have been tweaked to account for the shift in the economy. You’re seeing more rare loot on the ground as you play, and spending less in-game gold to create it yourself once you reach that point. The satisfaction of watching a fountain of loot issue forth from a defeated boss is never dulled.

There’s more treasure to be had as well thanks to the new Master difficulty settings, which mirror the PC game’s Monster Power. In addition to Diablo III‘s Normal, Nightmare, Hell, and Inferno playthroughs – each of which unlocks after completing the preceding one – players can also set the difficulty, at Easy, Normal, Hard, and five levels of Master. Monsters don’t just get stronger at higher settings, they also offer bigger XP and gold/loot rewards.

Local co-op is another big win. You can set out with up to four players on one screen at the same time. There’s something immediately gratifying about charging into combat at your friends’ sides… or sneaking in to vulture a tasty piece of treasure out from under them. All loot in local co-op is shared on a first-come, first-serve basis, unlike the online game’s individualized drops. Couch multiplayer grinds when it comes to gear shuffling, since only one player can browse the character menu at a time. It’s nonetheless a tremendous addition to Diablo III if you like to quest with friends over a couple of beers.

The absence of a for-cash marketplace is a tremendous boon to Diablo III’s in-game economy.

The real gem of Diablo III on console, however, is the gamepad-friendly control scheme. Blizzard takes all four face buttons and three of the four shoulder buttons for skill mapping (the fourth shoulder is for health potions). As with the PC version, skills default into different categories, but players can turn on an “Elective Mode” to map any skill to any button. The learning curve for using a character’s abilities is what you make of it, literally.

In place of precision mouse clicks, Diablo III on consoles uses an auto-target feature to ensure that your attacks reach their intended destination. It’s surprisingly reliable, even when there’s a thick crowd on screen. More than that, the success of auto-targeting highlights Diablo III‘s combat focus on reactive improvisation over measured strategy. There’s also a handy new dodge maneuver mapped to the right stick. It’s especially useful with melee-centric brawlers like the Monk and the Barbarian, but everyone benefits from an easier scramble away from enemy fire.

The only really shortcoming to speak of is a somewhat schizophrenic approach to the design. While much of Diablo III is re-tooled to be more console-friendly, there are still elements that lean too strongly toward a PC development mindset. There’s no tutorial to give players a sense of how complex, investment-required systems like crafting work. It’s the same as it was on PC, of course, but ready access to wikis and the like isn’t as easy to manage on a console.

That said, this is a series that encourages experimentation. Diablo III‘s progression system speaks to that, with no cost attached to shuffling around the abilities and ability modifiers that you’ve already unlocked into new character builds. There’s considerably less hand-holding here than most console games tend to offer, but, at worst, the only penalty is a little gold to spend patching up your damaged gear.

All of these points add up to a legitimately better Diablo III on consoles that we’ve seen on PC. For fans of the series that are jumping platforms now, Blizzard’s assembled a useful FAQ that highlights what’s different. Despite any changes, you almost get the sense that the game was designed from the outset with a mind toward being console-friendly. Maybe that’s true. Whatever the case, this early salvo of the 2013 holiday season is a powerful one.

This game was reviewed on an Xbox 360 using a copy provided by Blizzard.