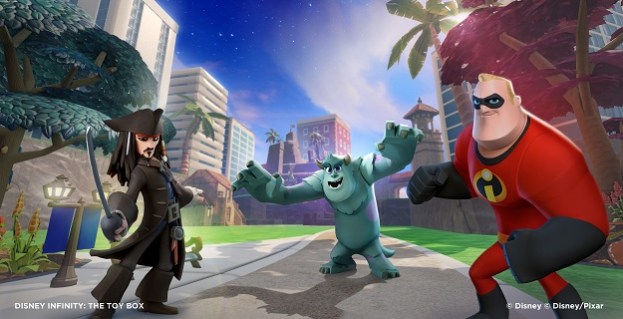 Some of my fondest childhood playtime memories involve epic fantasy wars waged between G.I. Joes, Transformers, Matchbox cars, and Star Wars figures. These improbable franchise crossovers are the stuff of youthful fantasizing everywhere. The playing pieces change from generation to generation, but the appeal bringing together favorite characters from different universes remains the same. In an era that has seen interactive entertainment evolve significantly, and a successful marriage of physical toys and virtual worlds thanks to properties like Activision’s Skylanders franchise, it was only a matter of time before someone got the bright idea of pairing those long-remembered epic battles of yesteryear with the new-fangled joys of video games.

Fortunately for the kid in all of us, it’s Disney that got there first.

Disney Infinity is the product of a multi-year collaboration between Avalanche Studios, the developer behind many of Disney’s more recent movie tie-in games, and the entertainment enterprise’s animation division, led by former Pixar chief John Lasseter. If you read Anthony’s report yesterday, then you already know that Infinity is equal parts Skylanders, LittleBigPlanet, and Minecraft. Physical toys serve double-duty as kid-friendly memory cards that store character information, but there’s also a significant content creation component in the game’s Toy Box mode. It’s an astonishingly ambitious set of bullet points that describe Infinity‘s myriad features, but it’s easy enough to grasp for those of us who remember bygone days of dumping out the toy box to stage an epic crossover.

“[With Disney Infinity], we wanted to emulate the way kids play, and so we needed to give you a lot of technological power to do that,” Avalanche CEO John Blackburn told us in an interview yesterday. The initial idea for the new endeavor actually came from the studio’s Toy Story 3 game, a well-received movie tie-in that scored points with critics for its Toybox mode, which allowed players to create full levels of their own, complete with a lineup of player-designated characters and missions. Completing objectives in the game would unlock more toys to play and design with in Toybox, resulting in a very satisfying feedback loop.

“We really felt when we did that one that we had found something that really resonated with people. Just seeing the way our own families played the game after the game was made, [we realized that] there was something kind of new and different here. It was creative gameplay, but it also had a deep moveset along with it, so it really allowed you to play in different ways. If you’re a customizer, you could do that. If you wanted to play more action gameplay, you could do that. That whole concept of buying which toys you want to bring into your world, we just felt like that was a cool paradigm,” Blackburn explained.

Avalanche was working on a follow-up that would elaborate on some of the successful ideas at play in Toy Story 3 when Disney Interactive co-president John Pleasants joined the company. It was Pleasants who pointed at the work that Activision was doing with Skylanders and suggested that Avalanche think more along the line of building a platform. From there, Disney Infinity was born.

“It was a really natural thing for us to go, ‘Look, if we can think about this as a platform for all of our franchises at Disney [it could be huge].’ Disney had been hesitant to do this in the past, but we haven’t had… an idea that the creative leaders of the company could get behind. We realized that the toys are the way to do this. We do it at theme parks, and it works to bring all the characters together there,” Blackburn said. “This was a way to support more properties by making everything into a toy and letting them support each other, and then they can kind of come into this Toy Box mode together. This was fall 2010 that we were doing this, and so we started to design virtual toys back then.”

In the years that followed, Avalanche worked quietly to build this loose set of ideas into the package that was at last revealed yesterday. The idea that started as a Toy Story 3 follow-up is now very much the sort of platform that Pleasants envisioned. Player profiles will be connected across all platforms that Infinity can be played on by the Disney ID infrastructure, while character progression data is stored with the action figures. The toys also double as gateways into the different franchise-specific Playsets, each of which offer roughly 4-6 hours of play, and up to 10 or more for the serious completionists.

Delivering Infinity In A Finite Space

Infinity will launch with three Playsets plus the Toy Box ready for anyone to access, but the disc contains more content than that. Avalanche is very much aware of the issues that gamers have with on-disc DLC, but it’s unavoidable with Disney Infinity. “We will have other expansion packs and more figurines that you can actually buy. Those will unlock that content off of the disc, so there’s no download associated with it. A lot of our consumers are not connected to the network with their devices in their homes, so we needed a way to make sure you could actually get that content so it’s actually stored on the disc already,” Blackburn explained.
The bigger challenge that Disney and Avalanche face is carrying player content across platforms from different manufacturers. The profile tied to your Disney ID is analogous to similar services maintained by other publishers, such as Electronic Arts’ Origin or Ubisoft’s Uplay. There have been some advances in the direction of true cross-platform play, notably with EA’s CloudCompete allowing for progression in Need for Speed: Most Wanted to carry between different paltforms, but these are details that still need to be worked out for Infinity.

“What we’re trying to do is make this as seamless as possible for the consumer, and [the platform holders] have all gotten on board with sharing the data that we can store to the physical toy. [This includes] the level of that toy, how much experience it has, and the economy that goes along with it. You can [improve your character] on any platform and then take the progress back and forth on the toy. When you get back on your primary device and you hook in your Disney ID, we then resolve what the latest state is of those things. So we can share basic information back and forth on the physical toys,” Blackburn said.

Dealing with created worlds and minigames across multiple platforms in Infinity‘s Toy Box mode is much trickier, but Blackburn explained that Avalanche is set on going bigger than just shared character data. “Right now we are trying to work [more cross-platform support] out with the hardware manufacturers,” he said. “A lot of them are willing to allow us to go back and forth to PC right now. It’s almost as if PC is like Switzerland. The problem with that becomes almost like laundering content through Switzerland. There’s technically no reason why we can’t do that right now, but we need to make sure all the platform manufacturers are comfortable with how we’re handling that content.”

To Infinity… And Beyond!

There are bigger question marks about the mobile execution of Disney Infinity. Blackburn shied away from answering any question relating to a possible PlayStation Vita release and he spoke only in general terms about how the game might look on other mobile platforms. “We’re definitely optimizing the mobile experience for both the timeframe that users usually play on the device as well as the [touch-based control scheme]. It’s not exactly like a character management sort of thing, but it is something that allows you to play with those unlocked toys that you’ve acquired in your collection and then make the transference of economy and experience meaningful,” he said.

Portable play aside, touchscreens create some interesting possibilities on the creation side of things. Blackburn even said outright that Infinity‘s user-generated content controls “works better on a point and click interface.” The Wii U is already confirmed as a supported launch platform, and the GamePad’s touch interace will indeed be used in world creation, but Microsoft’s SmartGlass and Sony’s PS Vita, which has the ability to double as a touch-enabled PlayStation 3 controller on certain games, present similar opportunities. Even Apple’s iPad is in the mix, as Blackburn confirms that the second-gen iOS tablet and its successors can all support the console/PC version of Infinity.

The June launch promises to deliver an elaborate, multi-faceted on-disc experience in Infinity, but it’s also only a starting point. “I totally want Marvel and Star Wars to be in here,” Blackburn said, referring to the two relatively recent Disney acquisitions. “As a developer, yes, I would love that, but those discussion are actually going on at a higher level in the company. There hasn’t been a decision made on that yet. There are so many possibilities with all the different characters from both of those franchises, it would be awesome to be able to have that.”

Beyond that, there’s also the creation aspect of the game. It’s a really cool thing to put your action figure down on a USB-powered pad and have it suddenly appear in your video game, but even cooler is the possibility of creating something – say, your Pirates of the Caribbean sailing ship – and then spending a little money to buy a physical replica of your virtual creation. MakerBot and similar technology is already capable of making that a reality, and it’s an avenue that Avalanche wants to explore.

“There’s been some pretty interesting discussion and some pretty cool technologies that we’ve looked at,” Blackburn said. “Right now, it is not in the plan, but I think that it is a very fertile area that we could go into.”