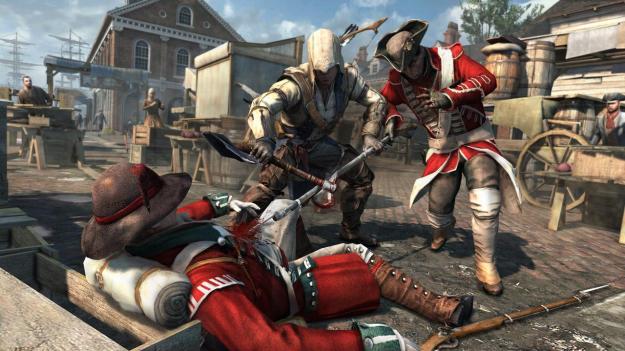 With E3 just slowly beginning to get started, Ubisoft once again joined the early risers and held their annual press conference the day before the show officially begins. Among the games on display was a new Just Dance title, another look at Assassin’s Creed 3, a closer look at the upcoming Far Cry 3, and an original new IP called Watch Dogs that will have everyone talking.

With Aisha Tyler acting as host, the gaming community in LA was treated with several games that will soon dominate the gaming landscape. Check back with us later this week for a closer look at Ubisoft’s upcoming titles.

To launch the show, rapper Flo Rida and the Ubisoft dancers (or maybe the Ubidancers? Perhaps the Dancing Ubisofts?) introduced the next game in the Just Dance series, Just Dance 4.

The game will continue the series that helped put dancing titles on the map. Expect more of everything: more dance moves, more tracks, and more modes. Just Dance 4 will be released in October of this year.

Up next, Ubisoft went about as far in the other direction as it could go from the family friendly confines of the Just Dance series. The clip for Far Cry 3 seemed to stray a bit from the previous titles, which focused on the idea that the main character was an average guy that was in the wrong place at the wrong time. The new clip gave a sense of power to the protagonist, and began with a naked woman giving what appeared to be a blessing of sorts to the main character, who then gave a speech to a gathered group of warriors that seemed almost Samoan.

With an arm covered in tattoos, the main character swam into a compound full of enemies and seemed to move with an almost preternatural speed and strength as he hunted the psycho Voss. Once in the enemy camp, the action heated up and the combat played out somewhat as you would expect a traditional FPS to play.

The demo ended after the main character fell into Voss’ trap and was stabbed with something that appeared to have some psychedelic properties. A short mind trip later, and the man you thought was Voss and was prepared to kill turned out to be someone else. It was a trip, and we probably won’t know the truth until the game is released later this year.

Although the Microsoft event may have stolen the thunder from the debut of the new Splinter Cell, but the first trailer for the game was enough to keep the interest level high.

Not much was gained in the way of story.  The Third Echelon is gone, and Fisher is now in charge of the Fourth Echelon.  We’ll have to wait to find out what that all means to the gamer, but we should see more on Splinter Cell: Blacklist later this week.

Next up marked the first of several Wii U titles, beginning with a game that until recently many thought was dead. Apparently having a game with the same characters that are starring in a billion dollar movie has some appeal. Who knew?

The clip was little more than a cinematic that showed Magneto and venom fighting with Spider-Man and Wolverine, with the rest of the Avengers arriving to watch New York burn. Expect more on this suddenly hot property in the coming months.

Although this game is primarily for Nintendo’s new console, it is tough to know what to make of the Wii U from this video and gameplay demo since the graphics are based more on a cartoon style that seems to have found a comfortable plateau. What was highlighted though was the Wii U’s tablet, which we will see plenty more of in the coming days.

In the trailer, two players used the new traditional Wii U controller, while another used the tablet’s touchscreen to play along. It looked like pure Rayman, and that is a good thing.

The next trailer was another Wii U title that was pure cinematic, and slanted for a mature audience. What was shown hinted at a zombie apocalypse taking place in London, but beyond that no gameplay or story was shown. This is one to watch though.

You may have heard of this one. If you don’t recognize that as a joke and truly haven’t heard of AC3, please turn your gamer card in to the property authorities. Without question one of the biggest games of the year, AC3 has alreadyrevealed the basics. It will take place over the course of 30 years and encompass the American Revolution, feature a new half-Native American protagonist named Connor, and once again pit the assassins versus the Templars.

In a new cinematic trailer, Connor is bearing witness to the American forces facing a rout at the hands of the British. As the Americans are broken and running, Connor spots his target–a British officer who is also a Templar–and he steals a horse to reach him. Surviving a hail of fire, Connor makes it to the British lines and decimates all those foolish enough to look at him funny. He then heads for the officer and ends him, which rallies the American troops and the watchful George Washington to attack once more.

Following the trailer, a section of gameplay began that showed Connor hunting deer in the wilderness. After taking one down with an arrow, a pack of wolves attacked. That barely slowed him down though, and soon Connor was in an American camp speaking with locals and soldiers. He wasn’t there long though, and soon found himself approaching a British fort. After hiding in the trees and attacking a lone soldier with a chain-like device, he then jumped into the middle of enemy troops. Using a soldier as a shield against gunfire, he made quick work of the enemy and then went back to the trees to sneak into the fort. Once inside, a well placed bullet caused an explosion to the gunpowder stores, and in the confusion Connor found and killed his target with prejudice.

There is a very good reason to be excited for this game. Check back with us later this week for more on this game.

ESports are a growing trend. With over 17 million viewers per month watching competitive gaming on Twitch TV, Ubisoft knows which way the wind blows, and so has introduced a new game tailored for the eSports scene.

Shootmania: Storm is still in the early stages and is a fairly straightforward FPS, but with a slant towards eSports. Among other things, the game will offer PC players the chance to connect and share their games on Twitch TV with just the touch of a button. This is still very much a niche game, but it is one that will resonate with the group it is going after.

An early contender for breakout hit of this year’s E3 was the final offering from Ubisoft, Watch Dogs. The presentation began with a story about the blackouts that struck the Eastern Seaboard in 2003. According to the trailer, the (fictional) cause of the blackout was a disgruntled hacker. The game then theorizes that with the advent of technology, there are more ways to hack into the world around us than ever before. Enter Aiden Pearce.

Pearce is a new type of protagonist. In the trailer, Pearce was on his way to a club in Chicago to meet a contact. Using his hacking abilities and some next-gen technology, Pearce was able to interact with the world around him in new and interesting ways.

Once in the club, his contact handed him a pistol. Pearce then used his abilities to hack several of the club goers to reveal personal info on them, until he came across an employee of the target, calling her boss to let him know Pearce was in the club. With the target en route, Pearce then headed outside after quickly dispatching a guard, and then proceeded to hack the city’s street lights to cause a wreck and immobilize the target–one of several options to complete the goal. A fairly standard third person shootout later (complete with a bullet time-like slow down effect), and the target was dispatched.

With each piece of technology Pearce came across in what seems to be an open world, the choices are incredible. There is a healthy dose of combat, but it is tempered with even more strategy and technology.

There are still several questions to be answered about Watch Dogs, but Ubisoft definitely concluded their show on a high note.