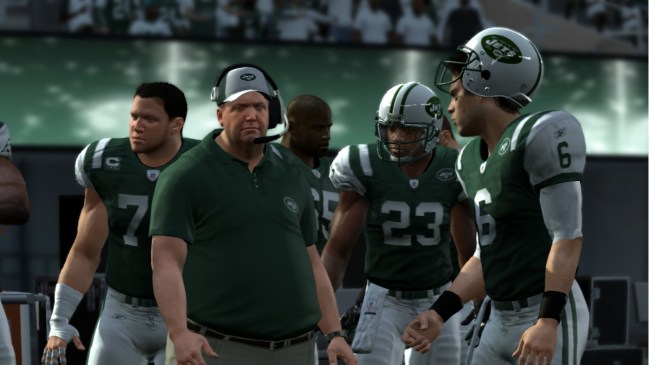 It is just a video game analysis, and nowhere near a scientific study. In fact, they are probably way off. In other words, please don’t kill the messenger, Bears fans! EA Sports has issued its picks for the AFC and NFC Championships to be played this week, with the winners according to EA will be the Green Bay Packers and the Pittsburgh Steelers.

The games were simulated using EA’s Madden 11, and while both games were close, neither were every really in question—errr…according to the video game that is. Nice, Jets fan…

In the NFC title game, the Packers took an early lead, and despite some back and forth between the two, the Bears could only tie and never lead. The Pack went ahead with a late touchdown and won the game 24-17.

It was a slightly different story in the AFC Championship, as the Steelers went up with an early touchdown, but the Jets struck back and took the lead. The Steelers went ahead again, but thanks to several field goals, the Jets managed to hold on until the closing minutes of the game, when the Steelers took back the lead with a late touchdown, sealing the game for Pittsburgh. The final was Steelers 21, Jets 19.

Now, before you Jets and Bears fans go off and snap your treacherous Madden 11 discs in half, while EA and sports simulators in general have been eerily accurate on picking the winner of major events, the results of the games leading up to the championships have not been nearly as close.

EA did manage to correctly pick Spain to win the 2010 World Cup by simulating the tournament using 2010 FIFA World Cup South Africa, but it had them playing Brazil in the Finals. 2K Sports used its Major League Baseball 2K10 to accurately predict a San Francisco Giants World Series win, but it had them beating the Yankees to do it.

So while EA’s Madden is an astonishing six out of seven when picking Super Bowl champions, it is not quite as accurate when it comes to picking the teams that might actually make it to the big game. So good luck to all the fans, you all have an even shot! It just might be that Packers and Steelers fans have a bit more of an even shot than the Bears and the Jets…