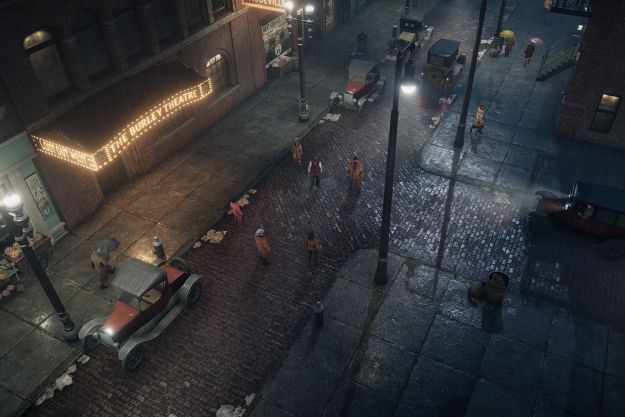 “Empire of Sin is a clever mob-management game with a strong setting, but some notable technical issues.”

Empire of Sin left-field pairing of 1920s prohibition storyline with high-level strategy game tactics works so well that it’s almost a surprise nobody thought of it sooner. It turns out that the world of bootlegging is a weirdly perfect match for a genre that’s all about managing operations and carefully plotting out each move. Who would have thought?

The creative strategy game is something of a wild passion project for Romero Games, an indie studio run by the married duo of John and Brenda Romero. According to Doom creator John Romero, game director Brenda Romero kicked around the idea for over 20 years, and those two decades of plotting are apparent in the final result. The game is as carefully planned out as its boozy crime operations.

Despite its rough edges and a desperate need for combat speed options, Empire of Sin is a confident prohibition-era history lesson that pulls together some of the best elements of RPGs and strategy and tactics games to create a memorable mob-management experience.

Empire of Sin is set in an alternate version 1920s Chicago where the biggest real-world gangsters of the time have convened in one place to vie for dominance. It’s almost like Super Smash Bros. for jazz-era nerds as familiar faces like Al Capone and Stephanie St. Clair engage in a citywide turf war. The goal of each playthrough is to be the last gangster standing when the gun smoke clears by executing each rival.

That setting is rarely used in the video game world, and it’s immediately delightful to soak in here. Bars are alive with dancing patrons, jazz music blares during scuffles, and there’s enough cigar smoke to choke a horse. It’s not shy about offering a romanticized portrait of the era, but it doesn’t sacrifice its commitment to historical detail to do that. In a time where video game worlds keep getting bigger and more outlandish, there’s something refreshing about strolling through Chicago’s modest streets.

The historical setting isn’t just for aesthetic showmanship. While the 1920s do present gameplay challenges for a flashy action game, Empire of Sin uses the slower pace of the period to its advantage. At its core, the game is the world’s most licentious city-management game. Players set up different rackets like speakeasies and casinos and need to carefully oversee them. Increasing a brothel’s word of mouth might bring in more cash, but it can just as easily invite a police raid. That constant balancing act makes building an empire into an engaging set of decisions that have a real impact on each playthrough.

It’s surprisingly easy to keep track of everything that’s happening thanks to straightforward menus. That’s a godsend for a complex game of this nature, which could easily overwhelm players with options. I always knew exactly how to set up a trade between gangs, bribe the Chicago Police Department, or change what liquor my bars are serving.

That constant balancing act makes building an empire into an engaging set of decisions that have a real impact on each playthrough.

The game does a superb job of rewarding efficient planning and money management. I felt like a true mob mastermind anytime a rival gang would show up at a high-value casino, only to be wiped out by the increased security I’d invested in. Moments like that are usually reserved for grand strategy games that deal with giant wars, like publisher Paradox Interactive’s 2020 hit Crusader Kings III, but that style of gameplay translates perfectly to the seedy intimacy of back-alley brawls and personal vendettas.

The management aspect is only one piece of the game’s DNA. Combat takes a tactics game approach à la XCOM, putting mob members on a grid in turn-based shootouts. Each recruit gets two actions per turn, which can be spent moving, shooting, using an item, or executing a special ability.

The familiar system works on two distinct levels. For one, it reinforces that idea that the player is a mob leader who’s literally calling the shots by instructing each of their underlings. It also resists the urge to turn the 1920s into a modern action movie, keeping scuffles a little slower and sloppier in a way that feels truer to the clumsy weapons of the time.

That deliberate pace doesn’t come at the expense of fun. There are still plenty of tricks for players to toy around with, as each recruit has their own skill tree and weapon proficiencies. Some characters can provide defense by attracting gunfire, while others can chuck axes at enemies. Those quirks keep fights fresh as players work on assembling a perfect crew of lackeys that cover one another’s weaknesses.

While the tactics element suits the subject matter well, there’s one major problem: There’s no way to automate or fast-forward through combat. Any time a player enters battle, they have to see it through to the end unless they choose to escape via exit points, which makes for some lengthy fights when characters start missing point-blank shots.

I stopped declaring war on rivals entirely at some point just to avoid getting locked in a wave of dragged-out grunt fights.

That’s not much of a problem in main story missions and raids on enemy safehouses, but it becomes a huge pain point when gang wars break out. While engaged in large-scale scuffles, enemies will attack a player’s rackets at random. Players have to manually go through each fight, controlling the low-level security guards who possess none of the fun abilities and perks that proper crew members have. In some instances, I was getting dropped into up to seven indistinguishable encounters in rapid succession. I stopped declaring war on rivals entirely at some point just to avoid getting locked in a wave of dragged-out grunt fights.

It doesn’t help that the game has some rough edges, which tend to weigh most heavily on combat. There are plenty of bugs, such as the game locking up in the middle of a character movement, crew members suddenly vanishing, or allies sliding around the battlefield as a living corpse. Most of those problems seem fixable (and many will hopefully be addressed in the game’s PC day one patch), but the current instabilities make for a somewhat unpredictable experience that can lead to unintended comedy or frustration.

A game of this nature lives and dies by its potential for role-playing, and that’s one aspect Empire of Sin has down in spades. Playthroughs feel distinct, as each gangster comes with their own set of abilities, perks, and central story lines. Even though the overall objective and sidequests remain the same each time, the way a player approaches them can be informed by their playing style on any given run.

In my first go, I chose Angelo Genna and played as brashly as possible, making enemies with everyone I crossed paths with and eventually getting gunned down in a cocky safehouse assault. My next playthrough was far more successful, as I used Stephanie St. Clair’s persuasive abilities to charm allies and enemies alike into fighting my battles for me. In a total change of pace, I turned Daniel McKee Jackson into a political suck-up who refused to say no to any lopsided deal a rival would throw his way in his quest to become Chicago’s mayor. All three of those runs felt unique and satisfying in their own ways, making me eager to try out more gangsters.

A game of this nature lives and dies by its potential for role-playing, and that’s one aspect Empire of Sin has down in spades.

The RPG aspect is aided by some light but effective dialogue trees and skill checks. Stats like persuasion and intimidation come into play and can totally change the outcome of missions. In one quest, I was tasked with taking out a rival’s posse. Rather than killing his lackeys, I convinced each one to join my cause, leaving him defenseless. Story beats like that provide a lot of payoff for players who follow a consistent vision of their gang leader.

Crew members have their own narrative depth, as each one comes with a backstory and traits that shape their personality. In my successful Stephanie St. Clair run, I grew a genuine attachment to my self-appointed right-hand man, Grover Monks, a former carnival worker with a fear of explosions after he accidentally blew up a concession stand as a kid. That level of detail makes every recruit feel like a fleshed-out character with a part to play in the empire.

Much of Empire of Sin’s fun hinges on the individual player’s own imagination and willingness to play the part of a gangster, and the game offers a wealth of systems and details that make role-playing an inviting prospect. When all of its genre pieces come together, it’s an engrossing historical fantasy that’s easy to get lost in.

Empire of Sin delivers a clever, genre-melding experience that perfectly marries the world of 1920s organized crime with strategy gameplay. Bugs and a lack of combat speed or automation options can grind its pace to a halt, but it does a stellar job of putting the player in the mindset of a mob mastermind (or a gun-toting buffoon) with streamlined speakeasy management.

Publisher Paradox Interactive’s own Crusader Kings 3 is the best strategy game out right now, but Empire of Sin is a little less intimidating.

A successful run can take up to 10 hours, and there are 14 characters to choose from, each with their own distinct story. Players can customize the amount of neighborhoods or gangs present to expand or shorten a playthrough’s length.

Yes. It’s a one-of-a-kind spin on the genre with some fun American Crime History 101 thrown in.

Topics
The best PS1 games of all time
The 10 best co-op games on Xbox Series X
The best fitness games for Nintendo Switch
The best Kirby games, ranked from best to worst
The best skills to inherit in Fire Emblem Engage
Dead Space: how to fix the centrifuge
How to fast travel in Forspoken
Star Wars Jedi: Survivor will now release in April following delay
How to get the Silver Card in Fire Emblem Engage
One Piece Odyssey’s great ending would have made for a perfect anime arc
Don’t need the Xbox Series X? The Xbox Series S is $50 off today
Tomb Raider returns as a mobile roguelike via Netflix
Samsung’s 49-inch Odyssey G9 gaming monitor is $600 off today