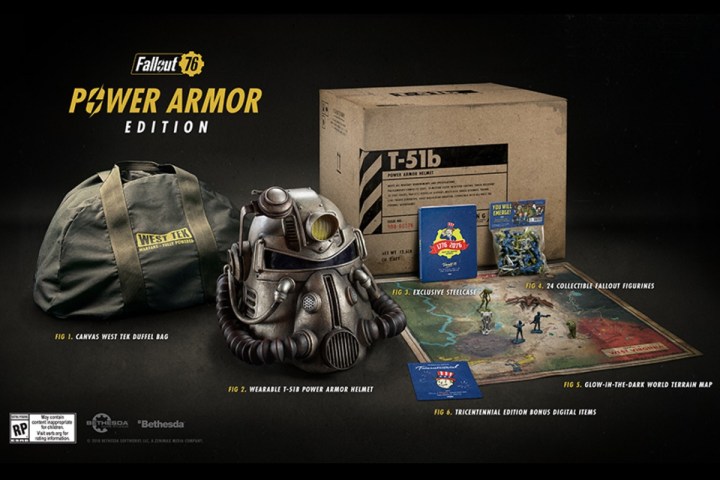 Fallout from Fallout? A special “Power Armor Edition” of the hotly anticipated game Fallout 76 promised premium items for a price tag of $200, but players are angry over what appears to be false advertising by Bethesda.

In addition to a copy of Fallout 76 and bonus in-game items, the Power Armor Edition includes a tricentennial steel book, a glow-in-the-dark world terrain map, 24 collectible figurines, and arguably the biggest draw of all, a full-scale wearable T-51B Power Armor helmet with a canvas West Tek duffel bag.

The package people are receiving has one key difference: Instead of the slick, military-style canvas bag, players are getting a cheaper nylon bag as the carrier for the Power Armor helmet.

@Fallout @Bethesda_ANZ @bethesda @DCDeacon is there any reason why we got a thin nylon bag instead of the canvas bag that was originally advertised? pic.twitter.com/oURZak2AEC

A look at the listing for the Power Armor Edition on Bethesda’s online store revealed that in the product description, the canvas bag is no longer mentioned, replaced by “nylon carrying bag.” The image for the special edition still shows the missing canvas bag, however, and it is still the one being used for listings in major retailers such as Amazon, Best Buy, Target, and Walmart.

Adding to the frustration for gamers looking forward to the canvas bag was an unusual response a player supposedly received from Bethesda, when he asked about the switch.

Man, they even lied about the physical goods. What a mess @bethesda. #Fallout76 https://t.co/M41zvxiM8F pic.twitter.com/kcZlUCxViZ

“The bag shown in the media was a prototype and was too expensive to make” and “We aren’t planning on doing anything about it” aren’t answers people expect to receive from customer support, prompting speculation that the reply from the Bethesda Gear Helpdesk was doctored. In a strange twist, it appears to be another gaffe for the publisher in relation to the issue.

The Bethesda Store&#39;s Support member is a temporary contract employee and not directly employed by Bethesda or Bethesda Game Studios. We apologize to the customer who took the time to reach out. The support response was incorrect and not in accordance with our conduct policy.

So if that response was incorrect, what was supposed to be the correct one? Unfortunately, it was not much better off.

Unfortunately, due to unavailability of materials, we had to switch to a nylon carrying case in the Fallout 76: Power Armor Edition. We hope this doesn’t prevent anyone from enjoying what we feel is one of our best collector’s editions.

These were not the same canvas bags that were advertised for the Power Armor Edition of Fallout 76, but it still does not sit well with players who were told that the reason for the switch to nylon bags was due to unavailability of materials.

Granted, Bethesda would have needed to make many more canvas bags for Power Armor Edition customers compared to the number of influencers that it hosted at the event. But it is salt in the wound to know that the items were given to streamers for marketing purposes, while paying customers received an inferior version of the promised bag.

It was unclear if Bethesda already knew by then that it would not be able to fulfill its promise of canvas bags for the Fallout 76: Power Armor Edition, but the consensus is that the publisher could have handled things much better.

Bethesda offered disgruntled gamers 500 atoms, worth about $5, as compensation for the switched-out canvas bag. It is clear when reading through Reddit threads that this is nowhere near enough to appease the customers, with calls for players to file legal complaints against Bethesda.

This comes on top of other issues related to the Fallout 76 Power Armor Edition, including delays that pushed Bethesda to send out codes for the game first, and a different shipping method than what customers paid for. With other things like triple nuke strikes crashing a server and a player stumbling into immortality, Bethesda might want to clean up its Fallout 76 act just a little bit.

Hitman 3 showcases how pointless ray tracing can be