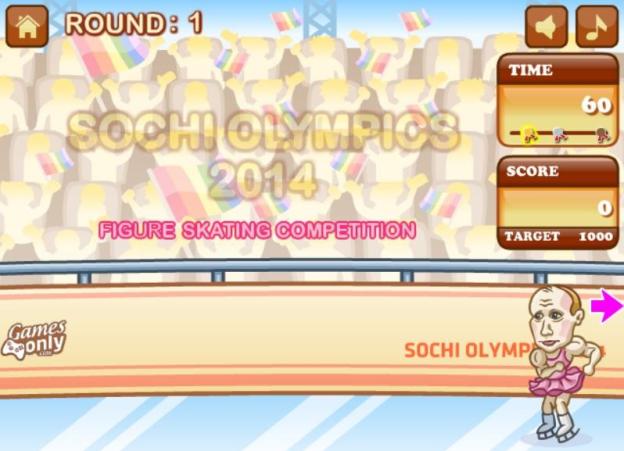 Prior to the start of the 2014 Winter Olympics in Sochi, Russian President Vladimir Putin earned his share of worldwide headlines due to his anti-gay rhetoric, and the anti-gay laws passed under his watch. The protests have been numerous and nearly continuous, with even companies like Google getting in on the action. One of the more creative protests, however, comes in the form of a Flash-based game, where Putin, appearing in a pink tutu, tries his hand at figure skating.

The game, titled Putin’s Olympic Game, was created by 23-year old Dutch game developer, Robin Ras, and features Putin in what the game describes as the “gay-friendly” sport of figure skating. Gamers take control of Putin as he skates against a backdrop of rainbow flags, Pussy Riot masks, and German Chancellor Angela Maerkel.

The game is available to play for free at GamesOnly.com.

“In the protest game: Putin’s Olympic Game, you can play the role of Putin, who will participate in a gay friendly figure skating competition at the Sochi Olympics,” the description reads. “Swipe Putin from left to right while collecting as many female objects as possible. Try to get the target within time. Try to avoid dangerous objects like: leather pants, time bombs and photo frames. Catch a wig for more bonus time!”

In 2013 Russia passed a law that outlaws what it deems as “propaganda” regarding “non-traditional sexual relations” around children. In theory, that means that anyone seen supporting gay rights by displaying something as innocuous as a rainbow flag could face a prison sentence. During the torch relay that led to the lighting of the Olympic Torch, signifying the official start of the Winter Olympics, a Russian protester did just that and unfurled a rainbow flag before being quickly detained by police.

Putin has tried to assuage any concerns over the laws as people from around the world flood into Russia for the Olympics. “We are not forbidding anything and nobody is being grabbed off the street, and there is no punishment for such kinds of relations,” Putin said. “You can feel relaxed and calm [in Russia], but leave children alone please.”

Unsurprisingly, the part about children did not go over well among gay and lesbian advocates.

“After all complaints about the Russia’s Anti-Gay Law, right before the Olympic games, we immediately had the idea of making a game out of protest,” Robin Ras said in a statement given to Gamepolitics. “In this game we portrayed Putin as a extremely gay friendly and that appeals to a large group of people.”

“Figure skating at the Olympic Games in Sochi has all ingredients to create a light-hearted game on this sensitive issue.”

Unlike real life, Russia retains its 2018 eligibility in ‘Steep: Road to the Olympics’