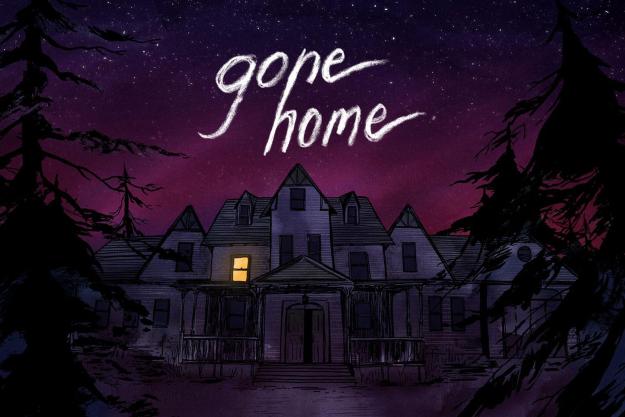 Gone Home is a haunted house story, but maybe not in the way you’re thinking. Ghosts of the Greenbriar family’s past linger in every hallway, room, and hidden passage. They’re held within the physical objects that you rifle through and inspect in your search for answers on a dark and stormy night.

Kate, the older of two daughters, is freshly returned to the Greenbriar home after an extended time away traveling in Europe. The house is empty when she arrives and the phones are dead thanks to the raging storm outside. The only hint of what’s going on is an apology note taped to the front door from Kate’s younger sister, Samantha. Sam for short.

“I’m sorry I can’t be there to see you, but it is impossible. Please, please don’t go digging around trying to find where I am,” Sam writes. “We’ll see each other again some day. Don’t be worried. I love you.”

Simple and effective, the brief note immediately ratchets up the sense of tension and sets up the mystery. The covered vestibule that you start the game in also presents a basic puzzle that amounts to a straightforward tutorial: the front door is locked, and the key has got to be around here somewhere.

The small team making up The Fullbright Company, a crew that, together, worked to cobble together BioShock 2’s wonderful Minerva’s Den DLC, focuses its efforts in Gone Home on story over action. This is a subtle work of interactive fiction, a tale driven entirely by exploration and discovery. Your progress is marked by an unlocking series of excerpts from Sam’s journal, all of them given life by the talented voice of Sarah Grayson.

This is a powerful work of storytelling, easily one of the medium’s strongest to date.

Gone Home’s gameplay is summed up well as you puzzle through getting the Greenbriar home’s front door unlocked. The key is hidden in a small cabinet, beneath a figurine. That corner of the vestibule is bathed in shadow too, so you’ve first got to switch on a conveniently placed lamp. Then you open the cabinet and move the figurine, revealing the key beneath it.

Lights, containers, and objects. These are your main points of interaction in Gone Home, all of it manipulated with single mouse clicks. It sounds dull, but there’s a quiet tension in every new scene, a slow pace that perfectly matches the game’s creeping sense of dread. Traditional rules of video game “fun” don’t apply; Gone Home offers a more cerebral experience, a tale that you puzzle through over a couple of hours. Everything you do is in service to teasing out more of the story, and the environment is built to reinforce that.

Closed doors open into dark rooms and light spills out from partially obscured entryways. There’s always a tense scramble to find the next light switch and a slow creep around corners. Scattered Greenbriar belongings can be picked up and examined or read, but they’re the disjointed flashes of a picture that you can’t see clearly.

Your unease is an intended byproduct of the growing mystery. Thorough exploration is rewarded with a deluge of information, about Sam, about parents Terry and Janice, about the deranged actions of a deceased uncle and the Greenbriar home’s local reputation as a “psycho house.” None of the pieces fit, but they all belong together somehow. The narrative that you’re actively building in your head constantly changes as new facts emerge that veer between unsettling and mundane.

This is a powerful work of storytelling, easily one of the medium’s strongest to date. Fullbright ditches traditional exposition in favor of this more interactive approach. You’ve got to slow down and take everything in. That you feel increasingly compelled to do so as you explore is a credit to the outstanding efforts on the part of the development team.

The most insightful and valuable analyses of Gone Home’s successes won’t be seen until after launch, once readers have consumed the story and rendered spoilers a non-issue. This is a game that requires further discussion and thought, and on multiple levels. The mystery of the Greenbriar family amounts to an elaborate puzzle, and your recognition of the full picture – a revelation that is expertly held back until the absolute final moments – is a breathless realization.

Gone Home is a game that can be played by anyone, and should be played by everyone. It is an outstanding achievement, both for gaming specifically and for storytelling in general. You can’t possibly get a sense of how powerful it is as a standalone work of fiction until you actually sit down and play the thing. So go do that. Now.

(A couple of small changes were made to correct some typos in this review. Thanks to commenter milomaniac mark for pointing it out.

(Images and video © The Fullbright Company. All rights reserved.)