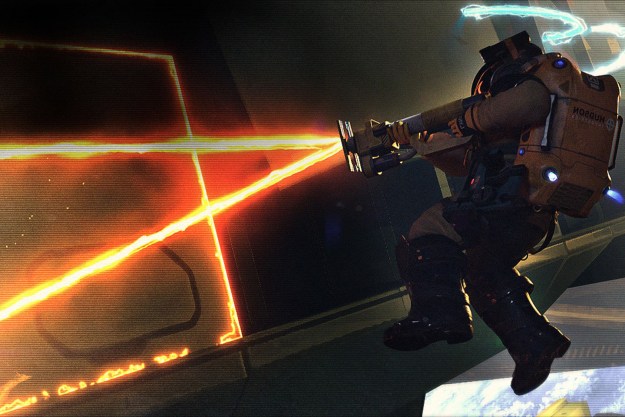 “Hardspace: Shipbreaker is an intricate anti-puzzle game that delivers a searing commentary on corporate abuse.”

Hardspace: Shipbreaker may be a science-fiction game set in outer space, but it’s as down to Earth as a Woody Guthrie song. If you don’t walk away from it questioning whether or not you’re getting treated fairly at work, there’s a chance you might be one of the bad bosses that it dissects.

First released in early access back in 2020 (and now reaching its 1.0 launch alongside console ports), Hardspace: Shipbreaker has an unusual, remarkable premise. The first-person game tasks players with reverse engineering spaceships in a zero-gravity shipyard and salvaging every last scrap of metal. If that sounds more like a job than a game, you’re right. Beneath its oddly satisfying hook, the sci-fi title pulls apart modern labor issues like one of its intricate ships — one OSHA violation at a time.

Hardspace: Shipbreaker is a mesmerizing anti-puzzle game that isn’t afraid to tackle serious topics like workers’ rights and unionization, even if it has to be a little repetitive to accomplish that.

When Hardspace: Shipbreaker begins, players quickly come face to face with the most crippling form of disempowerment: Debt. It turns out that getting a job with the solar system’s mega-powerful Lynx Corporation comes with a whopping price tag that leaves new employees over one trillion credits in the hole on their first day on the job. While “shipbreakers” make a daily wage from dissembling ships, 100% of that money goes towards cutting down a debt that barely ever seems to dwindle. It’s a darkly comedic premise that doubles as a smart inversion of gaming’s old “numbers go up” hook. The lower the number, the better.

Hardspace: Shipbreaker is a workplace comedy of errors.

While breaking down ships is a tedious job in the game’s universe, developer Blackbird Interactive turns the task into an ingenious engineering puzzle. The goal is to tear giant spaceships apart piece by piece in a series of 15-minute shifts, making sure not to damage valuable components (doing so will add to the debt). Each ship is an intricate puzzle made up of aluminum and nanocarbon joints that can be sliced up with a laser cutter. There’s an immense gratification that comes from carefully carving up a ship like a Thanksgiving turkey and sending every single scrap to its proper salvage bin (furnace, barge, or processor) until the entire vessel is gone.

But like most jobs, there are always complications — and that’s where the game finds tension in tedium. For one, the entire game takes place in zero gravity, which can get admittedly nauseating. When I carve a panel off a ship, it’ll start drifting away in space. That leads to almost slapstick work mishaps where I’ll grab a stray airlock panel with my trusty gravity gun … only to yank it too aggressively, causing it to bash into my helmet, cracking it open and leaving me for dead.

At moments, Hardspace: Shipbreaker is a workplace comedy of errors. As players rank up their certification, they’ll have to tackle more complex ships that throw new wrinkles into the mix. Reactors will explode if not salvaged fast enough, a miscut wire can fry all nearby electronics, and an accidental fire can have a panic-inducing snowball effect that blows the entire ship to smithereens. Workplace accidents are often hysterical, straight out of Homer Simpson’s playbook, but the threat of disaster also makes each move feel tense, as if players are choosing which wire to cut on a ticking time bomb.

The blend of high-stakes drama and oddly soothing ship deconstruction works surprisingly well together. When I get into a flow state, I feel like a veteran shipbreaker who knows exactly how to safely depressurize a ship before cutting into its hull or how to safely uninstall a nuclear reactor. Other times, I make a rookie mistake that hits me like a good jump scare. The Lynx Corporation is the game’s big bad, but falling asleep on the job is a close second.

Power in a union

While the puzzle-like ships are the central focus of the game, the story happening around the workday gives the gameplay purpose. As players rank up their certification, story bits are naturally weaved in via emails, voice logs, and intercom chats with co-workers. Primarily, the game’s campaign revolves around Lynx’s shipbreakers secretly trying to unionize — a move that the corporation wants to shut down at all costs (sound familiar?).

The gameplay itself adds urgency to that loose plot thread, even if it’s happening in the background. All of those tense moments where a ship can explode or a shipbreaker can die with one false move highlight how dangerous the work is. There’s no space-OSHA to protect shipbreakers from unsafe conditions. In one bit of dialogue, a bad manager forces an inexperienced worker to extract a nuclear reactor, which almost leaves them dead. All that matters is that Lynx profits.

The game plays with that idea in a satirical manner that’s both funny and uncomfortably true to life. Shipbreakers don’t own any of their gear at the start of the game. They have to rent it from Lynx each shift, adding to their debt. It’s not that silly a detail considering that teachers in America are no strangers to buying their own classroom supplies. The game’s biggest escalation of that joke comes every time a player dies on the job. They’re instantly cloned and replaced, but they’ll have to pay Lynx for the inconvenience (don’t give Amazon any ideas).

As someone who comes from a family of manual laborers with deep union ties, Hardspace: Shipbreaker’s story feels incredibly familiar. My uncle has throat polyps, which were likely caused by his years working as a “sandhog” on Boston’s Big Dig. My grandfather worked as a Navy electrician during World War 2, and he got radiation-induced throat cancer after being sent to Japan to wire American camps shortly after America dropped atomic bombs there. Later in life, he developed mesothelioma from working in an asbestos-filled newspaper office. Hardspace: Shipbreaker’s accidental injuries hardly feel more fictional than the multi-generational reality I’ve seen firsthand.

It’s a shining example of how video games can use the unique power of interactivity to strengthen narrative. By putting players in precarious situations, Hardspace: Shipbreaker lets us experience tense working environments from a safe distance. Even when the accidents are absurd, Blackbird makes its point about the importance of worker protections clear.

Seeing the game’s story through to the end requires a surprisingly large time commitment. The three-act story takes around 30 to 40 hours to fully complete and the gameplay itself doesn’t fundamentally change in that time. Players will gain access to new ships, more small complications, and a tool or two, but the day job remains the same even as the narrative stakes escalate.

Hardspace: Shipbreaker is undoubtedly a repetitive game. While I binged its first 10 hours, my sessions were more spread out after that. Getting through the story started to feel like a job. And while that can be leveled as a knock against the game, it’s also crucial to its message. The life of a shipbreaker isn’t supposed to be glamorous and exciting. In-universe, the Lynx Corporation is grinding its employees down with repetitive, unrewarding work. Anytime I feel exhaustion when starting yet another shift, the game effectively makes its point.

Still, that highlights some tension with video games as a storytelling medium. Some stories or topics call for gameplay decisions that might not always be enjoyable and that can conflict with the perception that video games as “fun.” Blackbird adds in some extra hooks to help find that balance. Players can unlock stickers by doing certain tasks, which can be placed on tools. There are upgrade trees and collectibles to find. There’s even a “race” mode in the final release that feels built for speedrunners. Though considering the core gameplay loop hardly changes, those extra perks can feel as superfluous as a ping-pong table in the office.

It’s ultimately not a major knock against the game. I have the utmost respect for Blackbird’s commitment to the project, which has developed wonderfully through its early access run. Hardspace: Shipbreaker is a bold project that’s not afraid to be blunt about corporate abuse and the power of unionization. While it feels like the final product could have better paced the way it teaches new mechanics or truncated its overlong story, there’s purpose and power in its use of repetition.

It might feel like a job at times, but so does Destiny 2. Hardspace: Shipbreaker is just more honest about it.

Like its spaceships, Hardspace: Shipbreaker is an intricately crafted project that’s worth dissecting. Its satisfying reverse engineering gameplay is relaxing and tense in the same breath. Though what’s more impressive is the way that core gameplay is used to reinforce big picture ideas about worker’s rights that feel timeless, even in its sci-fi setting. The final campaign can feel like a grind due to its repetitive nature, but it’s a functional design decision that puts the emphasis on intellectual challenge over physical demands.

Death Stranding might be its closest comparison if you want something a little flashier. Both games turn menial labor into compelling mechanics to serve a grand narrative.

The story content will likely take around 30 to 40 hours, but fully escaping debt will take much longer. Extra modes and leaderboards give it long-term appeal, though it can get repetitive.

Yes. Hardspace: Shipbreaker is truly a one-of-a-kind title with a lot to say and satisfying gameplay to support its message.

Hardspace: Shipbreaker was reviewed on PC.