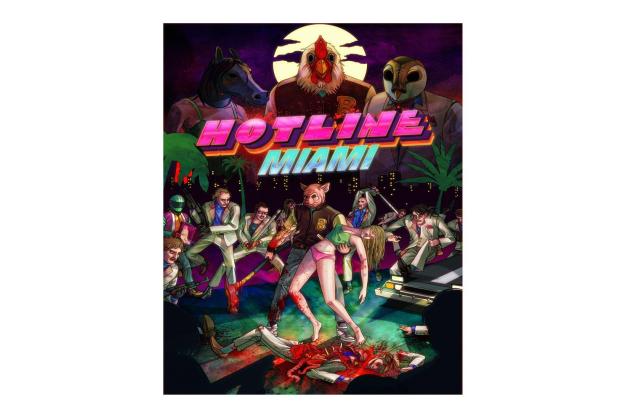 [Author’s note: We didn’t do a formal review of Hotline Miami when it was released in 2012, so we’ll be diving a little deeper here than we normally would with a port.]

Hotline Miami is a simple idea, executed perfectly. Pun intended, considering that the focus of this retro-styled action/puzzle game falls squarely on very graphic murder and mayhem. Your animal-masked avatar moves swiftly through one bite-sized chapter after another, clearing out room after room with a variety of blunt instruments, firearms, and skull-caving kicks to the head. Blood spills across the floors freely as an invisible timer ticks away, tracking and rating your progress. All the while, a psychedelic soundtrack warbles along in the background, lending a distinctly surreal pall to the proceedings.

The game is entirely the work of Dennaton Games’ two-man team, Jonatan Söderström and Dennis Wedin. Like many of the best indies, the duo delivers living proof that sharp design and a clearly defined sense of style can trump the photorealistic spectacle of a triple-A production. And that’s exactly what Hotline Miami is: one of the best indies – and video games overall, to be clear – we’ve played in recent years.

The story opens in April 1989 with your nameless, Letterman-jacketed sociopath receiving a phone message instructing him to go to a specific address for seemingly innocent reasons. It turns out that this is just a front, and that your true goal is to hide your face behind an animal mask (of your choosing) and murder everyone that you see. Each chapter plays out in this manner, with a semi-coherent plot slowly taking shape as the calendar moves through May, June, and July. Details fill out between each chapter as you visit a variety of local stores and bars – all staffed by the same, unusually friendly, red-headed stoner-dude – and receive infrequent visits from a trio of seemingly prescient masked strangers.

All of the play and exposition in Hotline Miami‘s 8-bit world is delivered from a top-down perspective. A typical chapter begins in your apartment, where a waiting answering machine message contains your latest set of instructions. You hop in your car and head over, at which point a list of mask options pops up. New masks unlock from earning high scores in each chapter, as well as from finding secret collectibles. These offer a different benefit, challenge increase, or easter egg-like tweak.

Once you’ve chosen a mask, you head into the chapter’s designated location and clear it of all human life, with your targets typically spread out over multiple, checkpoint-dictated floors. The brutal action moves along swiftly, with both your own attacks and those of your enemies capable of one-hit kills. Repetition is key here; you die frequently, but each new death ostensibly gives you a better sense of the patrol layouts on a given floor. Enemies can be bludgeoned or shot, but you can also knock them down using doors, thrown objects, or even your fists. You can then finish the job with an appropriately gruesome execution.

The trick to mastering Hotline Miami is getting a sense of its rhythm. Reckless play is punished severely, and impatient players will quickly become frustrated at the parade of checkpoint restarts. Taking an overly cautious approach carries its own disadvantages as well; it hurts your score. There’s also the constant danger of a single mistimed attack leaving you vulnerable to yet another one-hit kill. It’s something that can happen at any time, whether you’re 10 seconds or 10 minutes into a given checkpoint.

Success calls for a thoughtful balance then, between care and carelessness. Sometimes, your best option will be to rush into a room with your melee weapon swinging wildly. At other times, you benefit most from waiting out the AI until your targets line up just so. Once the enemy is on to you and reinforcements start to rush in, quick thinking and sharp reflexes are necessary. The flow ebbs back and forth between strategic positioning and harried defense, all in the space of a chapter that can be beaten in a matter of minutes when played perfectly.

If there’s any shortcoming it’s in the stone-dumb enemy AI. Unless you’re spotted or gunshots are heard, your foes pay no mind to the carnage that you leave behind you. It is entirely possible to cut a two-man patrol in half – with the victim bleeding profusely on the floor through a softball-sized head wound – while the survivor continues on completely unflapped, blissfully unaware that he’ll soon meet a similar end. Reinforcing baddies also have a tendency to blindly rush to their doom like lemmings, following a direct path into your swinging bat waiting just around the corner. These are shortcomings that can be exploited, but you’ll feel dirty about it every time.

The new PlayStation 3/PlayStation Vita port of Hotline Miami is a near-carbon copy of 2012’s PC release. Twin thumbstick/button controls replace the mouse/keyboard of course, though this mostly boils down to player preference. The Vita version employs touch-based targeting, though doing so can be difficult when you’re being rushed. The Sony platform releases also bring in the expected crop of Trophies and leaderboards, as well as a bonus mask collectible, but the two versions are otherwise exactly the same.

Hotline Miami was one of the strongest games of 2012 and it is a welcome arrival this week on Sony’s console and handheld platforms. The two-man team at Dennaton achieved something truly special with this relatively low-fi game, couching the straightforward-yet-challenging play in a grim and instantly absorbing fictional world that is further brought to life by the swirling psychedelic soundscapes. It’s never to late to jump on with an exceptional game, and whether you go PC or PS3/Vita, this one is definitely worth your time.

Monster Hunter Rise is coming to PlayStation and Xbox, minus cross-platform saves
Call of Duty: Warzone Mobile: release date and preregistration details
All cross-platform games (PS5, Xbox Series X, PS4, Xbox One, Switch, PC)
Amnesia: The Bunker takes survival horror into a ‘semi-open-world’ sandbox
Pokémon Scarlet and Violet Titans guide: locations, weaknesses, and more
The best weapons in Modern Warfare 2: every gun ranked
Pokémon Scarlet and Violet: How to beat the Elite Four
The best Intel processors for 2022
Best gaming laptop deals: Save on Alienware, Razer and more
‘Wordle’ today, December 2: Answer, hints, and help for word of the day (#531)
Elden Ring for PS5 is $15 off with delivery in time for the holidays
The best iPhone games to play in December 2022: Marvel Snap and more
The best Android games available right now (December 2022)