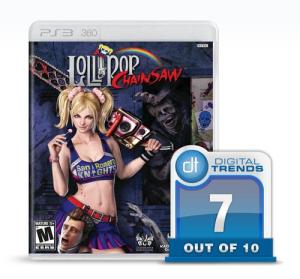 Lollipop Chainsaw is the latest game from Suda 51 and his talented team at Grasshopper Manufacture, and it’s pretty typical for a Grasshopper release in a lot of ways–for better and for worse. There are great ideas and hilarious writing coming out of the game’s every pore, but the entire experience is marred by a technical execution that ranges from tedious gameplay to downright questionable design choices. It’s a fun game to play in a lot of ways, but it’s definitely going to hurt as well.

In Lollipop Chainsaw, you step into the teen-sized sneakers of Juliet Starling, a high school cheerleader who moonlights, along with the rest of her family, as a chainsaw-swinging zombie hunter. Those skills prove to be conveniently handy when the school’s Goth-iest outcast, Swan, cracks open the barrier between reality and the Rotten World, creating a zombie army that would make George Romero proud. The task of clearing the walking dead out of San Romero High School falls to Juliet, a job that she embraces wholeheartedly as she slices her way through six levels, taking out the Dark Purveyor boss at the end of each one.

Juliet’s primary mode of attack is the titular chainsaw that she carts around, though she can also call on the fancy footwork that her cheerleader training gave her to deal out a variety of undead-stunning kick-based combos. The initial range of combat options boil down to light and heavy chainsaw attacks, kicks, and jump-based variants for each of these, but coins you collect as you proceed through the game can be spent at on the store on additional attack combos, as well as character upgrades (like health and strength boosts), MP3s for use as custom background music, and alternate costumes.

Those basic parts all work in the context of the hack ‘n slash adventure that Lollipop Chainsaw is, but there’s a lot less depth than there initially seems to be. It quickly becomes clear as you unlock new attack combos that there are really just a handful of highly effective buys that you’ll generally want/need to spam as you fight to stay alive. The more effective you are at taking out multiple zombies in one combo, the more you’ll receive a “Sparkle Hunting” cash bonus for accomplishing the feat. The game’s strongest combos are the ones that maximize your chances of nailing a Sparkle Hunting bonus, and there are only a few of these.

As a result, the game’s strong start soon settles into a generally repetitive process of culling the zombie hordes with the same set of spammed attack combos. There are different variations on the zombies you’ll fight, of course. Some can fly, some will shoot things at you, some will glow blue and then charge you, knocking you to the ground. This last bunch is particularly pesky. Whenever one of the stronger zombies knock Juliet to the ground, you’re forced to mash the B button (on an Xbox 360 controller) until she gets back up. It’s such a frequent occurrence later in the game that you’ll undoubtedly find yourself shouting at the screen in frustration as you’re knocked down in this way three or more times in quick succession.

The length of the game is also an issue. Each of Lollipop Chainsaw‘s six levels is fairly long, but none of them will take you more than two hours to get through. Most take less, closer to the realm of 60-90 minutes. That’s really not a lot of game. There’s replay value in running back through the story in search of collectibles, and also in playing through the Ranking Mode to score better times in each zone. That’s still not a lot for a full-priced game though.

That’s the bad news. The good news is that Lollipop Chainsaw is so patently weird and batsh*t insane, that you’ll rarely spend much time fussing over how boring the gameplay can get. The characters alone make it worth sitting down and spending some time in Juliet’s world. She’s this badass valley girl with a love for cute things and zombie entrails. Her two sisters and father get equally weird, but the game’s standout is Juliet’s high school sweetheart, Nick. Bitten by a zombie before the game even begins, Juliet removes Nick’s magically preserved head and carries it around on her belt. You get some great puns out of that gag alone, but Nick is a fun, well-rounded character as Juliet’s straight man counterpart.

Then there’s the story and the strange places it leads you to. Each of the game’s levels has a specific theme that carries over not just into the types of zombies you encounter but also the minigames you’re tasked with completing. This works to varying degrees. A farm level puts you behind the wheel of a large threshing machine; it’s cute to mow down zombies the first time around, but when you’re asked to repeat it later — with a target body count of 300 — it’s hard not to sigh in frustration. Another level set in a video arcade works much better, running Juliet through a series of minigames modeled after classic coin-op titles.

That variety within each level sticks around all the way through to each boss fight with a Dark Purveyor. All of Lollipop Chainsaw‘s bosses are imaginatively designed creations that feel like a perfect final note to end each level on. The fights themselves are also three-stage affairs in which you’ll have to adjust your strategy as the boss takes on multiple forms. The feel is similar to that of playing one of those classic coin-op hack ‘n slash games, like The Simpsons Arcade. As was the case in No More Heroes, Goichi Suda’s love for gaming’s formative years shines brightly throughout Lollipop Chainsaw.

Holding everything together is James Gunn’s story and script, which hits all the right, over-the-top notes. This is a very campy comedy-horror adventure, and you can definitely see how the Tromeo & Juliet director could have turned this into a Troma-produced feature film. Lollipop Chainsaw isn’t a bad game in spite of its flaws, but the most fantastic thing about it is that we may yet see another Suda/Gunn pairing.

The hardest part about this review is coming up with a score for the game. Lollipop Chainsaw is something that anyone who is serious about their video games ought to play the crap out of. It’s not particularly well-designed and visually it’s only a step or two above a PlayStation 2 game, but the creativity fueling its many moving parts is marked by such unrestrained brilliance that you’d be doing yourself a disservice in skipping it. You may well end up hating everything you’ve played by the time the credits roll, but you’ll also undoubtedly end up looking back on your time with Lollipop Chainsaw and end up smiling at all of the crazy bizarre nonsense it constantly assaulted you with.