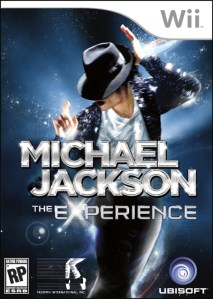 Michael Jackson may be dead, but his career is booming. Ubisoft revealed today that since its release last November, Michael Jackson: The Experience has sold 3 million copies around the world on the Nintendo DS, Wii, and PSP alone. The game is scheduled to be released for the Xbox 360 and PlayStation 3 next week.

“We’re delighted with the sales success of Michael Jackson The Experience to date,” said Ubisoft’s UK marketing director Murray Pannell told MCV (via Gamasutra). The game has performed exceedingly well in the U.K., selling 319,000 units in the country.

Michael Jackson: The Experience is a dancing game in the same vein as Dance Dance Revolution or Just Dance. The game came loaded with a number of popular Michael Jackson songs and a special edition sold with a white sequined glove, much like the one Jackson often wore during a portion of his career.

For those craving still more MJ, a feature-length film based on Thriller is in development. A new studio album called Michael is also available.