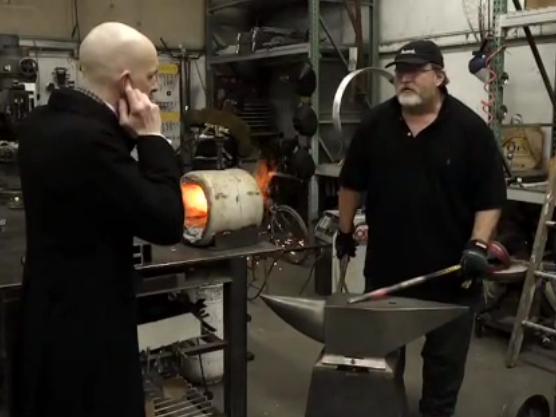 They say the pen is mightier than the sword, but historical fiction writer Neal Stephenson is taking some time off from his Bic ballpoint in favor of pointier alternatives, to bullish effect. The author of Cryptonomicon and Snow Crash is working on a new project that would bring more realistic sword-based combat to the realm of first-person gameplay. Two days into fundraising on Kickstarter, Subutai Corporation, the company founded by Mr. Stephenson to create Clang, an open-source swordfighting developer toolkit, has already received over $190,000 of its stated $500,000 goal and still has 28 days left until its July 9 deadline.

The Kickstarter fund, if successful, will be used to produce a playable prototype focused upon hyper-realistic hand-to-hand combat that third-party developers would then be able to expand upon. The initial game, says Stephenson in the Kickstarter launch video, will be “an arena game with lots of fighting – not a whole lot in the way of plot or character development.”

“But,” he continues, “that’s kind of what we do for a living, so we can always add that stuff in later once this thing is up on its feet.”

Despite Clang’s stated plans to keep its goals basic, it’s not having any trouble attracting the interest of investors and partners alike. In addition to its wildly first 48 hours of fundraising, cameos by Gabe Newell, co-founder of Valve (Half-Life, Left 4 Dead) in the project’s Kickstarter video, have hopeful fans speculating that Valve will use the Clang API (application programming interface) once its available to improve its already-popular Half-Life series.

The project hopes to play on the eagerness of, as Stephenson says, “geeks in suits of armor, geeks in front of computer work stations, a lot of people out there who like to play games with swordfighting in them who might be ready to step it up to something a little bit more interesting.” Or, as Gabe Newell is quoted as saying later in the same video, “Every thirteen-year-old kid on Earth wants to see a knight fighting a samurai – no, wants to be a knight fighting a samurai.”

Mr. Stephenson’s own passion for real-world swordfighting – which he discovered while doing research for his novels – is evident in the Kickstarter videos on the fund’s page. In one, Stephenson expresses his frustration that swordfighting games offer a fraction of the customizability of first-person shooter games:

“When we play any given sword-based combat game, we’re left with a glaringly absent suite of customization options… The obsessive attention to real-world detail, so interesting to people who play shooters, has been absent in the sword world, despite the fact that there’s a galaxy of real weapons styles and variations just waiting to be incorporated into games.”

Stephenson says he hopes because he is “nerd famous,” he will be able to attract support for the project and it looks like, so far, the nerds are coming through.

The Xbox Series S is in stock, arrives by Christmas, and has a discount!