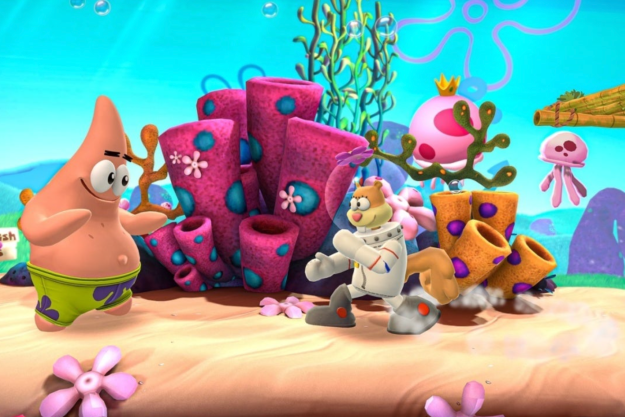 “Nickelodeon All-Star Brawl is a must-play for the hardcore, but doesn't look after casual audiences.”

With the announcement of the new Super Smash Bros.-inspired platform-fighter Nickelodeon All-Star Brawl came endless discussions of the game becoming the “Smash killer.” While it doesn’t quite live up to those lofty expectations, it definitely delivers with a strong competitive experience and a deep mechanical system that warmly welcomes hardcore players. But in my time with the game, I found that may be all there is to All-Star Brawl.

Nickelodeon All-Star Brawl is a new crossover fighting game by Ludosity, the team behind the critically acclaimed platform-fighter Slap City. The game stars some of Nickelodeon’s most iconic and obscure characters, with the likes of SpongeBob SquarePants and Reptar thrown into an arena to battle it out Smash Bros. style.

While its main claim to fame is being “Smash but with Nicktoons,” upon playing NAS,  I immediately saw the game has its own unique identity. The visuals are vibrant and cartoony, the gameplay is free-flowing with a high skill ceiling, and the characters are mostly all very fun to play. However, NASB has quite a few rough spots that constantly reminded me that this is a budget title — and one that may have put too many of its eggs in one basket, at that.

A key piece of the fighting game experience is seeing cool gameplay moves happen and learning to do said cool moves, and NASB delivers there. While playing, I constantly found myself having “Wow I can do that?!” moments while exploring some of the best mechanics Ludosity implemented into the game.

Similar to the Smash Bros. series, NASB revolves around going to a battlefield with one or more opponents and duking it out to raise their damage percentage in order to launch them offstage in a giant explosion. Where it differs is in the tools players have to complete this goal.

NASB also gives players access to an anime fighter-esque air dash that can be done to zoom through the air or canceled out of a low jump to wavedash (seriously, this is shockingly complex). This has to be my favorite feature in the game, as it gives players freedom of movement when it comes to spacing, combos, mix-ups, defense, and more.

I lost myself in a sea of ideas of what I could be doing in my time playing. The game presents so many great tools to players that offer different ways of playing that what you get is a title with what could be an endless learning pool for player expression.

However, NASB has its rough spots with a few technical oversights here and there including infinite combos and unbalanced moves like Catdog’s overpowered aerial up-smash, lovingly dubbed by the community as the “Updog.” Despite this, the combat really shines, making this an especially fun fighting game. And the amazing rollback netcode usually allows Ethernet-wired players to play with these mechanics to the best of their ability despite being great distances apart.

The game is very bare

While I could go on for days about the combat system in Nickelodeon All-Star Braw ,the same can’t be said about the rest of the game — probably because the combat really is all there is to it. If you’re looking for a one-to-one Smash Bros experience, look elsewhere, because this is not it.

NASB has four modes. The first is battle, a standard offline versus mode where up to four players can duke it out in stock, timed, or sports matches (the latter being a game of knocking a ball into the opponent’s goal). There are also standard training, arcade, and online, which has quick play, competitive play, and online lobbies. Besides that, there’s nothing else to do in the game.

Ironically, for a game based on children’s cartoon characters, there just isn’t much here for that audience.

Yes, the main appeal of a fighting game should be the fighting, but other modes to sink time into for more casual players have been genre staples since the Dreamcast era. NASB seems to have forgotten about that. There’s no survival mode, no unlockables, no minigames, or anything else of the sort.

Ironically, for a game based on children’s cartoon characters, there just isn’t much here for that audience, let alone casual gamers who want to play as their childhood favorites. While there is a ton for the competitive side to chew on, the masses get left with scraps, and that just feels misguided for a game like this. I’m not sure if it was due to budgeting or poor decisions, but I think this game really needs more meat on its bones to stand the test of time with someone other than the hardcore lot.

A masterpiece in need of polish

Nickelodeon All-Star Brawl constantly lets you know that it isn’t a big-budget production. One of the big issues that many people have with the game is the lack of voice acting. It’s hard to accept that a game starring cartoon characters from our childhoods doesn’t feature their iconic voices.

There are also a few battle mechanics that could use more polish: Untechable knockdowns becoming infinite combos, some characters having rough times snapping to stage ledges safely, and certain characters like Patrick simply feeling unfinished.

Ludosity clearly plans to support the game after it launches, which puts it in a position to grow.

Thankfully, during Hungrybox’s Juice Box tournament, one of the developers stated multiple times that these mechanical issues will be resolved. In an interview with Game Informer, Ludosity’s CEO Joel Nyström said voice actors are something that may be added down the line, along with other planned updates for the game. Ludosity clearly plans to support the game after it launches, which puts it in a position to grow.

Nickelodeon All-Star Brawl is a wildly fun time if you’re coming to it for its competitive potential. However, your mileage may vary depending on if you’re a casual or hardcore player. The game will be updated in the future, so more features may be added, but only time. Until then, it’s lacking some key features that hold it back as a casual single-player experience.

It depends on who you are. If you’re a competitive player, you’ll find yourself losing track of time with how much there is to find in NASB. If you’re just in it for the party game or single-player experience, you may want to wait for a price drop.

If you don’t already have it, there’s always Smash Bros. Ultimate and its huge roster of fighters, though its online experience is miles worse than NASB‘s. If you want a super-competitive time with just as high a skill ceiling and as fun movement options as NASB you can play Smash Bros. Melee, which now has online capabilities comparable to NASB thanks to a new rollback client through Slippi.

Yes, though it really depends on what you’re looking for. It’s not a perfect casual experience, but if you’re a hardcore fighting fan that wants to get sweaty online, it’s a must-try. However, beware of purchasing on the Nintendo Switch, as it is the only version without rollback netcode, which makes its online experience significantly inferior to that of the other hardware choices.