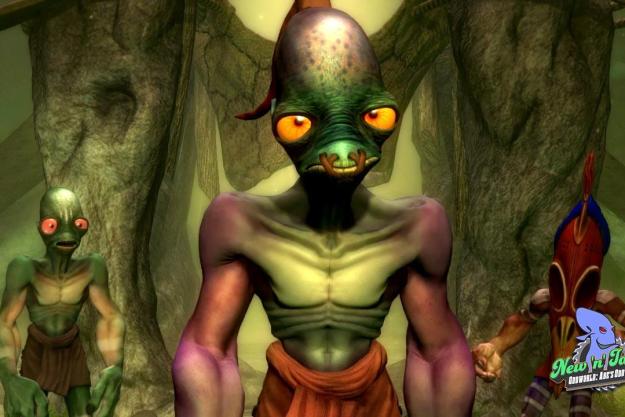 “Oddworld: New ‘N’ Tasty is the rare remake that improves on the original, thanks to fresh ideas mixed with a still-fresh gameplay foundation.”

Oddworld is a disgusting place to the human eye. Riddled with skittering, exoskeletal critters and ravenous, beaked predators, every inch of the place feels forbidding to human life. At no point in Oddworld: New ‘N’ Tasty, a top to bottom remake of the PSone classic Abe’s Odyssey, does it feel like a place you would want to visit, let alone live in. That’s part of its magic.

Oddworld isn’t meant for humans. Mudokons like Abe — himself an ugly fellow by human standards, with bulging amphibious eyes and bulbous hands — are the alien world’s natural inhabitants. New ‘N’ Tasty reveals Oddworld’s environs and its multifarious lifeforms through Abe’s eyes as he experiences them for the first time. Through clever puzzles, sticky platforming, and a story of ecological rebirth, Just Add Water and Oddworld Inhabitants imbue their sometimes grotesquely alien game with lovable life.

At no point in Oddworld: New ‘N’ Tasty does it feel like a place you would want to visit. That’s part of its magic.

The reason Abe has just as little experience in the Oddworld wilds as the player is that he, like many Mudokons and other creatures, was born into slavery. He’s the captive of Rupture Farms, a militarized corporation run by cigar-chomping purple monsters called Glukkons, whose primary business is pumping out pre-packed meat pies and pops.

Business for the Glukkons was good, to the point that it wiped an entire species native to Oddworld, and the game opens when Abe the custodian accidentally witnesses a board meeting introducing Rupture’s new and tasty dish: Mudokons. So horrified that his already oppressed people will be turned into Soylet Mudo, Abe moves to escape past Rupture’s gun-toting Slig guards, meat-chopping grinders, and electric fences while helping as many Mudokons escape as he can.

No small task. Even after 17 years, the basics of Oddworld make it an unusual beast. Abe moves like a clumsy Rayman, trundling through Rupture Farms and the wilds in 2D. He can run, tiptoe to sneak past sleeping guards and monsters, crouch and roll behind cover, jump over small gaps, and hoist up onto nearby ledges. These athletic abilities alone fill Abe with character. He ambles around goofily and can be hard to stop when he gets moving too fast or jumps too close to a steep drop.

His clumsiness doesn’t feel like bad game control; rather, it’s appealingly idiosyncratic. You have to get to know him to use him well, especially in difficult puzzles. Right when you enter the desert of Scrabania, roughly halfway through the game, your path is blocked by Slig guards on multiple cliffs. In order to get past the first one, you need hop up one cliff while a guard’s back is turned, quickly crouch down to activate a landmine, then roll away quietly without alerting him. Pulling moves like these off isn’t easy, but grasping Abe’s cumbersome physicality and nailing those feats bring you even closer to the character and can colon even small moments with accomplishment.

New ‘N’ Tasty is more forgiving of failure on Easy and even Normal difficulty compared to the original, thanks in part to a more durable Abe and the ease of saving your game. Not locked to slow-loading checkpoints, you can quick save the game by tapping the Dualshock 4’s touch pad and load that save by holding it down. Rather than ease the game’s trickiest jumps or puzzles, quick saving just removes frustration and tedium, keeping every challenge potent.

Platforming acrobatics aren’t Abe’s only skills, nor are they the game’s only tools for filling Oddworld with a surprisingly affecting life. When meeting other Mudokons, you can also have Abe say hello, ask for a crowd’s attention, or invite them to follow him all by tapping the controller’s directional buttons. Holding the right trigger transforms these niceties into non-verbal expressions, like whistles and, yes, farts. The non-verbal commands are typically used as passwords memorized or mimicked to get by free Mudokons in the outside world, while the verbal are used when helping the enslaved escape.

Just Abe’s voice does wonders for endearing you to the game. Words pour out sounding like earnest gulps, and when he rouses a gang of torpid Mudokons to head towards an escape portal the temptation to high five your television is very real. Then when you hear him quietly speak in verse describing his spiritual awakening and the ravaged wildlife outside Rupture, it’s easy to get swept up in his plight.

While much of the game is spent overcoming environmental obstacles in places like Scrabania and the forested Paramonia, well more than half your time is spent in the interconnected halls of Rupture and secret rooms trying to save Mudokons. There are 299 of them in captivity, 200 more than in the original game, which adds a whole lot of fresh material even for fans of the original.

Rescues add an entirely different shade to the environmental puzzles. You often have to clear more than one path of danger to get freed captives to escape zones, which appear as little circles of birds that Abe has to chant in front of to open an escape portal. Sometimes it’s as easy as introducing yourself to a Mudokon and having him follow you while carefully hiding from guards in steam clouds. Other times, you’ll find yourself in an enclosed space trying to figure out how to keep a half dozen Mudokons alive while disarming multiple landmines and taking out a gaggle of vicious Sligs.

Of course, you don’t have to save all the Mudokons. Sacrificing a few during an escape to keep others alive or simply missing some along the way are options, leading you to victory but with one of the less ideal endings. Saving more Mudokons rewards you with more than just an improved ending, though. Each one you help out only makes the puzzle solving more stirring, creating more connective tissue between player and game.

Abe’s journey, first discovering the natural world he’s been denied then freeing his people, is powerful because it makes good deeds a tangible part of the game rather than an abstract story element. Two decades back, Abe’s Odyssey was in part defined by its gimmicky technology, full of audio, CG animation, and pre-rendered backgrounds at a time when such things were rare. New ‘N’ Tasty, free of those trendy design tools, lets Abe and his world shine on their own, and they positively glow.

Street Fighter 6 shows off its new style in debut trailer