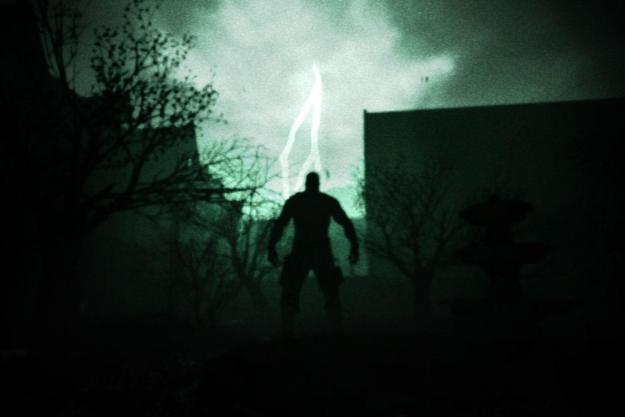 Originally released as a PC exclusive, Outlast made its console debut on the PlayStation 4 in early February. The game brings some much-needed content to the PS4, even though it struggles with it the same limitations that plagued the PC version.

The idea behind Outlast is simple. In fact, the story borders on cliché: You step into the shoes of journalist Miles Upshur as you investigate the Mount Massive Asylum, following a tip that illegal, unethical, and possibly inhuman things are happening behind locked gates. Within minutes you come to realize that Miles has made a terrible mistake, and instead of looking for a story, he desperately seeks an escape.

Unable to put up a fight, Miles is left with two options: run or hide.

Unable to put up a fight, Miles is left with two options: run or hide. His only companion is his video recorder, which is also helps him find his way around in the dark thanks to the night-vision feature. But using it drains the batteries, forcing him to hunt and collect replacements.

The deeper Miles gets into the asylum, the more evidence he finds that something horrible happened, and is still happening. You pick it up in bits and pieces – one patient tells you his story before trying to burn himself to death, while a “doctor” casually fills in some of the gaps as he tortures you. The bulk of the story is told through documents you find lying around though, which paint a picture of human experimentation and supernatural involvement.

The game is less about story than atmosphere (at least until the end when the “big reveal” occurs and things change). Your objectives are simple and the levels are linear. The game does a lot with that narrow view.

As you push through the darkness, you’ll encounter inmates that run the gauntlet from mad to homicidal to sad. Regardless of their attitude, they are all disturbing, broken, and mutilated beings. Navigating a pitch-black hallway full of screaming inmates with only the night vision is nerve-racking, to say the least.

The design of the levels is properly claustrophobic and oppressive, but the sound is what really makes the game work. It isn’t just the cries of people that want to kill you – and in some cases eat you – it’s the music that screeches at you, the creaking boards telling you someone is nearby even though you can’t see them, the booms of a giant inmate named Walker that can rip you apart with his bare hands. If ever there was a game that required a surround-sound system, it is Outlast. Sound is an integral part of the game’s design, and without surround sound you’ll be missing out on important audio cues.

Miles’ inability to fight creates an element of stealth gameplay, during which the game is at its best and worst. Moving through the darkened hallways, trying to quietly sneak past enemies that could slaughter you, can make for some exceedingly tense moments. But the enemies lack variety. They may look different, but they all follow patterns. Once you realize this, there is very little to fear if you’re patient.

If they do see you, that’s when the game is at its best.

There are a few white-knuckle moments when enemies are onto you, forcing you to run for your life, looking for a spot to hide. There aren’t enough of these, though.

Early sections of Outlast are far more memorable than the later ones.

Other opportunities are simply missed. For instance, many survival-horror games employ tricks that you expect, but only see once in a while. At one point you’ll be focused on something ahead of you, then when you turn around there will be enemies right behind you. It’s a predictable trick, but an effective one. This type of trickery is rare in Outlast though. For the most part, what you see is what you get. There is an argument to be made for letting you scare yourself, but once you begin to settle into the cadence of the game, the lack of unpredictability hurts.

Technical limitations sometimes shatter believability. For a crumbling asylum, there is no allowance made for things like rickety boards you should avoid stepping on. Enemies are alerted specifically by sight, with a few scripted exceptions. It really just comes down to the AI not being very bright and unable to expand outside of their predictable patterns. Even the hulking Walker falls victim to this. He can be outrun, lured, and snuck around easily enough.

Because of this, the early sections of Outlast are far more memorable than the later one. There is more to see and the art design is more intricate deeper in, but by the time you make it halfway through the 6- to 8-hour game, you will have seen the majority of the tricks the game has to show you.

Outlast has elements that are genuinely frightening, but they yield to predictability, and predictability leads to tedium. There is more than enough remaining to make survival-horror fans on the PS4 gleefully consume it, plus the PS4 version of the game is the equal of the PC original. The lack of weapons also adds an interesting twist. The scary moments are much less frightening when you realize how it’s really just a matter of patterns.