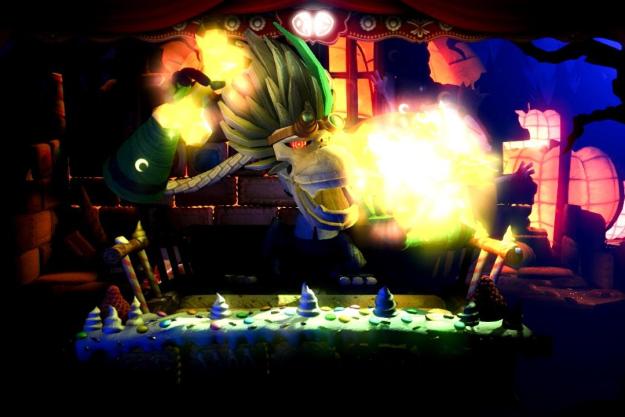 “There’s nothing else out there that’s quite like Puppeteer.”

After playing Puppeteer a handful of times over the past year, I wasn’t sure what to expect from the finished product. At first glance it’s just another platformer. Sure, it has a few unique gimmicks, like the marionette-style presentation, the magical scissors the hero uses, and the replaceable heads he wears, but you are still running and jumping over obstacles just like any platformer. It turns out I was very wrong. Puppeteer is so much more than just a standard platformer.

SCE Japan created a game that is completely unique, even if it relies on well established gameplay conventions. That presentation starts by framing the screen with theater curtain borders and goes on to the character and environmental design, but that is just what you see. The brilliance of the game is what it represents.

Puppeteer is an examination of modern fables in popular culture. It’s a fairy tale that is both instantly familiar and completely original. From battling pirates, to fighting a mad scientist in a Halloween-themed world, to surviving a magician’s traps as you jump from one playing card to the next, the game taps deeply into modern conventions of fantasy and adventure. And it does so with a charm and grace that makes you overlook many of its shortcomings. The whole thing blends together to create a game unlike any other.

A boy and his heads

The story and presentation of Puppeteer are inexorably linked in ways few other games are. The story isn’t just what happens between segments of gameplay, it is constantly evolving as you engage with the game.

The brilliance of the game is what it represents.

As mentioned, the game is framed by a curtain throughout the entire playthrough. This limits your viewing area, but it becomes an important part of the presentation as you become the star of the show.

You play as Kutaro, a child whose soul was captured and brought to the moon to serve the tyrannical Moon Bear King. The story is presented as a marionette puppet show, which makes the Moon Bear King’s means of subjugation – tearing the head off of children and eating them – less horrific than it sounds. It’s more of a plot device as you quest to retrieve Kutaro’s head.

With the help of the scheming Moon Witch, Kutaro commandeers a replacement head and steals the magical scissors Calibrus, a powerful weapon in this world built out of fabric. Along with a companion – first a ghost cat and then a princess of the sun named Pikarina – Kutaro is tasked with collecting Moon Shards, powerful fragments that once belonged to the true ruler of the moon. The fairy tale story hits all the right notes, with an evil king and a noble hero on a quest to defeat the tyrant.

Through seven acts, each containing three “curtains” (or stages), Kutaro encounters enemies and environments styled like a marionette stage show. Castles spin in place to signify that you are climbing them while the background stays static, wooden monsters chase you, and hanging cloth becomes an avenue of travel as you use Calibrus to cut your way to new areas. As you move from one section to another, a scene change occurs; the various pieces that make up the environment pick themselves up and are replaced from “off stage” with new pieces, forming a new area.

All of this happens as an unseen audience applauds, cheers, and gasps through Kutaro’s journeys. Throughout it all, Kutaro himself remains silent, though the ever-present and omniscient narrator rarely is, and neither is your companion. In fact the two frequently break the fourth wall and talk to each other, occasionally hinting at the nature of their reality as a theater. Pikarina, who you spend most of the game with, can be abrasive at times, but the narrator’s commentary is filled with some laugh out loud moments through witty, and often dry descriptions of events.

While the story is often funny and endearing, it can quickly become cumbersome. The cutscenes – all done in-game with the same marionette style – appear at any time, and they usually force you to either skip them entirely or just put the controller down and wait until the play starts again. It’s one thing to have a decent chunk of story now and then, but Puppeteer approaches Metal Gear Solid levels of “just let me play the damn game” exposition. You’ll often spend several minutes at a time just waiting to play as the story takes over. There’s a full song and dance number at one point that is equal parts cute and frustrating. Even when they are engrossing, the number and length of the cutscenes creates a pacing issue with the game.

While the general plot is as old as storytelling, the way it’s told is a fusion of old and new concepts. Fans of Neil Gaiman will see some parallels in his allusion rich works, as gods and mystics battle with modern concepts, and fairy tales are bent and twisted in new ways. Both Terry Gilliam and Tim Burton are heavy influences; and The Adventures of Baron Munchausen come to mind. There is an entire section modeled closely on both the design and art of Nightmare Before Christmas, while Gilliam’s Adventures of Baron Munchausen’s tall tales would make a good companion piece to Kutaro’s adventures.

Every time you think the game has peaked, it surprises you.

The moon in Puppeteer is a dream reflection of the Earth rather than the desolate lunar rock in our orbit. It teems with life, and the various Acts all represent familiar and heavily romanticized adventure settings. You’ll travel through forbidden forests with living trees, deserts littered with pyramids, and a Halloween-themed area complete with graveyards and mad scientists.

That same Halloween area also has an area made entirely of candy – Puppeteer never takes itself too seriously. You’ll never know exactly what’s coming next.

While the tone and settings are steeped with originality, the gameplay is a bit more familiar, although it does have a few unique tricks.

Kutaro can carry up to three heads with him at any time. These heads are randomly dropped from floating cauldrons, or they are awarded for completing objectives like defeating a boss or freeing another trapped boy. Each offers a unique animation for fun, but it’s purely cosmetic. Sometimes an icon of a specific head will appear in the environment, and if you have that head you can earn a bonus – either “moon sparkles” (like coins in a Mario game) or access to the in-progress Curtain’s bonus area. These heads can often be from much early Curtains, or even Acts, so it’s rare that you’ll have the correct head on you by chance though, so these are best handled on a subsequent playthrough. Beyond that, the heads are really just representative of Kutaro’s health.

When he is hit, whatever head he is wearing pops off. You have a few seconds to grab it before it rolls away or disappears; lose it, and the next head queued up appears on your shoulder. When all three heads are gone, you are dead, but that isn’t a problem. You gain a new head – really, an extra life – when you collect 100 moon sparkles, and that’s an easy thing to do. You can easily have 20-30 extra lives or more at any point throughout the game.

Another unique feature is the ability to control your companion with the right thumbstick, though it’s somewhat underutilized. The companion can only interact with specific things in an area, usually objects in the background. They are useless in a fight, but they can help to solve the odd puzzle. You might use them to open a certain window to free someone, or replay a series sounds in a specific order. It adds an extra layer, but not a vital one. You can ignore your companion for all but a few moments and still easily progress through the game.

In most regards, Puppeteer is a standard 2D scroller. You run, you jump, you try not to fall in a big hole and die. The big difference is the scissors, which allow you to cut fabric. This can be used offensively against bosses who expose their clothy undersides when wounded, but more often you use the scissors to travel. When Kutaro encounters a cloth or paper area, he can cut into it. If you time it correctly, you can keep cutting in any direction as long as the fabric holds. It really just comes down to timing. That leads to some cheap deaths, however.

Cheap deaths are a frequent annoyance. The screen can’t always keep up. You may miss a jump you didn’t know was coming, or find the platform you’re on suddenly flip over without warning. Often the only recourse is repetition and memorization. That’s common in platformers, but it’s still when the rest of the level flows fairly well and suddenly you die because you can’t see where you’re going.

Boss fights also tend to start strong and then fall into repetitive patterns. Some of these fights are flat out epic. You battle enemies the size of buildings and others that are the entire level. But then once you get to the actual fight, it is a matter of learning the attack pattern, wounding them in a specific way three times, and then waiting for a quick time event. The gameplay is still entertaining, but it just doesn’t match the originality of the game itself.

There isn’t anything out there quite like Puppeteer. Every time you think the game has peaked, it surprises you with a new take on an old subject, and it remains consistently charming throughout. There are a few issues, and the gameplay doesn’t match the rest of the originality of the concept and presentation, but there is enough to keep you invested throughout. I can’t honestly say that Puppeteer is the best game of the year so far, but it may be my favorite.