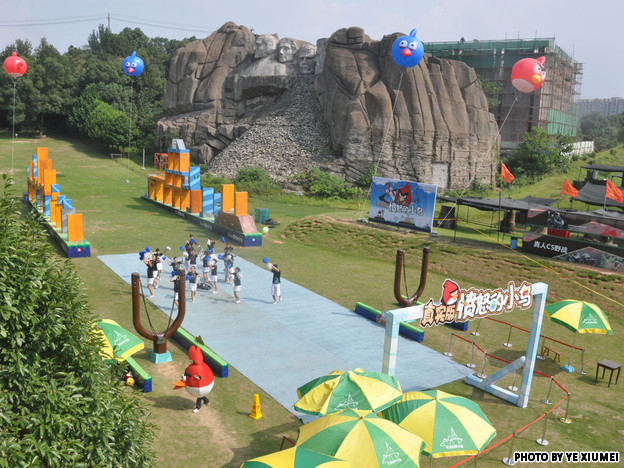 If you don’t own a computer or smartphone but desperately want to play Angry Birds, there is now a solution – move to China.

A theme park in the city Changsha, Hunan province, has recently opened a real-life Angry Birds attraction. For this version, however, you need to do more than just swipe your fingers – physical strength is required.

The theme park’s bird-based attraction involves pulling back a real slingshot, enabling you to fire toy Angry Birds as big as your head toward those pesky pigs. And yes, they’re on a brick fortress that you can actually knock down, just like in the smartphone version of the ubiquitous game.

The new attraction can be found at the Window of the World theme park and was introduced as part of a month-long stress-reducing festival. The Angry Birds attraction is scheduled to be taken down at the end of this month, but it’s proving so popular that the park’s management are considering making it a permanent fixture – despite having no licensing rights from the makers of the original game, Rovio.

You might imagine that most companies, upon hearing about such a situation, would send the lawyers in to close it down. This doesn’t appear to be the case with Rovio.

Not one to ignore a marketing opportunity, the Finland-based game maker has reportedly opened negotiations with the theme park about the possibility of forming a long-term partnership.

Rovio is known to have big plans for the Asian country. Back in April, Rovio CEO Peter Vesterbacka spoke of “setting up a local operation [in China] and investing a lot into creating special versions of Angry Birds” for Chinese users. It also has plans to sell Angry Birds merchandise in 200 retail stores across the country.

Xbox September update introduces game library revamp and more
Logitech made its own lightweight handheld built for cloud gaming
How to link Fortnite accounts
What is ray tracing, and how will it change games?
Splatoon 3: how to play with friends
Exoprimal: release date, trailers, gameplay, and more
‘Wordle’ today, September 21: Answer, hints, and help for word of the day (#459)
Call of Duty: Modern Warfare II beta has some serious pacing issues
Aliens Dark Descent: release date, trailers, gameplay, and more
The best Nintendo Switch shooter games
Scorn will make your stomach churn and your brain hurt
Devs show what in-development games look like after GTA 6 leak
Fortnite Chapter 3 guide: All week 0 quests and how to complete them