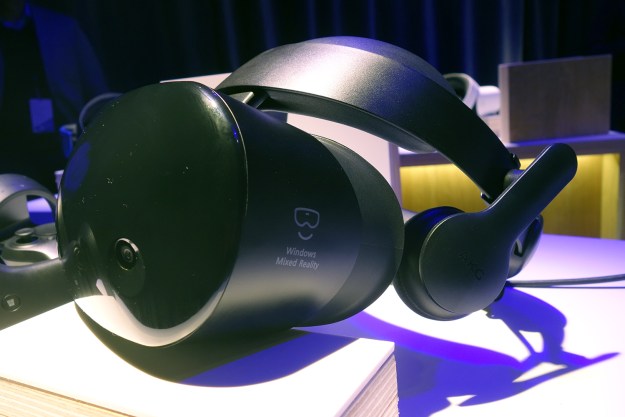 Windows Mixed Reality will support five different headsets at launch, which puts would-be buyers into a familiar pickle for any Microsoft fan: Which device should you buy when they all seem more or less the same?

Samsung offered an easy solution on October 3 when it introduced the Odyssey: Just spend an extra $50 and get the good one.

Better in every way

The first Mixed Reality headsets Microsoft announced ranged between $350 and $450, and each one boasted the same 1,440 x 1,440 resolution in each eye, and 95-degree field of Vision. Essentially, you’re choosing between a Pontiac Grand Am, an Oldsmobile Alero, and a Chevy Malibu, which is to say: multiple rebadged versions of the same painfully average thing. Sure, the Dell comes in white and the Lenovo in black, but beneath the hood, the same engine’s humming.

You’re really more of a sucker not to get it.

Samsung just pulled a Cadillac with the Odyssey. At $500, it’s undeniably more expensive than any of its peers, but the negligible premium buys you so many important upgrades that you’re really more of a sucker not to get it.

What kind of upgrades? Let’s start with the 1,440 x 1,600 resolution OLED screens. They have more pixels than the competition, and they’re OLED instead of LCD, which means blacker blacks, more vibrant color, and in our experience, silkier motion. Tiny boosts in resolution may be moot point on a 5-inch phone screen these days, where we’re reaching the limits of human perception, but spread across your entire field of view, more pixels matter. First-gen VR headsets like the Oculus Rift and HTC Vive still produce a visible “screen door effect,” and every extra line of pixels makes it less severe.

The Odyssey also has a physical knob to adjust for the difference between your pupils. Yes, the others are “one size fits all” units that only attempt to compensate for differences in human anatomy with software. Only the Samsung allows you to manually adjust the differences between the eye pieces with an easy-to-use knob that you turn until images look their sharpest, like at the eye doctor. It also boasts a 110-degree field of view, which bests the 95 degrees offered by nearly every other competitor — the Acer headset also features a 110-degree field of view.

In practice, the Samsung not only looked sharper than its peers, it produced less of the noticeable haze that appears around bright spots in your peripheral vision in VR goggles, and felt more fluid as we looked around. Maybe that’s the OLED screens. Maybe it’s the 110-degree field of vision. Maybe it’s the manual adjustment. We’re not optical engineers, but we can say without hesitation that Samsung’s headset looks better than any of its peers, particularly when viewing the type of detailed content (like text) that you’re liable to view in Windows Mixed Reality.

As if you needed any icing on the VR cake, the Odyssey comes with built-in AKG headphones. These seem like a small detail, particularly if you already own headphones you like, but the convenience of having them built into the headset is greater than you may anticipate. Putting headphones on top of a VR headset means carefully assembling and disrobing a VR ensemble every time you take them on and off. There’s an order of operations to remember, like taking your shoes off before your pants. With the headphones built in, you just take the entire thing on and off. One movement. Nothing to remember.

In case you haven’t picked up on our advice by now: Samsung’s Odyssey is the Mixed Reality HMD to own. Not only does it best its peers, it may even rival the best-in-class HTC Vive.

We’re not ready to definitely declare that until we have both in-office for review, but in the meantime, we’ll point out that the Samsung has better resolution, doesn’t require tracking towers, and it’s $100 cheaper, even after recent Vive price cuts.