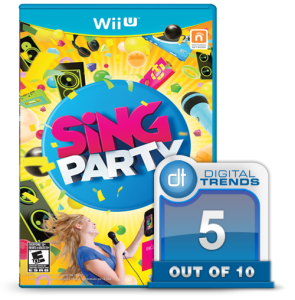 Karaoke games are nothing new. They’ve been popping up in various forms ever since consoles gained microphone accessories, so seeing one on the Wii U during its launch window is no real surprise.

But with a karaoke game you expect a certain level of quality from the outset. The mechanic doesn’t require a heavy development cycle, so once that is locked down, developers can go to work on fleshing out everything else. Create a solid vocal offering and then you can pour content on it, add new game modes, bulk up the song selection, design new ways for people to get involved. Sing Party does none of that.

The game comes complete with a USB-powered microphone (or it can be purchased separately) that pushes your voice onto the TV. It isn’t an especially high-quality mic, but it does the job. The game features 50 songs, ranging in artistic style from Fleetwood Mac to Lady Gaga. It’s a fairly small selection for a game built around audio tracks, but it does give a decent variety of artists and styles. Plus you can be sure that there is plenty of DLC on the way.

Sing Mode is the primary single-player option (although duets are possible), and it offers to judge you based on pitch, power, and flair. As you sing there is a bar that gives you a rough idea of where you should be when that lyric kicks in. The closer you are to the original artist, the better your score will be. Of course, you can always ignore this and just howl the lyrics out, you just won’t earn points. This somewhat limits the karaoke aspect of this mode and turns it into how well you can imitate the original artist. That isn’t a problem that’s unique to Sing Party, but it limits what you can do. The power is just how loud you sing, while flair judges how many tone changes you try and how much your voice changes. Once you are done, you receive your score, which is the only measure of completion. There is no progression, just you trying to beat scores. If others want to join in and play, they can use Wii Remotes to acts as maracas, although this amounts to about the same thing as clapping at a concert and therefore assuming that you’re in the band.

During this mode you (or more likely another person) can make a few changes on the GamePad, including changing the audio levels and creating a playlist. This is really the only concession to the GamePad, which is a shame. With just a bit more work, the Wii U’s new signature controller could have turned this game into an original and impressive music editor, even with just 50 generic songs. As it is, it barely qualifies as a karaoke game.

Throughout the game, the GamePad integration is a constant issue. If this were a deeper title with several modes and more tracks than you can count, that could be forgiven, but it is shallow and light on content, and the one thing that really should give it an edge among its rivals is hardly used.

If there is one saving grace to Sing Party, it is the Team Mode, which is a multiplayer option designed for a party setting, pairing two groups against each other in three scored, competitive karaoke events: solo, choir, and a relay event. You can choose your own song, but you can also have the other team select for you, which is far more entertaining. You can choose how many rounds you want to compete, and at the end the scores are tallied and a winner is chosen. It’s a fun mode if you want it to be, but you’ll have to work for it.

And then there’s the Party Mode. This is basically just a music video you watch while reading the lyrics on the GamePad. It suggests that others dance along using the Wii Remote to track their movement, but it doesn’t really register how you are doing, offer a score, or really seem to care if you are even in the room. There aren’t even options to turn off the track’s lyrics, which make this a difficult sell as a pure karaoke mode.

Sing Party is marred by squandered potential. The Wii U GamePad is ripe for a karaoke game in several ways, yet none of them are utilized here. Even putting aside the things that could be but aren’t, and judging the game solely based on the content, it still comes up very light.

There are a few glimpses of decency though. The Team Mode could be fun for parties, and the Solo Mode is what you would expect (if no more). The song selection isn’t all that intriguing or deep, but it is varied. If you are beside yourself in desperation for a karaoke game, and are OK with what feels like the skeleton of what could have been a great karaoke title, then Sing Party is your game.