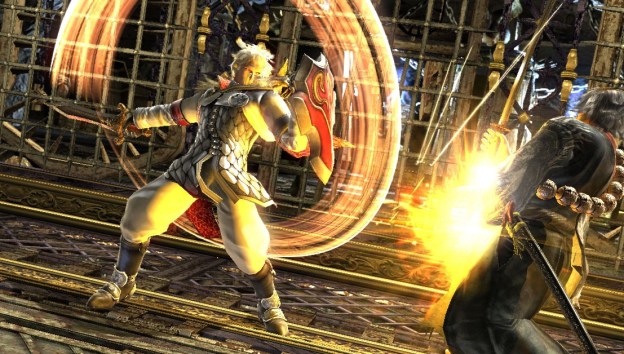 Earlier today we got a look at the new trailer for the upcoming mega-crossover Street Fighter x Tekken, but that wasn’t the only popular fighting game to get a new teaser ahead of this week’s Gamescom convention in Germany.

Namco Bandai offered up yet another peek at SoulCalibur V the next installment of its popular weapon-based combat game. Set 17 years after the last game (SoulCalibur IV, of course), the upcoming title features the debut of at least two new characters, Patroklos and Pyrrha, the children of sword-and-shield-wielding SoulCalibur regular Sophitia.

The new trailer offers up a bit more information about who’s returning for the next chapter of the franchise, though there probably aren’t any surprises for SoulCalibur fans. As always, Voldo seems to have undergone a creepy redesign, and we also get to see a few of the explosive new attacks certain characters will wield.

The end of the trailer offers up a nice look at Patroklos, too — who, along with his sister, probably won’t be the only new characters to debut in the game.

SoulCalibur V is scheduled for a 2012 release on the Playstation 3 and Xbox 360.

Everything we know about AEW: Fight Forever: release date, trailers, platforms, and gameplay
Alone in the Dark: release date, trailers, gameplay, and more
These are the 10 best games we played at Gamescom 2022
Wo Long: Fallen Dynasty: release date, trailers, gameplay, and more
How to Super Jump in Splatoon 3
How to trade in Temtem
Rockstar Games hacker reportedly arrested following GTA 6 leak
Xbox is inspiring Black youth to make games with Project Amplify
Destiny 2: Where is Xur for the weekend of September 23
Hellblade developer Ninja Theory confirms it won’t replace voice actors with AI
Hurry! This Alienware gaming laptop deal cuts over $1,000 off the price
Best gaming PC deals: Get a new desktop rig from $530 today
Best Alienware deals for September 2022