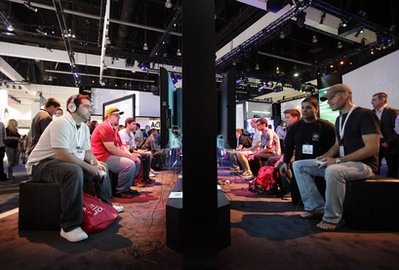 There might be something for everyone at this year’s Electronic Entertainment Expo.

Once a boisterous bastion for geeky gamers, the gaming industry’s annual convention has in recent years morphed into a more modest showcase of the latest in hardware and games from publishers and developers who now want to reach consumers of all kinds — not just guys. This year’s E3 is likely to mimic last year’s shift to a cautiously glitzy affair.

Nearly 250 exhibitors, including publishing giants Microsoft, Sony and Nintendo, plan to hype their latest games and gizmos. The Entertainment Software Association expects 45,000 attendees this week, which would be 4,000 more folks than last year. That’s still shy of the massive crowd of 70,000 who flocked to the Los Angeles Convention Center back in 2005.

“I think there will be a couple of surprises and a couple of expected things,” said Greg Zeschuk, co-founder at Electronic Arts’ BioWare. “Obviously, the thing that Sony and Microsoft are going for is to broaden their reach with consumers. It’ll be interesting to get hands on and see what kind of products they’ll have that use the motion controls.”

Microsoft and Sony unveiled their respective motion-control doodads at last year’s E3 and will focus their attention at this year’s show on games that use the camera-based systems. Nintendo, who launched motion control into the mainstream in 2006 with the Wii, will meanwhile flaunt their pulse-detecting Wii Vitality Sensor and the 3DS, a 3-D handheld device.

In anticipation of the expo, which has events beginning Sunday but officially kicks off Tuesday, Sony lunged into 3-D gaming last week by releasing three downloadable 3-D games for the PlayStation 3. The publisher plans to demonstrate 3-D versions of bigger games at E3, such as “Killzone 3” and “Gran Turismo 5.” Other game makers will also exhibit 3-D titles that require a 3-D TV or computer.

Besides motion control and 3-D gaming, many attendees will no doubt be buzzing about what effect mobile and cheap-to-produce-and-play online games, such as “FarmVille” and “Mafia Wars,” will have on the industry, though such titles won’t have a major presence at the convention. Developers of bigger games are now paying attention to the popular little guys.

“I see it as quite an interesting challenge,” said Jamie Jackson, creative director at Activision’s FreeStyleGames. “It feels to me it’s the start of a new type of gaming. It feels like it’s going to be here to stay. It doesn’t feel like it’s going to go away. It almost reminds me of when handheld blew up again, and we started seeing the DS and the PSP.”

Jackson will be showing off “DJ Hero II” at E3. The music game boasts new modes and songs featuring Lady Gaga and Rihanna. In a sign that the genre isn’t played out, game makers will add the adventurous “Guitar Hero: Legends of Rock,” hip-hop rap-along “Def Jam Rapstar” and “Rock Band 3,” which introduces a piano controller, to the E3 mix.

More importantly, the convention will serve as an opportunity for people in the gaming industry to see what their peers have been working on. Josh Olin, community manager for “Call of Duty: Black Ops” developer Treyarch, is looking forward to experiencing “Gears of War III,” the third installment of Epic Games’ bloody third-person shooter series.

“I’m a big ‘Gears of War’ fan,” said Olin. “They have always told a great story, and they have a great narrative. Personally, I’m a single-player guy. I really live for good action stories. With ‘Black Ops,’ of course, we’re telling a pretty good story this time, so that makes me happy, but ‘Gears of War III’ is another big one I’m looking for at E3.”

There will probably be surprises of new sequels, too. Games rumored to be making their debut at E3 include a next-generation edition of the James Bond first-person shooter “GoldenEye 007,” a new “Legend of Zelda” title for the Wii and possible third chapters of the alternate history first-person saga “Resistance” and action-adventure series “Uncharted.”

Make sure to check out Digitaltrends.com/E3 for this years show coverage.

Also check out our best games of 2010 story

The best games of September 2022: The Last of Us, Splatoon 3, and more
The best Xbox Series X games for 2022
The best PS5 exclusives
Razer’s 5G-enabled handheld gaming system is getting a public release
Fortnite Chapter 3, Season 4 guide: All week 2 quests and how to complete them
All Fortnite Chapter 3, Season 4 quests
PlayStation Stars program awards high-tier members priority customer service
Google Stadia shutting down in January and users are getting full refunds
The best games for Steam Deck
Save over $1,000 off a new gaming PC with this Alienware clearance sale
Best gaming laptop deals for October 2022
Pokémon Scarlet and Violet: all confirmed Pokémon
‘Wordle’ today, September 30: Answer, hints, and help for word of the day (#468)