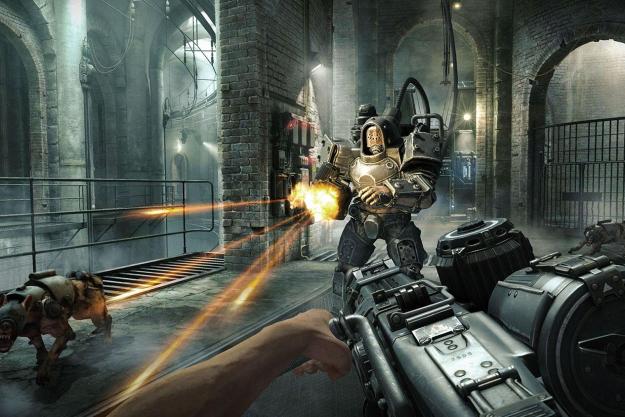 “A solid shooter standing atop fan service and nostalgia”

Despite being billed as a standalone prequel to 2014’s Wolfenstein: The New Order, it’s hard to view Machine Games’ Wolfenstein: The Old Blood as anything other than a game deeply nested within the context of other Wolfenstein titles. Its main menu hearkens back to the cover for 1992’s Wolfenstein 3D. Level design brings to mind 2001’s Return to Castle Wolfenstein. The plot and color palettes are reminiscent of 2009’s Wolfenstein.

In other words, this is fan service, and those who’ve been with the series longer will almost certainly enjoy The Old Blood more than those who haven’t. That doesn’t mean this homage can’t stand on its own though; just don’t expect any surprises, pleasant or otherwise. In The Old Blood, what you see is what you get, and what you get is a whole lot of Nazi-killing.

I’d call that a fair trade.

Unfortunately, there is one area where The Old Blood calls to mind another Wolfenstein game, but falls short: 2014’s The New Order. Where The New Order was surprisingly deep and human in its portrayal of your comrades, The Old Blood doesn’t give you much time to get to know the few non-combatants you’ll come in contact with.

The game wants its dual-wielding-shotguns cake and its war-is-hell pie, too.

This would be fine if The Old Blood had 100-percent committed to being a big, dumb Nazi shoot-em-up smorgasbord, but the game wants its dual-wielding-shotguns cake and its war-is-hell pie, too.

It’s distracting, if not downright, unintentionally hilarious, to hear Blazcowicz’s thoughts during missions. Before entering a German pub full of soldiers, he solemnly remarks to himself about earning his first dollar, and spending it on candy. Uh–cool story, bro?

There are NPCs to meet and interact with, but they’re never as well-developed as The New Order’s cast. Without said well-rounded NPCs around to complement his gibberish, Blazcowicz’s monologuing comes across as overstuffed, overwritten, and detached. The mood of the action simply doesn’t line up with his commentary.

Thankfully, the rest of The Old Blood is up to snuff. Gunplay is loud, fast and satisfying, and the loop of “kill enemies, dance across their corpses to pick up stuff so you can kill more enemies, repeat” is as fun as it ever was in ye olden days of first-person shooters. Multi-tiered, open areas that allow for varying approaches–both stealthy and aggressive–keep things from feeling too linear. A variety of enemy types will keep you on your toes, forcing you to adjust your tactics on the fly.

Should you get bored of the roughly five-hour story, there are plenty of secret areas to uncover, some of which will even transport Blazcowicz into a level straight out of Wolfenstein 3D, pixelated sprites and all. There’s also an arcade-like mode which transforms levels into self-contained shooting arenas, challenging you to score as many points as possible. It’s a lot of content packed into a nice little package, even if the main experience is smaller and more streamlined than its predecessor.

This game was reviewed on PlayStation 4 with a copy provided by the publisher.