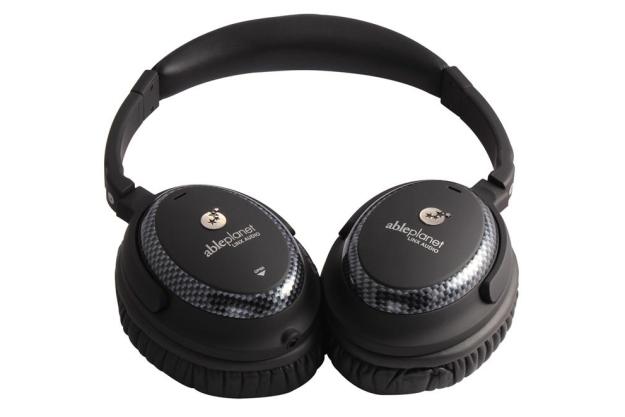 Able Planet audio has taken on the ambitious mission to help people hear better. To accomplish this goal, the company has developed a long list of patented Digital Sound Processing (DSP) technologies which it employs in everything from hearing aids to gaming headsets. And it must be doing something right, as it boasts an armful of CES Innovation Awards for its efforts.

The light plastic that makes up the majority of the frame lacks solidity, and the faux leather padding doesn’t provide a luxury experience.

Aside from all that bling, our interest in Able Planet was piqued by its vast collection of active noise-canceling headphones. The company seems to make a pair for every budget, peaking with its $350 flagship model, The Clear Harmony NC1050. The Clear Harmony offers a broad range of features, including two different versions of the aforementioned DSP. And to sweeten the deal, Able Planet will even throw in a 16GB iPod Touch with each purchase.

Still, many of us have…you know…smartphones for that kind of thing. And at $350, the Clear Harmony sits in some mighty company in the noise-canceling world, priced well above many solid offerings. We had to wonder, could the NC1050 dim the din that well? Here’s what we found.

De-boxing the Clear Harmony was a bit like opening a Russian nesting doll. Within the first box was another box, which opened to reveal yet another box, this one a hard-shell vinyl traveling case. Inside the case, we found the all-black headphones with carbon-fiber accents – a look we find strikingly similar to Phiaton’s MS400. As we removed them, our initial impression was that they were surprisingly light – almost too light. Inside the case we also found a removable headphone cable with a volume control, ¼-inch and airplane adapters, and a pair of AAA batteries.

We have to give props to Able Planet here for designing a carrying case that not only has enough room to house the headphones, but includes molded pieces so there is absolutely no question about how the NC1020 should fit in – a rare find for some odd reason.

Our first impression of the NC1050 was that the build quality has a budget feel to it. The light plastic that makes up the majority of the frame lacks solidity, and the faux leather padding doesn’t provide a luxury experience. After a thorough kick of the tires, we were left hoping the lion’s share of the cost went to including quality components under the hood.

The NC1050’s rotatable ear cups have thin plastic plates on the exterior, slotted at the top for small noise-cancelation microphones. The plate on the left ear cup pops off for access to the batteries, giving a closer look at where ambient sound is drawn into the system. Also on the left ear cup is a power switch to fire up the noise cancellation, as well as an input port for the removable headphone cable. Unlike some active noise-canceling headsets, the Clear Harmony will play without power, but we doubt you’ll want to – the sound is very muddled. As with most noise-cancelers, there’s no auto shut-off, so keeping track of the green LED power indicator will be important for long trips.

On the interior of each ear cup is a thick band of padding encircling a 40mm dynamic driver, each subject to Able Planet’s Lynx-branded DSP technology.

The removable cable is approximately four feet in length, and includes a small plastic volume control about a foot and a half below the ear cup. Like most of the components, the cable has a budget feel to it, and it tended to get tangled often.

The Clear Harmony’s thick padding and easy size adjustment make the headset a comfortable wear, arousing no major complaints after a few hours of listening.

The NC1020 did well at reducing low, droning ambient noise. The hum of our antique-status refrigerator was relegated to a thin whisper in the midrange, though we heard a fair amount of additional white noise. We’ve experienced more convincing cancelation tech, but the NC1020 did an adequate job.

The NC1020’s sound signature is unique – though that may be an understatement. The headphones is designed for all hearing levels, including the hearing impaired. As such, Able Planet has made major adjustments throughout the sound spectrum, resulting in a highly sculpted sound that is about as far from what audiophiles would call “linear” as we’ve encountered. While that’s not necessarily a bad thing, it can change the way you hear your favorite music significantly. Many tracks we tested were displayed with ample detail, but the headset was fraught with inconsistencies, and laid an overlying artificial texture on almost everything it touched.

We began our testing with some of our favorite acoustic tracks. The Clear Harmony rendered stringed instruments like guitar and mandolin with a dainty, metallic ring that was brilliantly clear. Upright bass was warm and powerful, if not a bit heavy at times. Transients – string clicks for instance – were impressively tactile and present. But as we expanded our listening to other genres, we became aware of a bright, synthetic sheen in the upper midrange that get pretty aggressive. The effect was especially evident in crash cymbals and hi-hat on our more sizzle-y recordings. Cymbals had a strident shimmer that was extremely tinny on the front end, and never quite finished sustaining.

Though the Clear Harmony was adept at bringing instruments close and flooding the atmosphere with crisp sound, there was a constant lack of natural space in the music. Snare drums and toms often had a flat, smashed quality, and effects like reverb and phase shifting seemed to be reduced of their full breadth, as if in a vacuum. The effect gave even the clearest vocals a bit of a flat, buried texture that had us leaning in closer for a more live presence.

As we meandered through our rock and pop test tracks, we also became aware of a strange dichotomy in the frequency balance. The light, shiny midrange was occasionally interrupted by thunderously low tones that would creep into kick drums and bass lines. Still, we were unprepared for the beast that would be unleashed in the lower realm with more potent selections. Turning to hip-hop and heavier electronic music, the very deepest frequencies were incredibly powerful, bellowing throngs of rushing force below the 100 Hz line. We admit, the big boom could be fun at times, but it was a bit much. And it was also odd to hear a thudding 60Hz kick drum groove on a Coldplay tune.

Able Planet’s radically liberal approach to DSP with the Clear Harmony NC1020 seems to create more problems than solutions. We enjoyed the headphone’s affinity for detail, but its bright mids, pounding bass, and Kodachrome color treatment of the music were simply too much for our taste. Those looking for a more natural sound in the noise cancellation ether would do well to check out the Audio-Technica ATH-ANC9 instead, which are almost half the price, and perform brilliantly. We appreciate Able Planet’s attempts to equate the perfect sound for all listeners with the Clear Harmony, but for us, the math just didn’t add up.