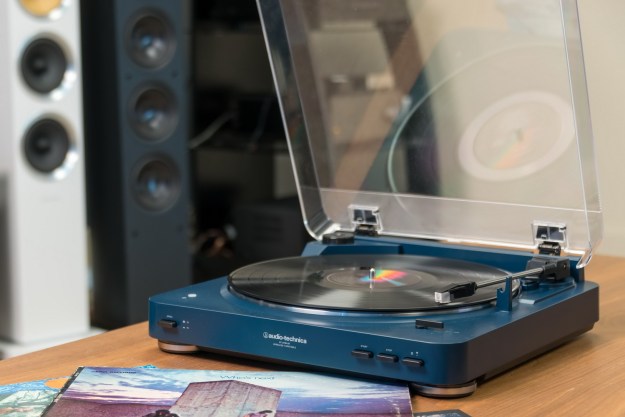 “The LP60-BT is a fine buy if you need to take vinyl playback wireless, but we found the feature more novelty than anything else.”

In a music world which increasingly relies on streaming services and devices with no headphone jack, the proliferation of Bluetooth in audio is becoming bigger by the minute. Virtually every form of audio device —  from speakers to headphones and home stereo amps — offers some form of Bluetooth for cord-cutters, and the push for fully wireless earbuds is now stronger than ever.

Now Bluetooth has come to vinyl via Audio-Technica’s LP60-BT. A $150 variant of Audio Technica’s sub-$100 LP-60 turntable, the LP60-BT allows listeners to re-hash their glorious analog signal into a digital one that can stream wirelessly to headphones or speakers, directly from the table itself.

But even in a world determined to remove wires at all costs, we have to wonder what the market for the LP60-BT really is. Bluetooth adapters for non-wireless turntables and amplifiers are relatively cheap, and besides, why would you want that beautiful analog signal to be made wireless after you spent all that extra cash on wax in the first place?

Such is the crux of our issue with the LP60-BT: It’s a solution to a problem we’re not sure anyone really has, and it makes an extremely basic turntable much more expensive than it should be.

The Audio-Technica LP60-BT comes about as simply packaged as any new device can, greeting you for the first time from a white cardboard box, which opens to reveal a foam-packaged plinth, with the platter, belt, and slip mat separately wrapped atop it.

The plastic dust cover comes attached to the base, but does need to be snapped in place. A 3.5mm to RCA cable is there too, for those looking to use the wired connection.  Also in the box is an instruction booklet, which is large and easy to read.

Setup for the LP60-BT is about as simple as it comes. The platter, belt, and slip mat need to be attached to the deck upon arrival, which is easily accomplished by reading the included assembly instructions (or by anyone who has ever set up a belt-driven turntable before).

Like it’s cheaper, non-Bluetooth brother, the LP60-BT has no counterweight to speak of, meaning that stylus setup is as easy as removing a plastic needle cover.

If you’re not using the Bluetooth for playback, all you have to do is plug the turntable into the wall and the 3.5mm to RCA cable into an amp or phono pre-amp. The LP-60BT has a built in phono-pre for those without one (presumably most who are purchasing a table at this price point), and choosing whether one wants to use it or not is as simple as flicking a switch on the back of the table.

We weren’t surprised to find a decent, albeit very basic, turntable at the core of the LP60-BT.

Bluetooth syncing is relatively simple too. You hold down the wireless function button on the left side of the base for 4 seconds and then let go, at which point the light in the button starts blinking red and blue, indicating it is ready to pair. Once blinking, you simply put whatever listening device you desire (headphones, speakers, amp, etc) into pairing mode, and the two will join in musical matrimony.

While we didn’t have any issues with the pairing process in home testing, we did have some problems with pairing in our listening room, likely due to the extremely high volume of Bluetooth devices in close proximity to the LP60-BT in our office. Those with multiple Bluetooth playback devices might find a bit of frustration, as when the table automatically pairs to something nearby, a lack of a screen makes it impossible to tell what it has paired to.

To the untrained eye, the LP60-BT looks virtually identical to its non-wireless counterpart. A rounded square table — in our case in “special edition” dark blue — with a clear plastic dust cover over the top, the design is clearly meant to fit in with the rest of one’s stereo rack.

Build quality is extremely light, as expected out of an ultra-beginner turntable like this one, with the body made of a medium thickness plastic rather than the heavier materials sported by higher-end tables.

There are four rounded rectangular buttons that stick out from the front of the LP60-BT. On the far left is a choice between 33 and 45 RPM, and on the right are start, stop, and needle raise/lower buttons.

Except for choosing the size of the record to be played (the table has a switch on the top of the base where one can pick between 12” and 7” records for 33 and 45 RPM playback) and connectivity button for pairing, all playback can be done with the dust cover down once a record has been put on the platter.

Playback is automatic, meaning that once a record’s size/speed selected, all one has to do is press “start” and the tone arm will raise from its resting place, move to the edge of the vinyl, and slowly descend. When a side finishes, or if the “stop” button is pressed, the tone arm will raise and return to its home position. This is particularly useful for first time owners of record players, who may not be used to moving the stylus into position on their own. It’s also useful for those enjoying the wireless aspect of the table’s Bluetooth functionality — where they want to press play and walk away.

In terms of audio options, they are relatively simple: You get to pick between standard analog audio, delivered via a 3.5mm jack and on the back of the table, or connect via Bluetooth. The fact that the analog output is a 3.5mm jack and not standard red and white RCA out is somewhat odd — almost all tables use RCA. Still, given the LP60-BT’s price point and Bluetooth functionality, we imagine most people aren’t purchasing this for the wired connection, and 3.5mm still serves its function just fine.

The table has a built in phono pre-amp and comes with a basic Audio-Technica cartridge. Normally we might recommend upgrading this for better sound quality, but this table is so basic that it doesn’t have a removable cartridge (only the needle can be changed on all of the LP60 models). As previously mentioned, the table also doesn’t have a counterweight either. Those looking to upgrade their sound quality later on will probably have to lose the built-in Bluetooth and buy a higher end table and an outboard Bluetooth transmitter (should they desire to keep that functionality).

We listened to the LP60-BT both wired and wirelessly — using the included phono pre-amp and our trusty and affordable U-Turn Audio Pluto — and with a slew of Bluetooth speakers and headphones.

We weren’t surprised to find a decent, albeit very basic, turntable at the core of the LP60-BT. The non-Bluetooth LP60 has long been the most critically-hailed turntable at its very low price point. Sound quality, though not mind blowing, was as solid on the LP60-BT as on the original model.

Those with multiple Bluetooth playback devices might find a bit of frustration.

The best sound we encountered was via the external U-Turn phono pre-amp and a Peachtree Nova 220SE stereo amplifier, through our Bowers and Wilkins CM8 tower speakers. Classics like an original pressing of The Who’s Who’s Next come through fairly clean for such a basic table, with just a slight amount of muddy low-end to differentiate the LP60-BT from the company’s higher-priced LP-120 mainstay. Heard through the built-in phono pre-amp, the shimmering guitars on Bruce Springsteen’s Born In The USA lost a bit of their luster, but not so much that we felt disappointed. Heavier bass selections like those on Kendrick Lamar’s untitled unmastered. didn’t throw the needle, which is especially important since the weight of the tonearm cannot be adjusted.

When paired to a set of JBL Everest Elite 700 wireless headphones (which took a few tries in our device-laden office), we enjoyed the sound of the Bluetooth side of the LP60-BT. While some of the warm analog sounds of the vinyl were stripped out via digital compression, the audio came through crisp and clear, with the Bluetooth signal itself only experiencing breakup after we got approximately 50 feet away from the table.

Occasional vinyl pops remind you that you are listening to vinyl, but until a side ends it’s actually pretty easy to forget that you are actually listening to it on a turntable and not ripped to a computer. This, as far as we can reckon, is the true purpose of the LP60-BT — for those who want to listen directly to their turntable on headphones without having to deal with wires or an amp in between. For this, it achieves its purpose; You really can listen to your vinyl with just this table and set of wireless headphones.

Though we understand the desirable range of motion provided to headphone listeners via Bluetooth headphones, where the LP60-BT can happily reside in the corner of a room and one can freely move around and still enjoy the audio, using a Bluetooth speaker rather than a full stereo system with this turntable isn’t ideal for a number of reasons.

First and foremost, the mobility of most Bluetooth speakers is hindered by the fact that the turntable is relatively large, fragile, and requires a stable surface and power connection regardless of where you take it. Unlike most Bluetooth speakers, the LP60-BT isn’t something you are going to throw in your bag to take with you except for an extended stay. Use with bigger systems like the Bowers & Wilkins Zeppelin makes sense, but despite numerous tries in our office, we were unable to get our LP60-BT to pair with the Zeppelin we have on hand.

Given this fact, and the fact that a wired connection provides better audio quality outright, those looking to listen to vinyl out loud are better simply plugging the LP60-BT into a normal stereo system.

In fact, it has us wondering why we need the Bluetooth to be built in to the table at all. If we were looking for Bluetooth functionality with a basic turntable, we’d probably forgo the Bluetooth turntable entirely and simply connect a (much cheaper) normal LP60 or higher-end table to wireless headphones via a cheap time-tested outboard Bluetooth adapter like the Taotronics Wireless Portable Bluetooth Transmitter and pocket the cost difference.

The Audio-Technica LP60-BT brings Bluetooth directly to a cheap turntable, but at its price point, you’re better off with the wired original and a cheap Bluetooth transmitter.

While none of the LP60-BT’s competitors offer Bluetooth straight from the table, the basic LP60 can be had for less than $100, and a Bluetooth adapter purchased for about $30. That said, great quality entry-level tables like the Crosley C200 and House Of Marley Stir It Up are much more solid, offer adjustable tonearms and replaceable cartridges, and cost just $50 more than the LP60-BT.

While the build quality of the LP60-BT isn’t as solid as we like to see in entry-level tables (albeit at a much lower price), the non-Bluetooth LP60 has been a beginning vinyl collector’s mainstay for a reason: Barring massive abuse and with needle changes every 500 hours, it should easily last until one wants to upgrade.

No. The fact of the matter is, we’d purchase a table with more long-term upgrade potential, or simply purchase the original LP-60 and a wireless module if we were on a budget.