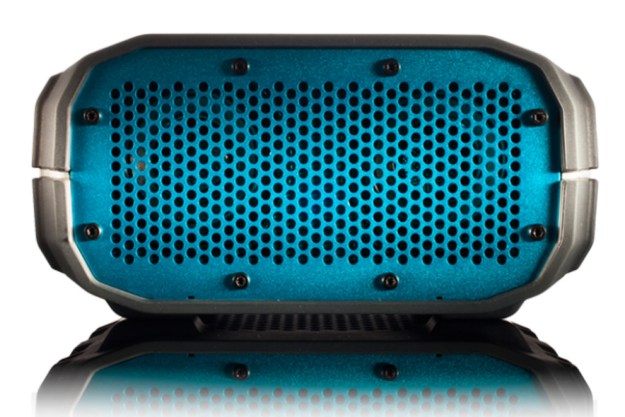 “When it comes down to it, even though it’s pricey, we dig the BRV-1’s great sound and tough design and can’t help but to throw it a recommendation.”

A new blow has been struck in one of the most competitive markets in the tech industry. We’re not talking about smartphones, electric cars, or even designer headphones. Actually, it’s the portable Bluetooth speaker market that seems to have anyone and everyone (even TV manufacturers) looking for a piece of the action. And Braven audio, one our favorite purveyors of these portable sound machines, has laid down the latest gauntlet in the war for Bluetooth feature supremacy: armor.

With its new creation, the BRV-1, Braven has encased all the spoils of its feature packed Braven 600 in a water-resistant plastic shell. At a slightly elevated price of $180, the thick-skinned speaker looks game to stand up to a rainstorm or two, as well as some serious rough-and-tumble treatment.

We recently sat down with the little unit to see if the BRV-1 was as resilient as claimed and to find out how much, if any, sound quality was sacrificed for the sake of weatherproofing. Here’s what we found out.

We half expected the BRV-1 to float out of its package and land on our desk. The speaker looks like a cross between some sort of droid probe, and those electronic binoculars from The Empire Strikes Back. Inside the package we also found a mini-USB to USB cable, a 3.5mm aux input cable, and a carrying strap.

The BRV-1 feels sturdy and, to use a cliché buzzword, rugged. Carved out of the exterior casing’s rubberized casing are two sets of buttons, including volume control keys on the left (which also shuffle songs back and forth when held), and a power/pairing button on the right.

On the back of the device rests a canteen-like cap, which covers all of the BRV-1’s ports, as well as a 5-point LED array which lights at the touch of a button to show battery life. Included connections are a USB input, a mini-USB charging port, and a 3.5mm aux input.

The speaker includes virtually the same electronic innards as the Braven 600 – why mess with a good thing? Beneath the metallic front screen are two 40mm drivers which handle the midrange and upper register and a small LED that flashes white while the unit is connected. The passive radiator “subwoofer” sits on the bottom of the unit, aiding in low-end response.

Like the 600, the BRV-1 is well-loaded with features including a 12-15 hour battery run-time, smartphone charging, and a speakerphone mic. New features include a convenient battery icon that appears on your paired device’s main screen and, of course, water resistance.

Holding down the power button on the speaker sends forth a low hum, at which point pairing is easily accomplished by (oddly enough) holding down the pairing button. A sonar pulse lets you know the unit is searching to connect, and “BRV-1” will soon show up on your device.

We have to give props to Braven for its utilization of Bluetooth version 3.0, which allows for superior signal speeds, as well as low-power transference for optimal battery life.

Sonically speaking, the BRV-1 performed as expected. What we loved about the Braven 600 is almost identically executed by the BRV-1 – the little speaker just works. We weren’t worried about the quality of the Bluetooth transfer or fretting about sound quality; the BRV-1 simply let us just listen to tunes in a smooth, convenient fashion.

… A quick accident from a glass of water, or even a drop off the counter won’t be much of a concern…

The BRV-1’s sound signature is well rounded, with clean and clear treble, a relatively full midrange, and about as much pulse in the low end as you can expect from a speaker that’s smaller than your average clock radio. In the percussion we heard full, smashed snares, articulate cymbal work, and even some decent tone from the top end of kick drums. Vocals came through clearly and without the tinny sheen common to many Bluetooth portables. Guitar and piano were well-defined, if not a bit light.

Reproducing hip hop is clearly not going to be the BRV-1’s forte, nor that of any entry level portable, for that matter. Still, the BRV-1’s passive sub renders bass with a decent amount of depth, adding some welcome body to the low midrange.

Like the Braven 600, we felt the BRV-1’s speakerphone performance was less than stellar. Though it works, you have to be fairly close to the device, or endure frustration on both ends of the call.

Force to complain about the BRV-1’s audio, we might wish a bit more loudness out of the speaker. Though the sound is ample for indoor listening, the great outdoors has a way of swallowing up the sound. A little more headroom would go a long way with us.

As for durability, we have to say we were a bit anxious about testing the BRV-1’s water resistance. With eyes half closed, we poured a full glass of water over the top of the speaker. We were at first impressed to see the beads sliding off, and then horrified to watch them slip maliciously inside the speaker screen and onto the drivers.

Rescuing the unit from the sink, we pressed play on our iPhone 5 and heard a muffled rendition of “Rocket Man” as the water droplets pulsed on the speaker screen in time with the music. Magically, a quick wipe from a rag restored everything back to normal, no harm done. Since the speaker is on loan, that was as far as we went with the water test. But suffice it to say, a quick accident from a glass of water, or even a drop off the counter won’t be much of a concern with the well armored BRV-1.

Though we enjoyed just about everything Braven’s rough-and-tumble BRV-1 does, $180 for an entry-level portable seems a bit steep and likely to give some consumers pause. If you aren’t planning on, say, playing touch football in the rain to a soundtrack, there are more affordable options (including the Braven 600) that will fill your needs. Still, it’s important to consider other benefits of the speaker’s protection, like bathrooms and children – or the two combined. When it comes down to it, even though it’s pricey, we dig the BRV-1’s great sound and tough design and can’t help but to throw it a recommendation.

2022’s best TVs for under $1,000
PSB Alpha iQ Streaming Powered Speakers connect to pretty much anything
Sony’s SRS-XV900 pumps its party speaker lineup to the next level
Google Chromecast tips and tricks to make you a master caster
Amazon Fire TV tips and tricks: 8 ways to master your streaming
What’s new on Hulu in October and what’s leaving soon
What’s new on Disney+ in October 2022
The ‘streaming wars’ aren’t what you think
How to set up a Google Chromecast to get streaming fast
How to clean your TV screen
How to share a Spotify playlist
How to watch the DC movies in order
Thursday Night Football streaming issues ‘going to be less and less a thing’