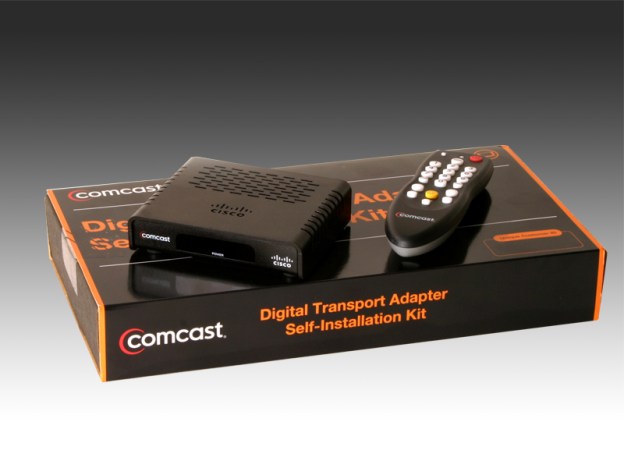 Got Comcast? Hope you like little black boxes, because you’ll be needing them to get any kind of cable TV service soon. According to a recent statement made on its website’s help and support pages, Comcast is making good on an FCC ruling which allows the company to encrypt even its most basic channels such that they can’t be viewed without the use of a digital adapter, converter box or CableCard-enabled device.

Until now, Comcast customers with a digital television, DVR or TV tuner card for their computers could access Comcast’s most basic channel packages without the use of any additional equipment. In some markets, those packages may even include channels like Discovery, AMC and WGN in addition to local affiliates of ABC CBS, NBC, FOX and PBS, all of which broadcast their signals over the air for free. Most people pay for the basic channel packages, but a little-known secret is that, in some areas, if you subscribed to Comcast’s Internet service, these channels were being piped into your home anyway and were available at no additional cost. In fact, we know a few folks who have taken advantage of this little loophole over the past few years.

It is important to note that the DTA (digital transport adapter) box brings no advantages to the table. In fact, it will strip some of Comcast’s customers of their ability to watch some of their stations in HD. The DTA doesn’t allow access to on-screen programming guides or any on-demand services either. It is, in essence, a de-scrambler and nothing more. Customers are faced with the added hassle of either programming the extremely basic DTA remote with their TV’s remote code or, conversely, programming their TV remote with the DTA’s code.

Is Comcast just closing this loophole? Hardly. By requiring the use of company-owned equipment, Comcast not only ensures nobody gets a free ride, it also secures itself a new revenue stream. To be fair, Comcast is offering Limited Basic customers who have been getting their service box-free up to two DTA devices (digital adapters) free of charge for up to two years. After the two years is up, each DTA in use will come with a fee assessed at “market rate” – currently $1.99 per device. Those who make changes to their service will have to start paying the fees right away.

The move also presents Comcast with an opportunity to soften the impact of lost revenue when fledgling cord-cutters call to cancel their cable service in favor of on-demand services such as Netflix, Hulu and Amazon Instant. Comcast recently began offering a new Internet package which tacks on its Limited Basic cable service on top of its Blast Internet service for just $5.00 more – a deal that seems hard to pass up. Add in two or three DTA boxes, though, and the fees go up further still.

Are there any options to renting Comcast’s DTA boxes? Not really. You can pick up a DTA at ebay for a few bucks, but Comcast considers devices like that as “stolen” and will not activate them. For now, if you want to watch any Comcast cable channels, you’ll have to pick up a DTA for each TV you want serviced. Otherwise, you might want to start warming up to the idea of picking up a good digital antenna for free OTA (over the air) reception of your local channels. For tips on this and other cord-cutting ideas, visit our Cord Cutting 101 topics page.

Topics
Why the Nest Hub Max still rocks as a kitchen TV
The best Blu-ray players for 2023
The best speakers for 2023: great hi-fi options for music and more
The best HDMI cables you can buy in 2023
Stream live sports without cable with Sling — now 50% off
OnePlus Buds Pro 2 to support Android’s new spatial audio feature
Should you mount your TV above a fireplace?
Disney Plus Free Trial: Can you watch for free in 2023?
The best subwoofers you can buy in 2023
The best Dolby Atmos soundbars for 2023
Super Bowl 2023 halftime show: who’s performing?
The best headphones for running in 2023
Amazon adds audio personalization to Echo Buds 2