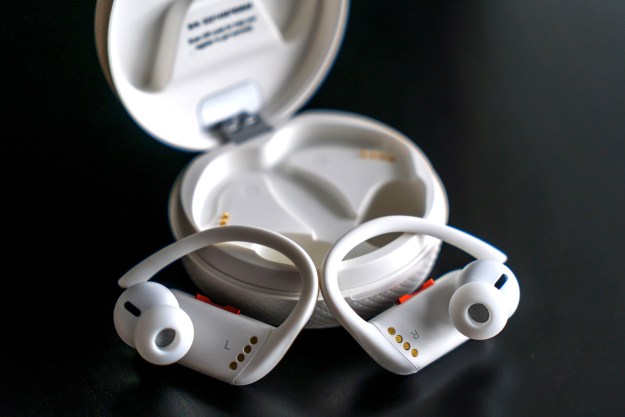 “Perfect for fitness buffs looking for a more affordable option.”

Since their debut, workout fans have been turning to the Powerbeats Pro for a set of wireless earbuds that fit securely, offer great sound, and provide protection from sweat and water. But the Powerbeats Pro are now several years old, and despite their excellent battery life, they lack active noise cancellation (ANC), a transparency mode, and wireless charging, which makes their $249 price — as much as a six-month gym membership — harder to swallow now that other options exist.

One of the newest of those options is the Dottir Freedom On-Grid, a set of sports earbuds that look and feel a lot like the Powerbeats Pro, but that pack many of the features the Beats lacks. They also have a feel-good story behind them with two friends from Iceland, Katrin Davidsdottir and Annie Thorisdottir, designing the On-Grid as a way to address their need for earbuds that can handle athletic workouts. Do they stand out enough to get your money instead of filling Beats’ coffers?

Dottir doesn’t skimp on what comes in the box. It includes a pouch and cleaning cloth, along with a short USB-C cable, but what stands out even more is the 12 different sizes of eartips. That’s highly unusual for any pair of earbuds and plays a big role in how well they can fit and work. You also get a small quick guide manual to learn how to use the earbuds.

The Powerbeats Pro comparisons inevitably begin with the design. Dottir didn’t carbon copy Beats’ earbuds, but the similarities are hard to ignore.

Each housing sports physical buttons on top, along with touch surfaces on the outer edges. The buttons control both volume and track skipping, while the touch surfaces control play/pause, accepting calls, switching between ANC and ambient modes, accessing your voice assistant, and powering the earbuds off. The controls are fine, though the touch-sensitive areas are, well, a little too sensitive sometimes. I accidentally hung up on calls more than once trying to put them on after getting a call on my phone. The Powerbeats hold an edge here thanks to their physical-only controls, which behave more consistently.

Dottir made them IPX7 water resistant, which is considerably more protection than that of the Powerbeats Pro’s IPX4.

The earbuds have wear sensors, which immediately pause playback when you remove one from your ear, and resume your music when you reinsert them, making them super convenient if you need to quickly hear something or talk to someone without tapping any of the controls.

To highlight the sporty focus here, Dottir made them IPX7 water resistant, which is considerably more protection than that of the Powerbeats Pro’s IPX4. With IPX7, you never need to worry about sweat, or wearing the Freedom On-Grid in the shower, and you can even fully submerge them in water when you need to clean them.

The case has its own allure, like a cross between a neat makeup case and hockey puck. A spring-loaded, double hinge makes it effortless to open once you overcome the magnets that keep the case closed. Those magnets are surprisingly powerful — I found that I had to sometimes be careful as it could snap shut, almost clipping my fingers in the process.

The earbuds fit nicely inside, with magnets holding them in place to charge. My review unit was the white variant, which looked slick, yet the available ash gray version also looks nice. No funky colors here, like Beats, in case you were curious.

No app to be found

As a small brand, I can understand that Dottir didn’t develop an app to support the Freedom On-Grid, but it’s one of those omissions that becomes more obvious because of how common companion apps have become. More and more cheaper earbuds are getting that kind of support, so when a pair that costs more doesn’t, it’s something I’m going to call out.

Hip-hop, R&B, and EDM listeners will definitely feel the beat.

Without an app, there’s no way to adjust EQ (though some streaming apps offer their own EQ adjustments), customize the controls, or add handy extras like Find My Earbuds.  It’s a missed opportunity to stand out further from Beats, which never added the Powerbeats Pro to its own app (on Android), even after coming out with the Beats Studio Buds.

Comfort and fit play a big role here. The earhooks already provide the stability, so the onus is more on finding the right tips among the dozen available to see which ones seal your ears best. This is great news for folks with hard-to-fit ears, who might find the usual selection of three sizes inadequate. And since the better the fit (and seal), the better the bass, you should have no trouble maximizing comfort and sound quality.

Sticking with the overall theme, though, the Freedom On-Grid push a bass-heavy sound where it’s clear early on that the lows get a lot of love within the audio spectrum. Dottir tuned them to appeal to a workout crowd that wants to get pumped up by a thicker sound blaring into their ears. I would say hip-hop, R&B, and EDM listeners will definitely feel the beat, but even if you prefer hard rock for workouts, the sound won’t feel like it’s missing something drastic.

In another clear upstaging of the Powerbeats Pro, the On-Grid include aptX codec support, which Android users with compatible phones will appreciate. You also get AAC, so the iOS crowd isn’t left longing for anything, either.

On windy days outside, it’s virtually impossible to hold a conversation.

Like the Powerbeats Pro, however, spoken word content, like podcasts, won’t sound quite as good because of the heavier bass. The sporty focus makes sense in that regard, and you should be fine when listening to a workout routine through your headphones, for instance, but these aren’t earbuds I would necessarily recommend if you’re bingeing podcasts between workouts or runs.

The Freedom On-Grid’s ANC is fine, and does an adequate job dampening background noise when indoors or when conditions outside are calm. But in order for ANC to do its job, it needs very good passive sound isolation, and this where the earhook design of the Freedom On-Grid creates a challenge. Because the main body of the earbuds sit outside your ear (then wrap around your ear), you can only push them in so far. If your ears are deep, you could have trouble maintaining that all-important seal around the entrance of your ear canal.

I found that on really windy days, gusts were able to penetrate into my ears, and no amount of ANC could stifle the noise produced by those gusts. You might think that if the seal is good enough for sound quality, it should be able to keep wind out too, but this isn’t always the case. This proved to be a challenge for phone calls too.  In quieter settings, call quality is perfectly fine. On windy days outside, it’s virtually impossible to hold a conversation. Riding a bike and trying to chat? Forget about it.

Transparency mode — which lets outside sounds in so you can keep tabs on your surroundings — works well, and is on par with other earbuds in the same price range. Unfortunately, there’s no way to switch between ANC and transparency with a single gesture. You need to press and hold the touch control to cycle through ANC off, transparency mode, and ANC on.

The Bluetooth connection holds pretty steady, albeit with some weird bugaboos. For reasons I couldn’t understand, there were times I would take the earbuds out of their case, only to have audio come out of only one side. Putting the silent one back in the case, closing it, and then taking it out again did the trick, although I did have to reset them once to solve that issue.

I liked that the Freedom On-Grid work seamlessly in mono mode. Just take one of the buds out — and it can be either one — for use as a mono headset. Both earbuds connect to the paired device, enabling them to effectively function independently from one another that way. That doesn’t mean you can pair each one with different devices independently and simultaneously, nor can you pair and stay connected to two devices at once with both.

You don’t need to worry about the Freedom On-Grid’s ability to keep up with your active lifestyle. They can play for up to 12 hours at default volume with ANC off, and as long as 10 hours with it on. Those are impressive numbers, and with five full charges coming from the case, you’re looking at 72 hours (ANC off) or 60 hours (ANC on) to work with. That’s very high, even by today’s standards, and totally smokes the Powerbeats Pro’s nine hours/24 hours.

The case supports wireless charging, and can charge reasonably quickly, though plugging in via USB-C will get you totally up and running much faster. Dottir doesn’t mention a fast charging option, and I didn’t catch one myself while testing.

It was easy for me to see who Dottir thought would want to wear these earbuds, and it’s overwhelmingly the active crowd. These aren’t the earbuds for you if you’re looking for something to lounge in or even wear on a commute to work. There are plenty of options for that, so looking for a lot of bass when breaking a sweat is key to liking what the Freedom On-Grid can do.

The most obvious alternative are the Beats Powerbeats Pro, as mentioned throughout this review. They have better overall sound quality, but there is no companion app, no ANC, no transparency, no wireless charging, and they can’t hold a candle to the Freedom On-Grid when it comes to battery life. The only reason to spend the extra $100 to buy the Powerbeats Pro would be if you’re an iPhone user who needs hands-free access to Siri — one area where non-Apple, non-Beats earbuds simply can’t compete.

The Jabra Elite 4 Active are slightly cheaper, yet offer a more balanced sound, app support with EQ, and better physical controls. However, they don’t have wear sensors and there’s no support for wireless charging. Their lack of earhooks means they won’t be quite as secure, but that’s unlikely to be a problem for most activities. and there’s no denying how comfortable they are.

For tighter budgets and a similar fit and feel, the JLab Audio Epic Air Sport ANC will cost roughly half, with the same durability and similar sound signature. Battery life won’t last as long per charge, and they’re not as refined as the Freedom On-Grid, but they do the job well when you just want earbuds to work out in.

Given the IPX7 rating for water resistance and the generally nice build quality, these earbuds should last you a good while if you take care of them. Wipe them down to keep salt from sweat getting into any crevices, and you should be fine. Dottir offers a standard one-year warranty to cover functional issues, except for physical or water damage.

Yes. We wish they performed better in windy conditions and had a few extra features, but if you need a set of workout or running earbuds, prefer a bass-heavy sound, and don’t want to spend $249 on the Powerbeats Pro, the Dottir Freedom On-Grid are a great option.