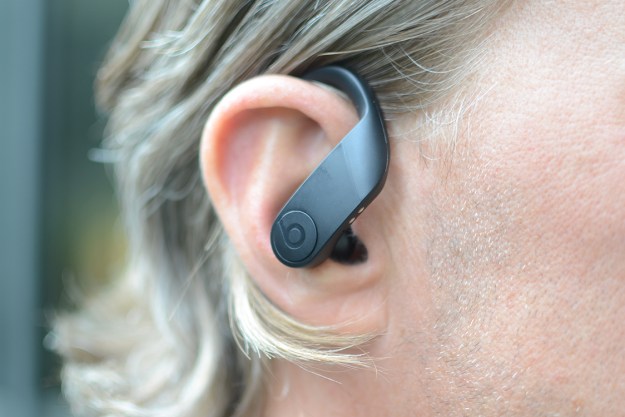 Just weeks after Apple revealed its somewhat lackluster new AirPods, the company surprised us with a new pair of Beats-branded buds that, like the AirPods, are totally wireless. The Powerbeats Pro call back to their sporty predecessors, earhooks and all, but with a more sophisticated design.

Unfortunately, while the Pro pack plenty of swoon-worthy features, a mix of intermittent connection woes and a lofty $250 price puts the brakes on these buds.

The Powerbeats Pro look more contemporary than the Powerbeats3. Gone is the clip-like design that houses the main components; that’s replaced by a housing that’s much thinner and less obtrusive. Pulling them from their massive charging case is a bit awkward at first due to their angled acoustic chambers, but tuggy magnets guide your hand as you place them in and out of their portable lair.

The earhooks cement the Powerbeats Pro as workout buds, and they can be awkward to put in. After adjusting the base of the clips to your ears, though, they find their groove and go on relatively smoothly, with a fit that’s both secure and comfy. To our eyes, they also look a lot better than previous Powerbeats models — the clips are more elegant, striking a thinner, less obtrusive profile. Speaking of looks, the Powerbeats Pro are now available in all of the colors promised at launch: Ivory, moss, navy, and black.

With a 17-percent reduction in weight, and 23 percent less internal volume, the Pro are more efficiently designed, too. Best of all, of course, there’s no longer a clunky wire tethering each earbud together.

Finding the right eartips is very important to the sound, and we cycled through a couple of pairs to get it right. Even then, you won’t get serious sound isolation. Still, it’s better than the AirPods, and you probably don’t want total isolation when working out on crowded streets.

Along with four pairs of eartips, the Powerbeats Pro’s sleek black box bears a Lightning cable wound neatly in a loop, and basic instructions and marketing material on the underside. A sticker on the case’s lid instructs you to leave the earbuds inside to pair with your device — a thoughtful inclusion, though we wish the earbuds could also be paired sans case.

Two buttons on each earbud serve as intuitive controls. A volume rocker rests at the top edge, and at the side is a multi-function button that doubles as the Beats logo. Like the AirPods, the mirrored design of each earbud allows you to use either hand to control playback, calling, and volume, and you can also use each earbud independently. The multi-function button can also be held to talk to Siri. Unfortunately for Android users, the same can’t be said for Google Assistant.

The buttons are a little too easy to use. We found ourselves accidentally pausing or playing tracks, lowering volume on the rocker instead of raising it, and even dropping calls as we got acclimated. Over time, though, we enjoyed the system, and the simple inclusion of easy-access volume control already bests the AirPods, among others.

As mentioned, the Powerbeats Pro are water-resistant with an IPX4 rating, meaning they’re protected against splashing and sweat but shouldn’t be submerged.

All hail the H1 chip

One of the best features of Apple’s AirPods 2 is the new H1 processor, and that same chip sits inside the new Powerbeats Pro. It’s an evolution of the W1 chip from the original AirPods and other Beats products, and it’s an absolute ace when it comes to quick and easy pairing, making the Powerbeats Pro and new AirPods the easiest of their kind to pair to virtually any device.

Got an iPhone? The Pro pair automatically by opening the case and holding it close. Even with an Android phone, pairing is near-instant.

The benefit of being owned by Apple means access to the company’s technology.

Call clarity is improved, too, thanks to a speech-detecting accelerometer inside the Pro that identifies when the wearer’s jaw is moving through vibrations. Two beamforming microphones work in coordination with this sensor to filter out external noise and target the wearer’s voice. In practice, we were able to carry a conversation outside our blustery downtown office with ease.

To round it off, there are long- and short-range optical sensors on the Powerbeats Pro that automatically play or pause music when the earbuds are placed in or removed from your ears, again like the AirPods. It’s a great feature, and we noted its simple convenience when passing a neighbor on a run. We were able to quickly remove an earbud, chat for a few moments, and then instantly continue where we’d left off.

One workout feature not supported is ambient audio pass-through for awareness while running or biking, something we’d expect in pricey workout buds. It’s a miss, but thanks to the H1, it’s easy to use just one earbud in busy areas, then pop in both when you’re on safer ground. Since most sports earbuds we test can’t autopause or connect individually, it’s essentially a tradeoff.

Speaking of running, our first workout with the Powerbeats Pro is where we ran into a problem. Spotty wireless connection. We’d had a blip or two walking downtown, but that grew into a succession of between 10 and 15 dropouts. It was quite the headache, and took away from the luxury vibe the sport-centric buds otherwise present.

Perhaps just as frustrating was the issue’s intermittency. The second run we took produced no disconnects, save a tiny cutout during the cooldown. After testing on multiple phones, however, the issues continued, ranging from momentary isolated problems to multiple successive drops over several minutes.

We reached out to Apple’s reps, who sent out a new pair overnight. The second pair seem to be slightly better, offering no stuttering during our third run (we had to do so much running) and they cut out only a couple of times in a walk downtown with the phone in a jacket pocket. But when placed it in a back pocket, the earbuds cut out several times in a row. We can’t say you’ll have similar issues, but we also can’t guarantee blip-free connection — especially in crowded areas. And with earbuds this pricey, that’s a problem.

The Powerbeats Pro’s charging case is big — comically large, in fact, fitting bulbously in pants pockets and weighing enough to register as a paperweight. Especially when compared to the AirPods’ dainty little case, this is one big hunk of plastic.

That said, while we wish it was smaller, it has to be larger if ear hooks are part of the design. Even if they were removable, they’d have to go somewhere.

There’s a good reason to leave the case home, though. The Powerbeats Pro claims nine hours of playback time per charge. That’s three to four hours more than most top competitors, including Apple’s own AirPods 2 and Samsung’s slick and nimble Galaxy Buds.

The connection issues could be a real headache.

It’s fairly difficult to test this in real-life scenarios for two reasons: One, accelerometers in the headphones shut them down after just minutes on a desk to conserve battery, and two, there’s no real battery icon to speak of, save when swiping left on or placing the buds next to an iPhone. The case does have an LED light that indicates when battery is low, but Android users will be doing a lot of guesswork when leaving the case at home.

That said, we’re certain we got at least 8-9 hours of playback the first time we killed them, and even after over 2+ hours, the earbuds registered at 86 percent battery. The case will get you almost two more charges for more than 24 hours of battery life. The case can’t charge wirelessly like the new AirPods’ optional case, requiring a Lightning cable (we wish there was a USB-C port but this is an Apple mobile accessory after all), but quick charging is impressive, offering an hour of playback on 5 minutes charge, and 4.5 hours on 15 minutes.

Beats gonna beat, and these headphones certainly bring it when it comes to the bass. That can lead to moments that offer a little too much thump for some ears, especially notable in tunes that don’t really call for it, such as the driving bass in John Prine’s Please Don’t Bury Me. But make no mistake, these aren’t your grandfather’s Beats — partly because Beats didn’t exist then, but also because Apple has refined the sound signature significantly for clear, detailed, and dynamic sound.

Apple claims in its review guide that the Powerbeats Pro have 60% less harmonic distortion than the Powerbeats3, and it’s easy to hear the results. The sound signature is strikingly clear in the upper register, and instrumental separation is especially impressive, allowing you to revel in the subtleties. In Depeche Mode’s World in My Eyes, for example, you can really dig into the metallic definition in instruments like the hi-hat synth in the right side, adding up to a beautiful sound collage.

These aren’t going to be confused with audiophile monitors, and they also can’t best our top sonic choice in their class, the Sennheiser Momentum, but they easily leave the AirPods — and plenty of other competitors — in the dust when it comes to fidelity. As long as you don’t mind some bump in your groove — and you’re not experiencing cut-outs — the Powerbeats Pro present a very satisfying listening experience.

Apple’s latest earbuds may bear the Beats name and iconic style, but these feel much more like the next evolution for Apple’s wireless roadmap, outdoing the AirPods in almost every way. Unfortunately, the one place they can’t match Apple’s AirPods is the one that’s most important to most wireless earbuds users: A reliable connection. For now, we’ll have to wait for this to be addressed in future updates.

Our first pick for seriously worthy sports earbuds is the tried-and-true Jabra Elite Active 65T, which offer many of the same features as the Powerbeats Pro, as well as extremely solid connection and ambient sound awareness, all for a lot less cash. They only pack 5 hours of battery, but that should do just fine for most workouts.

Looking to save even more? Samsung’s Galaxy Buds offer 6 hours of battery, and while they may not be tailor-made for working out, they’re sweat resistant, incredibly reliable, and they worked great for our daily grind — all at just $130.

Apple’s own AirPods Pro are a prime competitor, since they also sell for $250. They offer great audio quality, top-notch noise cancellation, and they’re more reliable.

In all respects but one, the Powerbeats Pro seem poised to lead the charge for the next wave of fully wireless earbuds. That said, while we expect Apple to address the connection issues we experienced in the near future, perhaps in a firmware update, we can’t judge their longevity until that happens.

No. The Powerbeats Pro sound great, but we can’t recommend them until we’re convinced the connection issues we experienced are fixed.