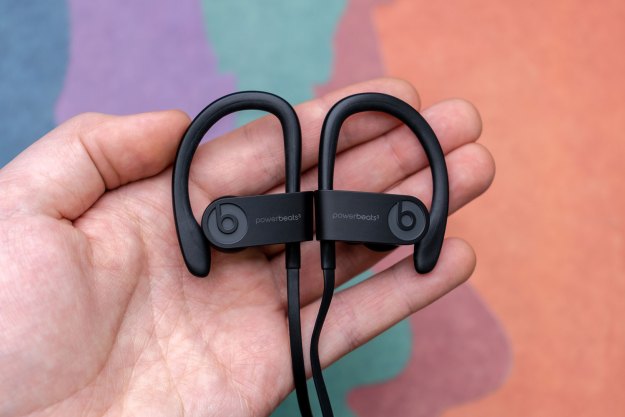 “If hip-hop is your main jam, the Powerbeats3 deliver mondo bass in a sporty package.”

The Powerbeats3, the third iteration of the bass-heavy, sport-ready earbuds from Apple’s Beats by Dre offshoot, were among the most popular wireless earbuds available when they debuted in 2016. With the imminent release of Beats’ new Powerbeats Pro — which ditch the band between the buds to go fully wireless à la Apple’s AirPods — it’s worth taking a look back at the Powerbeats3.

Are these hip-hop loving headphones still worthy of your consideration? We’re not so sure. Though the Powerbeats3’s price has dropped by as much as half since their debut, their original $200 price tag was definitely a big ask. What’s more, the competition has only gotten stronger, making today’s wireless headphone market a tough row to hoe for Dre’s emblematic earbuds.

The Powerbeats3 arrive in a white-and-red box which seems impossible to open at first blush. A second glance reveals a rip strip on the front that unleashes the buds from their paper bed. Pulling out the buds reveals large matte plastic shells connected by a rubberized tether that can be cinched up for a tighter fit on your neck.

Underneath the top layer is a collection of accessories, including a selection of three additional pairs of eartips (four in total), a tiny USB-to-micro USB charging cable, instructions, and a collection of Beats stickers that look a lot like the trademark for Target retail stores. There’s also a rubberized case that looks like a futuristic coin purse — it won’t protect the buds from drops, but may help keep them untangled, we suppose.

You’ve no doubt seen the Powerbeats3 (or their predecessors) while out and about. Their signature horizontal-strip design and wraparound hooks are unmistakable, even if you don’t know the brand, and they’ve inspired plenty of copycats. They’re most commonly seen in “Defiant” red and black, but our all-black review pair offers a more subdued look.

The Powerbeats3’s 12-hour battery is still impressive for their class.

Like virtually all banded wireless buds, the Powerbeats3 come with a three-button microphone control piece attached to the rubber strip between them. The volume and pause/play/calling keys are all where they should be, though the remote is on the left side, rather than on the right like most competitors, which took some getting used to. While easy to use on the go, the control piece feels a bit flimsy compared to those on similar earbuds from V-Moda and others, especially for $200 headphones. Even at half that price, we’d prefer some aluminum or heavier plastic there for durability.

One great feature of the Powerbeats3 is their 12-hour max battery, which is still impressive in their class 2-plus years on. We expect the new Powerbeats Pro to offer 9 hours per charge, with two charges in the case for over 24 hours total charge, which will also be among the top on offer. The Powerbeats3 also provide up to an hour of playback time on 5 minutes charge, a solid feat for a device still leaning on micro USB connection.

Apple’s W1 chip — the same one inside the original AirPods — gives these earbuds blip-free wireless connection with Apple’s AAC codec, intuitive pairing for iOS devices, and plenty of range to roam from your source before the connection scatters. We had one odd instance in which the buds were on and connected to the phone with Spotify playing music, but no sound coming out. Pressing the power/pair button on the left earbud to power cycle the earbuds resolved the issue, so we’re willing to assume it was just a quirk for now.

The Powerbeats3 are sweat- and water-resistant, but since Apple doesn’t release IP ratings, we don’t know exactly how much these buds can handle — just know you shouldn’t expose them to jets of water, and definitely shouldn’t submerge them.

While the buds feel a bit bulbous in our ears, they’re relatively comfortable for a few hours of wear, and they also held on well during a short jog thanks to those wraparound hooks. We’re not all that crazy about the hooks for commutes or the office, though, and wish they could be removed like some competitors.

The name really says it all. Beats headphones are built for bass, and that’s what they deliver — powerful, droning, at times overpowering bass. It’s not the most musical bass you can get for the money, and it really does hold court in most of the music you’ll play, but taut clarity in the treble keeps it from masking other instruments like some bass-heavy options out there.

They held on well during a short jog thanks to those wraparound hooks.

While we know people love these headphones because they accentuate the beat (imagine that), there’s also some solid detail in the upper register that actually outclasses Apple’s other wireless headphones, the AirPods. Particularly sweet are instruments like horns and guitar, which are served up with better definition than the AirPods’ smoothed-over sound.

The difference is that these headphones aren’t nearly as accessible-sounding as Apple’s please-the-crowd Pods, rewriting just about every song you cue up — from the Beatles to Frank Sinatra — with a bass guitar or kick-drum solo. Even if that’s your thing, there are options with more clarity and fuller midrange sound at price points right around the $100 line, and plenty of cheaper sports options if all you need is something to jam out to on your jog.

Apple offers a one-year warranty from date of original purchase. You can learn more about the warranty on the company’s website.

While not the best option for the money, if your main jam is hip-hop, the Powerbeats3 deliver clear vocals alongside mondo bass in a package that will stay put.

There are plenty of alternatives that deliver great sound in a sporty package at similar pricing. The first that comes to mind is V-Moda’s Forza Metallo Wireless, which offer brilliant sound with clear, authoritative bass. If you like the earhook design, V-Moda also has the Bassfit, which offer bigger bass as well as removable earhooks.

For a bit more cash, you can also step into fully wireless options like JBL/Under Armour’s Flash headphones or Jabra’s Elite Active 65T. And that’s just for starters. Our lists for the best true wireless earbuds and best sports headphones offer plenty of other enticing choices.

While we haven’t had the earbuds long enough to test them over time, there have been enough complaints online about durability to give us pause about the Powerbeats3. What’s more, a burgeoning collection of wireless earbuds that aren’t banded together makes these headphones less enticing than they were upon debut, even at their lower price point.

If you’re a bass head who just loves that Beats style, and you can find them for $100 or less, you might still consider the Powerbeats3. But for our money, there are plenty of better options for both your daily workout, and your daily life.