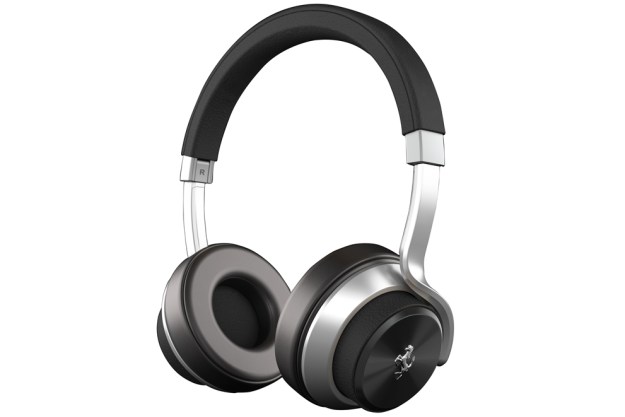 “Though the Cavallino T350 is a gorgeous headset, under the hood there is much left to be desired.”

There’s just something about Ferrari

Ahh, to be young and in love. And if you’re going to be in love, you might as well shoot for the prom queen. We’re speaking, of course, about Ferrari. If you’re anything like us, someone showed you those red curves in action at an early age. And whether it was Matthew Broderick, Al Pacino, or our personal favorite, Corey Haim in the escape scene from License to Drive, the image stuck. Back in those days, the notion of one day owning the ultimate Italian sports car (sorry Lamborghini) actually seemed possible. But for most of us, it was just a fantasy.

Or was it? With its new headset, the Ferrari Cavallino T350, audio company Logic3 hopes to get 99 percent of us one tantalizing step closer to that Ferrari feeling. Licensed by Ferrari, the headset offers clean, supple leather, plenty of curves, and even a pair of silver stallions. And at $400, it might not be quite at Ferrari pricing for a headset, but it’s at least pushing Alfa Romeo status.

The question is: Do the T350 deliver Ferrari performance? We recently sat down with these beauties for a thorough test drive in an effort to determine whether the engine matches the body. Here’s what we found.

The T350 comes packaged in a sleek black carrying case canvassed in shimmering faux carbon bands. Pulling back the case’s lid, we got our first glimpse of the headset lying in a cloth frame, its chrome lines folded in supple black and tan leather. Affixed to the case with Velcro, we found a small netted bag of accessories including 3 braided cables, an airline adapter, and a ¼-inch adapter, all gold-plated, of course. The entire content of the case was pungent with the coveted “new car smell”.

Unlike Logic3’s Bluetooth dock, the GT1 – which was elegantly crafted, but only reminiscent of a Ferrari due to the ubiquitous gleaming stallions spread across its exterior – the T350 headset does a good job of imparting the aura of an Italian sports sedan. The tan leather that arches across the headband immediately calls to mind an extravagant steering wheel. If you look closely, you can just make Magnum P.I.’s hand reaching towards the headband for a hard turn in the thick of a car chase.

Offsetting the headset’s cleanly stitched tan shell are black, donut-shaped ear pads, also cloaked in soft leather skins. The circular ear cups which house the ear pads are layered in sparkling metal, as are the dense arms which extend in forked ribbons to attach the cups to the headband chassis. Inside the ear cups are the T350’s 40mm drivers, covered by black fabric screens.

As mentioned above, the headset comes with a trio of removable braided cables which attach to the left ear cup. All of them are black, with silver aluminum casings at each end bearing the Ferrari logo in white lettering. The collection includes a standard cable, one with an iOS 3-button mic piece, and another with a single-button mic piece for all other smartphones. Each cable is approximately 4 feet in length and terminated with gold-plated 3.5mm jacks.

The only items on the T350 that don’t feel luxurious are the flimsy plastic caps that cover the outside of the driver housings, both of which are adorned with a silver Ferrari stallion. The right cap houses the switch which activates noise cancelling (as well as sound), while the left is removable to access the headset’s AAA batteries.

The T350 is one of the diminishing breed of active noise cancelling headsets that doesn’t work in passive mode (i.e. without power). Taking into account how easy it is to forget to turn off your gear, we envision a number of potentially frustrating situations. Who wants to get stuck on a plane with a cumbersome $400 paper weight?

The T350 did a satisfactory job of removing peripheral noise, almost completely silencing all hum and low tones, while significantly subduing high-register noise. We tested the headset while vacuuming and while running a very loud dishwasher. We were impressed that our dishwasher’s gushing roar was cut down to a subtle rippling. The vacuum, too, was reduced to a slight hum, barely audible over music at medium volume levels.

The luxurious look and feel the T350 evoked when pulled from their case was replicated via an equally luxurious fit. The soft leather ear pads caressed our ears and the creamy tan headband felt as soft and posh on the head as it did in our hands. Where fit and finish is concerned, we can register no complaint.

We tested the T350 as we do most headphones: by listening to a wide range of music served up through an iPhone 5. Unfortunately, we were disappointed to find the T350’s smooth and lavish design contrasted by an excruciatingly bright sound signature, defined by its brittle upper register, a weak-bodied midrange, and a constrained low end.

After listening to the T350 for a few hours, it was clear the headphones’ sound is a lot like a Michael Bay film; it’s very expensive, you’re subjected to a barrage of shiny images bouncing around, and everything feels cold, shallow, and artificial.

…The percussion and guitar work on Pearl Jam’s “Parachutes”, was so cold and brittle, we imagined the instruments covered in a layer of icy frost – like something from a breath mint commercial.

We started off by cueing the Dave Matthews track, “Stay”. The song begins with a single acoustic guitar, but by the time the band had kicked in, we already had a pretty good idea of what we were in for. The guitar came off as extremely bright, sounding like a cross between a nylon classical guitar and the pickup output of an Ovation. The tone became increasingly more hostile as the percussion entered, producing ear-piercing high hats and crash cymbals, anemic-sounding snares, and stubby toms. Matthews’ vocal was gratingly sharp, and the overall tone was a bit antiseptic.

As we moved on to other genres, the sound fluctuated from mediocre to painful, depending on the brightness of the recording itself. Darker albums from bands like the Beatles and Led Zeppelin were less abrasive, but they also sounded like completely foreign recordings. The tremolo electric guitar from Zeppelin’s “Down by the Seaside”, for instance, was so tinny and thin, it sounded like the Nashville-inspired guitar tone you’d find in a Waylon Jennings tune, giving the piece a surreal country vibe.

Brighter rock recordings came off more like high-glossed pop hits, in the vein of early Britney Spears albums. R.E.M.’s “Can’t Get There from Here” was nothing more than a shiny glint of two-dimensional sound; almost as if it was rendered by a bad radio speaker. And the percussion and guitar work on Pearl Jam’s “Parachutes”, was so cold and brittle, we imagined the instruments covered in a layer of icy frost – like something from a breath mint commercial. We’ve seldom heard Eddie Vedders’ warm baritone vocal showcased with such a lack of depth from an over-ear headset.

To be fair, the T350’s drivers displayed a clean representation of the music, with an impressive amount of dimension and a wide stereo field. But unfortunately, the spiky, inorganic sound signature laid its cold hand over every piece of music we tested, creating a piercing facade that was unpleasant to listen to more often than not.

When a headset is priced at $400, there is little room for error. While we understand there is a premium to be paid for the Ferrari name, we also expect that name to represent the ultimate in performance, no matter the product. Though the Cavallino T350 is a gorgeous headset, under the hood there is much left to be desired. If you’re looking for auditory thrills from a noise-cancelling headset, we suggest you check out the Monster Inspiration active noise cancellers or the Audio-Technica ATH-ANC9 instead.