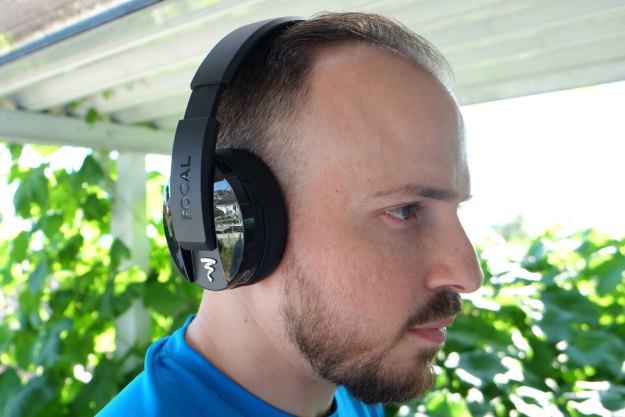 Wireless headphones are the norm now, which is why Focal’s decision to release a wired version of its Listen model last year was surprising. The company’s decision to stick with the old fashioned ways didn’t last, though. As if on cue, Focal has cut out the cords this year with the Listen Wireless, crafting a Bluetooth-enabled version that aims to maintain the same high-quality sound, and lasts up to 20 hours per charge. In our Focal Listen wireless headphone review, we put the latest from the company to the test to see how they stand up.

Focal went with new packaging for the Listen Wireless with a box that lifts up from the top, but beyond that, little was changed inside. The headphones come with a soft carrying case that includes a 3.5mm audio cable, a Micro USB cable for charging the battery, and a small user manual covering the basic features and controls.

Focal chose not to overhaul the initial design for the Listen Wireless, preferring to tweak it to accommodate the Bluetooth-ready components. Aesthetically, the cans have a piano black finish to replace the brushed silver of the previous model, but the form factor is basically the same. The wireless components were crammed into the cans without the need to make them bigger.

The plush cups protrude slightly less than the original Listen, but the earpieces are still nice and wide, helping to isolate the sound while retaining comfort for longer listening periods. The memory foam in the leather cushions is as good as it was in the previous model, where the wider opening not only feels comfortable nestling each ear, but also creating good noise isolation.

As before, the words “Listen Beyond” are etched into the top of the headband, with the same plastic body and rubberized cushion lining the inner portion. To reduce the footprint, both earpieces snap inward to fit in the carrying case. Focal has made the headband a little more flexible, as well. In the wired version, it moved quite well laterally, making it easy to take them on or off, but here, they seem to have more give when the band is twisted, possibly designed for better protection against wear and tear.

The wireless components were crammed into the cans without having to make them bigger.

The right earcup has an on/off switch at the back that puts the Listen Wireless in pairing mode upon startup. Below that lies the rubberized Bluetooth pairing button, with volume buttons laid out under that. Arrayed on the earcup’s front side are rubberized buttons for playback and track navigation. The Micro USB port to charge the battery rests just below.

The left earcup boasts a headphone jack for the detachable audio cable for wired playback if and when the battery dies, with a twist-to-lock mechanism that keeps the cable in place. Given the fact that the headphones last every bit of their claimed 20-hour battery runtime, you shouldn’t have to wire them up often.

One drawback of the Bluetooth functionality is that it is limited to one device at a time. Without multipoint support, it’s not possible to, say, listen to music on a tablet while taking calls from another phone. It’s inconvenient, though far from a deal breaker.

We weren’t surprised Focal maintained the same baseline sound from the wired version for the Listen’s wireless upgrade. And while the brand didn’t do much (if anything) to expand or enhance on that foundation, we liked the balanced sound of the prior model, and appreciated hearing that come through here as well.

Focal equalized the Listen Wireless to always default to a warmer soundstage, which pushes vocals and treble a little more. The company’s audiophile heritage no doubt contributed to this, as certain genres, like jazz, acoustic, classical, new age, and classic rock, are better tuned for it. We liked how bass generally sounded on the wired model, and though we didn’t have much to complain about. A slight tweak to punch the lows through more would have really helped balance things out.

One drawback of the Bluetooth functionality is that it is limited to one device at a time.

For example, Walk This Way by Aerosmith resonates well because of the warmth of the vocals and guitar riff, whereas a house track like Don’t Lie (Hot Sand Remix) by Loui and Scibi needs higher volume to bring out more of the bass. Lalah Hathaway’s live cover of Anita Baker’s Angel sounded quite good, while Work by Rihanna sounded different than what we’re used to hearing. Rihanna’s and Drake’s vocals really shone through, with the bass riff somewhat restrained.

Admittedly, we are nitpicking a bit. It’s just that we expected Focal might tweak the drivers inside to produce even better sound. Instead, we came away feeling like the Listen Wireless are, like their namesake, cord-free iterations of the exact same hardware. That said, there’s something to be said for a headphone brand being able to add all new hardware, including on-board amplification, and still maintain its signature sound.

We could hardly argue with the 20-hour battery life, living up to Focal’s claims. We played music for hours over several days before the headphones needed a refill. Plus, we could see where they stood on iOS devices.

Focal offers a two-year warranty for the Listen Wireless, as it did for the previous wired version, but dealers in each country handle the logistics.

Like its predecessor, the Focal Listen is aimed at listeners who want balance to accommodate their varied tastes in music. Those seeking to exclusively indulge in hip hop or electronica would be better off looking elsewhere. For that reason, these headphones won’t appeal to every user subset, but those looking for warm, detailed sound will feel right at home here.

Those looking for something with beefier bass – and a bit more style – may want to check out V-Moda’s Crossfade II Wireless.

Despite using plastic all over the Listen Wireless, Focal’s reputation isn’t tied to cheap builds. We expect these will still be pumping sound out for some time to come. The only caveat we could hone in on is the Bluetooth connection — always an underlying concern with any wireless cans — but we’ve got a good feeling about these ones. They do require regular maintenance just to wipe off the smudges and fingerprints on the black finish, along with the dust congregating on the rubberized buttons.

Yes. For the balanced sound they provide, they are a good buy for the more discerning ear. That’s especially true if you love genres like jazz, acoustic, and rock, which will be music to your ears when wearing them.