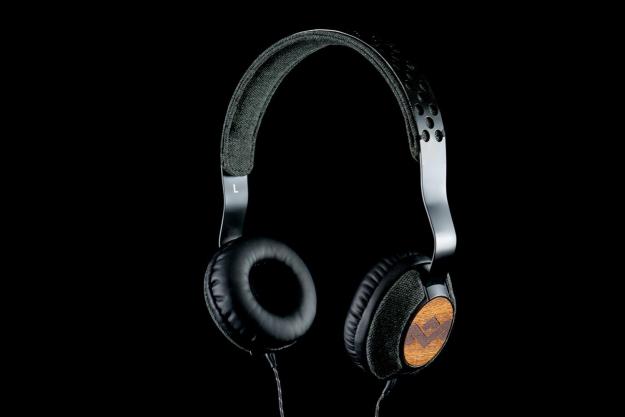 “If you can’t get enough of that thick, heavy low end - and don’t mind sacrificing clarity to get it - consider giving the Liberate a listen.”

House of Marley, formed in part by the family of the Reggae legend himself, is one of the more unique companies slinging celebrity headphones today. Crafting a wide array of models from eco-friendly core materials like hemp, recycled aluminum, and FSC-certified wood, the company offers solid gear with a dash of civic morality, even donating some of its profits to the Marley family’s OneLove charity.

… for our ears, the bad moments outweighed the good.

But the real essence of most HOM products comes from the “Marley signature sound” which can be translated loosely as a “hefty dose of bass.” With the exception of the Riddim, which we felt offered a pretty smooth balance throughout the sonic spectrum, Marley headphones are best known for hitting low and hard.

We recently received one of the newest members of the family, the Liberate on-ear headphones, which have been reduced from their $100 MSRP to $80. Wondering how much clarity the Liberate could glean from their “signature sound” at that modest price, we prepared for a heavy thumping and took them for a detailed test run.

In typical Marley form, the Liberate come in an inconspicuous brown box made of recycled cardboard, with nothing more inside than an earth-friendly clamshell of protective padding, an instruction manual, and, surprisingly at this price point, even a matching hemp tote bag. We may not be hippies, per say, but we are realists, and always appreciate the guilt-free packaging HOM provides.

Unveiling our review model revealed a slim layer of denim blue recycled fabric around the ear pads and at the underbelly of the headband. Unlike the Riddim, however, which looked like they were sewn together with cutouts from a farmer’s overalls, the Liberate are far less conspicuous, and actually have a pretty attractive exterior. The industrial steel frame felt extremely stout as we worked it over, and the wood caps on the ear pads were grainy to the touch, and oiled to a satisfying, light glow.

The Liberate feel well-built, with a stout chassis and rock-solid ear cups. The fabric pad on the underside of the perforated steel band is stitched on with black thread, lending a hand-made aesthetic. The cups move along the band for size adjustment with in a jerky motion, and don’t rotate vertically or horizontally, but the cushy vinyl pads offer a fair amount of support to allow the ‘phones to conform to the ears in relative comfort.

Beneath the ear pads lie 40mm dynamic drivers, covered with a surprisingly thick layer of padding across the screen at the center. A braided headphone cable extends from each of the two ear cups to meet at a three-button iOS control piece in the middle. We’re always happy for the volume and song control, but the piece did feel a little flimsy, and didn’t offer a microphone for fielding phone calls like most devices of its kind. Still, at this price point there’s not a lot of room for complaining about extras, and we were impressed to find a 90-degree angled gold plated jack at the far end of the cable.

We give the Liberate a passing grade here. The ear cup padding didn’t give as much as we’d like, but the thin denim strip along the band added just enough support, and the band didn’t chafe as we expected it might. We were able to wear the ‘phones for long periods without any notable issues.

Before we even get into the Liberate’s performance, we have to come clean and state that we simply don’t have much patience for overtly bass-heavy headphones. There, we said it. In our opinion, the only thing that calls for bass to be the star of the show is a Victor Wooten solo (plug in your favorite bass virtuoso there). That doesn’t mean we don’t enjoy big hits in hip-hop, reggae, and electronic music, but there must be balance.

That said, we know that there are plenty of listeners who love that big thump, and the Liberate certainly have that in full force. However, before we go there, we want to give some kudos to these little cans for their proficiency in other areas of the spectrum. For a headphone of this caliber, the Liberate do a great job with instrumental separation, offering some precision at the upper register, especially at the edges of the stereo image.

… we know that there are plenty of listeners who love that big thump, and the Liberate certainly have that in full force.

Select tracks with lighter studio mixes, especially acoustic productions, showed an aptitude for detail, with a golden glow that was especially pleasant. One of the best examples came from the Willie Nelson version of “The City of New Orleans,” in which the headphones displayed the wide collection of instruments in a diverse array of resonant colors. Bass was smooth and firm, snare had a thick thump, and although the ‘phones didn’t offer the vivid definition we get from hi-fi models, they provided a smooth blend across the spectrum.

We had a good time with several other selections as well, including a well struck rendition of Peter Gabriel’s “Shaking the Tree,” which was a little thick in the lower mids due to the electro bass line, but still cut the mass of percussion instruments, electric guitars, and chorused vocals with some competency and precision. However, the thump of the kick in that tune was a prime example of where the Liberate started to take a wrong turn for us. There seemed to be a certain mixing style that brought out the worst in the lower register, exuding a powerful cloud of low frequency sound that took precedence over the rest of the music.

The first song that really knocked us for a loop was Beck’s “Black Tambourine,” which was extremely heavy and bloated at the groove, and had us backing down the volume to restrained levels to get through it. Soon, we discovered a long list of songs in which a certain swath of low frequencies was so over emphasized, they masked much of the center image, and it was tough to focus on much else. There were even a few tunes that had a mix of both, only becoming overbearing at certain moments. A surprising example was Ben Folds’ “Effington” which plowed along with thick, pounding pressure from the bass in the verse, but lightened up into a more balanced orchestral mix at the chorus, brandishing presence and dimension from the percussion, fuzz guitar, and piano.

Still, for our ears, the bad moments outweighed the good. While the Liberate showed promise, we’d have to select a careful playlist to keep them on for long periods of time without getting thumped into a migraine.

House of Marley’s Liberate headphones are well constructed, affordable, and offer some moments of brilliance in the treble. But for us, when things got heavy down low, it was too much to handle. There simply wasn’t enough balance to keep the Liberate on our heads. With that said, we know our taste doesn’t match everyone else’s, and those that love the bump like Sir Mix-a-Lot likes “back” may find the Liberate deliver just what they’re looking for. If you can’t get enough of that thick, heavy bottom end – and you don’t mind sacrificing clarity to get it – add 1 to 1.5 points to our score and consider giving the Liberate a listen.