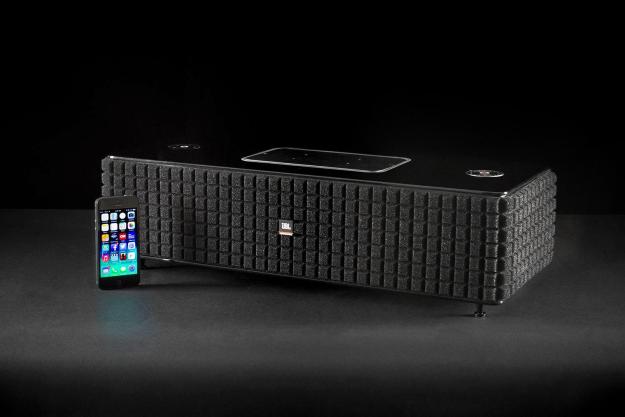 “The L8’s brilliant blend of vintage aesthetics, modern design, and well-crafted sound is a winning combination.”

JBL has its arms stretched into just about every corner of the audio industry. So when the company got into wireless speakers, we weren’t surprised to discover some impressive offerings from the stalwart brand. Portables like the Flip and Charge pack a mean punch at an affordable price, serving up some fierce competition in the crowded field.

With its new Authentic L8 and L16 speakers, however, JBL has boldly raised its wireless game to a new level. Crafted from solid wood, and dressed with accents plucked straight from the golden age of audio, these gorgeous cabinets blend a retro aesthetic with a modern backbone to bring beauty, brains, and brawn to your living room. And after spending some time with the smaller L8 ($540), we can tell you that this is one gamble that has definitely paid off.

One look at the L8’s gleaming piano-black lacquer finish, and you immediately know you’re dealing with a premium piece of gear. The speaker feels solid, if not curiously light, considering its impressively inert cabinet. The L8 features a succinct pair of silver-set controls along the top, including a digital volume dial encircling a power key on one side, and a source selector on the other.

Pleasing as the L8 is to the eye, we did notice a strange design point straight away. A cubby which hosts an optical input and the power port, as well as a master power switch is inconveniently buried at the bottom between the cabinet’s dual air ports. Fortunately, most users won’t have to spend much time there. As we pulled the power cable and quick start guide from the box we also noticed one other surprising design choice: there’s no remote control.

There are more ways to connect to the L8 than most users will know what to do with. Wireless connections include Bluetooth with NFC touch pairing, as well as Wi-Fi with Airplay support for iPhones, iPads and Mac computers, and DLNA support for both Android devices and PC/Macs. You can also plug in a TV or other component via the digital optical port. A slightly awkward panel on the top pops off to reveal a few more inputs including a 3.5mm Aux input, and dual USB ports for charging devices and setting up the Wi-Fi connection.

One look at the L8’s gleaming finish, and you know you’re dealing with a premium piece of gear.

The L8’s sexy wooden curves, and fuzzy foam speaker screen draw inspiration from a classic piece of JBL audio lore, the Century L100 loudspeaker. As such, the L8 comes in both the glossy black version we evaluated, and an ultra-retro wood grain veneer – we can’t decide which looks better, but we lean towards the wood grain. We also can’t decide whether we prefer the speaker with its speaker screen in place, or topless with its sleek drivers exposed.

Pulling the screen free reveals fairly chintzy plastic connection pegs – we much prefer magnetic connection, but that’s sort of nitpicking at this price. Under the hood are two gleaming white 4-inch full range drivers, flanked by a pair of high-frequency 1-inch tweeters behind plastic safeguards. The speaker pushes 30 watts of power to each driver, and also incorporates a suite of DSP, including JBL’s Clari-Fi system, which is designed to “rebuild” the lost information in compressed files like MP3s.

As mentioned before, we lament the lack of a remote for the system. It’s not a notable issue for wireless playback, and even with hardwired sources, volume can be controlled via JBL’s mobile app. However, it did force us to move our lazy bones to change sources or power the speaker on – perhaps it’s just JBL’s way of delivering a more tangible taste of the 70’s.

Basic control via the silver pads is a breeze. The center source key allows for easy switching to all of the inputs with familiar symbols to guide the way, apart from a TV symbol, which refers to the optical input. As for the volume dial, it’s illuminated with a circular backlit LED for level, and follows your mobile device or PC during wireless connection on a 40-point increment system.

Bluetooth pairing is a breeze, especially for those with NFC-compatible devices, which allows for one-touch pairing. For the rest of us – iOS users – holding down the source key with the Bluetooth symbol puts the speaker in pairing mode.

Connecting via Wi-Fi is more complicated. There are several methods, but we chose the wireless path with our iPhone 5, which requires downloading the JBL music app. From there, the app walked us through the process, which involved connecting our iPhone to the speaker via Bluetooth, and seeking out it out from our phone’s Wi-Fi settings. Once connected, the speaker asked to share wireless settings, and clicking ‘allow’ set it up for Airplay connection over our network.

Other methods include plugging directly into the speaker, or connecting to the device via DLNA through a wireless router.

We don’t know where JBL gets off providing so much power and presence from a single device with only four small drivers. What we do know is the Authentic L8 is one of the most impressive wireless speakers in its class that we’ve laid ears on. Whether listening over Wi-Fi, or Bluetooth, the speaker offered diamond-cut definition in the top end, a warm and smooth swath of power in the mids, and more bass than a speaker this size has any business handing out.

The L8 scratched nearly every itch we had while listening to our catalog.

We had plenty of favorite moments during our evaluation, but the apex came when we backed away from the speaker and let “Cream” by Prince roar. Even at a mere 75 percent on our iPhone, the L8 saturated the room with sound, with zero audible distortion. Prince’s vocals echoed with taught precision, spinning the slapback reverb in clean, potent bursts. Percussion was equally precise, and guitars ripped around the side channels with their strange, laser-like 80’s tone at a loud enough pitch to start a party.

The speaker was equally comfortable tackling subtler tunes and acoustic tracks. Exploring our catalog exposed a flurry of colors in the sound as the warm, expansive woofers crossed over to the lightning-quick tweeters above. While we sometimes wished for a tad more clarity in a rather dark midrange, it provided a nice contrast with the treble that we found almost synergetic. That translated to thick and pulpy snares and toms on tunes like Ray Lamontagne’s “I Still Care for You,” while cymbals and guitar attacks were spindly and tactile, tap dancing atop the ruddy underbelly.

We occasionally missed some presence in tracks like Depeche Mode’s “Halo” as the smooth punch of the percussion lost a bit of clarity at times in the more subtle dimensions of the effects – but we’ll take a smoother touch over a biting attack every time. And if there was any question of the L8’s ability to deliver when it comes to the finer details, the luscious timbre of Chris Teely’s mandolin on instrumental tracks like “The House of Tom Bombadil” laid the matter to rest.

In short, the L8 scratched nearly every itch we had while listening to our catalog, with enough power and presence to make all our favorite genres sing.

JBL’s L8 delivers a distinctive blend of power, presence, and versatility from a package that’s as pleasing to the ear as it is to the eye. While it’s a tad pricey for a speaker that can’t venture beyond a power source (no battery option), the L8’s brilliant blend of vintage aesthetics, modern design, and well-crafted sound make for a winning combination in a crowded field.

What is aptX? Cutting through the clutter of Qualcomm’s codecs
The best Dolby Atmos soundbars for 2022
Ultimate surround sound guide: DTS, Dolby Atmos, and more explained
Apple AirPlay 2: Here’s everything you need to know
You can get an Apple TV for $59 for Cyber Monday if you’re quick
Cyber Monday: This Samsung 85-inch TV just got a massive price cut
65-inch Sony OLED TV is $700 off for Cyber Monday, and it’s selling fast
Perfect for a bedroom or kitchen, this 32-inch TV is $108 for Cyber Monday
Get these Sony wireless noise-canceling headphones for $68 today
Walmart has a Bluetooth speaker for $39 in its Cyber Monday deals
Amazon’s superb Echo Studio speaker is just $155 for Cyber Monday
Save $1,000 on this 85-inch Sony Bravia 4K TV for Cyber Monday
Cyber Monday Deal: Samsung’s Freestyle Portable Projector is $300 off