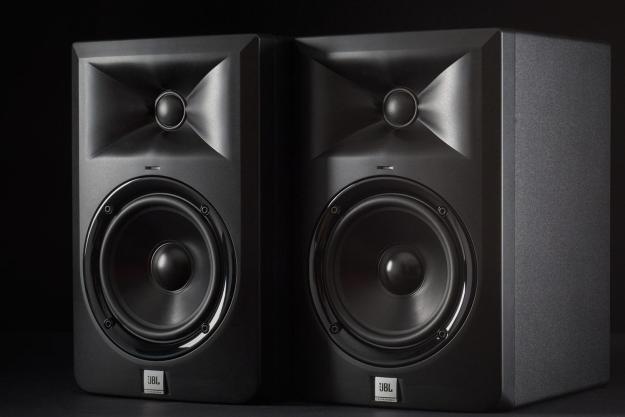 “JBL’s LSR305 are gorgeous pair of monitors that offer premium performance on a big-box store budget.”

When we first checked out the JBL LSR305 powered monitors a few months ago, we were thoroughly impressed by their amazing imaging and overall balance. However, we wondered if their unique sound stage would translate into something we’d want to listen to, or mix with, once we’d spent some more hands-on time with the speakers.

So as not to keep you in suspense we’ll just go ahead and tell you: the answer is an emphatic yes. JBL has managed to squeeze an impressive amount of value and performance into these speakers. Although they don’t do wireless streaming and require a different approach to set-up than your average shelf speakers, at $265, they could make for an enticing addition to your home studio, or your living room.

The LSR305 are exceptionally good looking speakers, especially for their price point. Pulling them from their foam enclosure’s revealed sleek lines of jet black plastic, glossy circles around the drivers, and what we’ve described as batman-esque points surrounding the tweeters.

Laying the monitors on our counter top, we discovered just the right amount of connection points and controls at the back to offer great functionality, but without a whole lot of complexity. In other words, these speakers are easy to use, but offer just enough control options to keep audio geeks happy. Those include trim control for the high and low frequencies, and individual volume pots with fixed points to easily match the output levels between the pair.

Inside the box we found an austere selection of accessories, including stick-on pads for the base of the speakers and removable power cables.

Though the LSR305 may look like your everyday studio monitors at first, a closer look at the rounded points around the tweeters make them look like they’re buckling in on themselves – in a good way. The breakthrough design is key to JBL’s Image Control Waveguide (ICW) technology, which claims to break up audio frequencies for an expansive center image from nearly any listening position, while still allowing for accuracy throughout the soundstage. And to our surprise, it works nearly as well as the hype would suggest.

The LSR305 are exceptionally good looking speakers, especially for their price point.

ICW technology was leveraged from JBL’s super high-end flagship series, the $26,000+ M2 Master Monitors – just one of the benefits of having the resources of a company as big as JBL. And because it’s a physical manifestation rather than, say, digital circuitry, JBL was able to easily add it to these affordable speakers, helping to separate the LSR305 from other entry-level studio monitors.

The LSR305’s have a few other design tricks up their sleeves, as well. Those include JBL’s SlipStream low frequency port design, which uses a double-flared design to work with the woofer for “greater low-frequency extension,” as well JBL’s Linear Spatial Reference technology (LSR) which is claimed to employ 72 axis measurements to make the performance of the speakers fit for nearly any sound space.

Source connections include XLR and ¼-inch balanced inputs, which accept consumer level -10 dB signals, as well as professional +4 dB signals. That allows users to drive them with a variety of sources, from an iPhone to a professional DAC. However, the speakers’ self-amplification excludes the use of standard home theater amplifiers or receivers. As mentioned, trim switches allow for control of the high and low frequencies, offering +/- 2 dB EQ for each. We ended up switching the HF to -2 dB to roll off a bit of bite in the treble.

Each monitor’s five-inch long throw woofer and one-inch soft-dome tweeter are powered by 41 watts of Class D amplification. JBL claims a frequency response of 43Hz-24kHz, which offers more than enough extension in the high end, but those looking for a bigger punch down below will likely need to add a subwoofer to the equation – not unexpected for 5-inch monitors.

We set up our LSR305’s by connecting XLR cables between the pre-amplifier output of our Oppo HA-1 amplifier/DAC, and the speakers’ inputs, with the input connection set to +4dB for professional-level signal. We then connected a variety of sources, including our iPhone 5 and Macbook pro.

Users without a proper preamplifier can connect in a variety of ways. When we first auditioned the speakers, they were simply connected to the headphone output of a Macbook pro with a stereo RCA cable, and quarter-inch adaptors. In such a configuration, you’ll likely want to switch the inputs to accept -10 dB consumer-grade signals. You can then adjust the volume on the back of the speakers to the desired level (we recommend about ½ – ¾ volume), and then control the incoming levels from your source device.

After our initial experience with the JBL LSR305s, we had this to say about the stereo image: “Panned instruments stayed put, but the center image seemed to follow us into the periphery like a laser beam. Moving all the way right or left, vocals still sounded dead on, as if the speaker were mono, yet we could also delineate the stereo panning.”

That all remained true during our deeper evaluation. However, staying put in a standard listening position, the roving center image was no longer the star of the show. Instead, the entire soundstage took honors.

Instruments were beautifully crafted, revealed in glossy, yet well-defined bursts.

Whether it was due to the ICW technology or not, the vividly defined stereo image of the LSR305 was nothing short of dazzling – especially considering the price. The speakers seemed to carve out a deep three dimensional image before us, with clearly identifiable points of origin for each sound, sparkling like an expanse of celestial bodies. One of the most striking examples came during our audition of the track “Undisclosed Desires,” from Muse’s Resistance album. Pushing forth from the cacophony of synths, guitar and percussion, the little background echoes of the vocals seemed to pop out at us, giving the impression they were right outside our ears.

Instruments were beautifully crafted as well, revealed in glossy, yet well-defined bursts. Acoustic instruments like picked guitars, violin, and mandolin were some of our favorites, blooming forth in superbly defined colors that allowed us to distinguish each part, even when stacked closely together in the mix. Percussion, too, was superbly cut, especially lighter instrumentation like shakers and hand drums. While the speakers certainly didn’t cut to the core of the instrumental textures like our home monitors, JBL’s LSR4326, we paid about three times the price for that luxury.

As impressed as we were with the LSR305, they still had room for improvement. Most notably, we wished the midrange had more punch at times. While there’s more bass here than you’d expect for their size, the airy touch up top resulted in a lack of body in instruments like heavy electric guitar, and snare drum, which never popped with the excitement we wanted.

Still, for a set of speakers that barely rise above the $250 price point, that’s pretty nitpicky. And beyond a few quibbles, we don’t mind admitting that the LSR305 met or exceeded our expectations at nearly every turn.

Whether you’re a DJ, a budding sound engineer, or just a music lover, JBL’s LSR305 are gorgeous pair of monitors that offer premium performance on a big-box store budget. While there’s plenty of hype around their waveguide technology, we think it’s mostly well-founded. And beyond the acronyms, there’s just a lot of well-crafted sound happening here. Feel free to tell your friends you paid more for these babies, they’ll believe it.