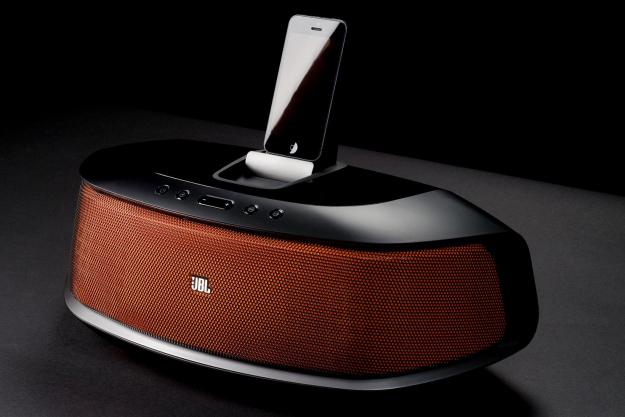 “The OnBeat Rumble delivers a wonderfully powerful sound with some of the best bass we’ve heard from a speaker in its class.”

When it comes to speaker docks, we’ve seen just about every style you can think of – from bass blasting boxes like the iNuke Boom Jr., to innovative designs that stretch the imagination (and the wallet) like the Zeppelin Air. JBL’s new Lightning-ready Bluetooth speaker, the OnBeat Rumble, seems to rest somewhere in the middle of the two. At $400, the dock pushes the envelope of what the average consumer is willing to pay for a homebound secondary sound solution. And with a name like Rumble, we wondered what kind of sonic limitations the black and orange sound machine might exhibit. But, as we’ve discovered, you never know what a dock will deliver until you fire it up and let your smartphone sing. Here’s what happened when we did just that.

Staring at the Rumble’s front face, you almost get the feeling it’s smiling at you.

The Rumble is a relatively heavy device, with a black and grey finish, and a large, wraparound speaker screen across the front in basketball orange. First impressions showed some promising design features, like dual sound ports at the rear, and a rubberized bottom to help minimize unwanted resonance. However, we must admit that the Rumble’s plastic frame seems slightly flimsy, and its humdrum exterior components struck us as a bit out of step with other devices we’ve tested in its class (including the highly impressive OnBeat Extreme). Our hope was that its sonic performance would atone for its pseudo-budget aesthetic.

Staring at the Rumble’s front face, you almost get the feeling it’s smiling at you. The wide front screen hugs the dock’s curved exterior like an orange mouthguard with a chrome JBL logo planted at the center for a touch of bling. Above the screen rests a small selection of glossy plastic buttons that control functions like power, Bluetooth pairing, and volume. Onboard additions to those basic controls include a bass boost button and a “Club” button, which activates the only available EQ preset that is functional outside of the Rumble’s Musicflow app for mobile devices (more on that later). Above the control set is a familiar rounded panel which, when pressed, pops up to reveal the iOS Lightning-equipped docking station.

Underneath the orange speaker screen rests the Rumble’s main speakers, consisting of a pair of 2.5 inch dynamic drivers. Picking up the dock and examining its underbelly reveals the source of the promised “Rumble” – a 4.5-inch, down-firing subwoofer, exposed through a hexagonal plastic speaker screen. A heavy layer of orange rubberized padding encircles the sub, providing the aforementioned decoupling to prevent unwanted vibrations.

At the back of the dock, set in between the sound ports, is a small input panel which houses the power supply input, a 3.5 mm aux input, a USB charging port, and a headphone output. The instruction manual suggests the headset output is designed for previewing mixes while using the Rumble with a DJ app. That sounds like a pretty cool option – especially if you’re a speaker-dock DJ looking to party. Take note, though, that the input is inactive while your iOS device is docked.

JBL’s Musicflow App is a thoughtful addition, but we found few reasons to use it rather than stick to the much more intuitive standard iTunes app. The main incentive to use the Musicflow interface is its EQ preset selection. However, none of the presets sounded nearly as good to our ears as the default “Basic” preset. The Movie and Club presets do a good job of expanding the sound in a wider stereo image, but they tended to add an unwanted boost to the treble around the 5-7 kHz frequencies, right where vocal sibilance is at its most troubling. In fact, as far as we could decipher, all of the presets added more bite to the treble, which was sizzle-y to begin with. Aside from that, the Musicflow app’s interface can’t compete with iTunes, so we stuck with that for our testing.

One surprising omission is a remote control. As long as we were connected via Bluetooth, we had full control over the unit with our iPhone, even when it was powered down. But after a short period in standby, the connection was lost, requiring us to actually leave our seat (the nerve!) and power the unit back on, as well as reconnect Bluetooth from the preferences menu. It’s not a huge deal, but it is worth mentioning given the fact that almost every other device we’ve tested at this level includes some sort of remote.

After a short period of listening, it became clear that the name of the device and the telltale signs on its exterior (like a “Club” button providing the only available onboard EQ adjustment) were definitely indicative of the focal point of the Rumble’s sound signature. For a device its size, the speaker is equipped with an impressive amount of rich, powerful, good ole fashioned swagger in the low end. Hip-hop, Dub, and EDM was delivered with warmth and force, unleashing barrels of earth-rattling wavelengths that commanded our attention. Though the 4.5-inch sub was cut short somewhere just beneath the 60 Hz line (the specs say it reaches 50 Hz), it still did an ample job of pouring it on without creating unwanted buzz or distortion, thanks to the Rumble’s solid design.

JBL’s Musicflow App is a thoughtful addition, but we found few reasons to use it…

When it came to other genres, however, we were a less impressed. The smaller drivers in charge of delivering the meat of the midrange and treble did so with a surprisingly frosty hand, offsetting the thump of the bass and low mids with a sharp touch that could come off as uninviting. Though we never heard an instance in which the treble was overtly piercing or sharp, there was a consistent cutting edge to the music, especially present in more organic instrumentation, which got under our skin.

The Rumble was at its best with straight-ahead rock tracks and powerful electronic-based productions. The speaker has decent stereo separation and an impressive amount of head-on velocity that easily fills a room. Some of our favorite moments came listening to Pearl Jam’s eponymous album, especially the track “Come Back.” Eddie Vedder’s deep baritone vocals tended to ease up the sizzle in the mids while thick snare and kick drums provided some nice excitement under the ripping guitars. Bass lines got a bit overpowering at times, but never seemed to completely monopolize the sound. That said, the timbre of electric guitar was never quite revealed to our satisfaction, sounding a bit dull and glossed over.

In other genres, however, the speaker increasingly revealed its arctic tendencies in the upper register. Acoustic guitars seemed to cut at the attack like the twang of a bow, and piano was bright, and lacking body on most of our test tracks. Snare and toms were inconsistent, ranging from moderately thick, to boxy and pale, depending on the production.

As we listened on, we continued to wish for more from the texture of the instrumentation. A seminal moment for us came when we auditioned Radiohead’s “Little by Little.” The richly drawn cacophony of percussion at the breakdown that is usually so present and defined seemed to have lost a massive amount of depth, sounding almost like a collection of cheap jewelry being rattled together. To be clear, we were never totally put off by the Rumble’s sound, but we expected higher resolution in the midrange and treble from a speaker at the $400 price point.

JBL’s OnBeat Rumble delivered some of the deepest, most potent bass we’ve heard from a wireless speaker dock. It provides a clean and consistent Bluetooth connection, and a powerful sound that is sure to impress from the background of a party or at your next barbecue. However, we expect a lot from a $400 dock, and with the top end not delivering the goods once we turned a critical ear, it prevents the OnBeat Rumble from being classified as a slam-dunk speaker for pickier listeners. For our money, we’d prefer the much more balanced sound of the Bowers and Wilkins Z2 Airdock, or the potent little Klipsch Gallery G17 Air. That being said, if big, beautiful bass is what you crave, we think you’ll want to give JBL’s OnBeat Rumble a whirl.