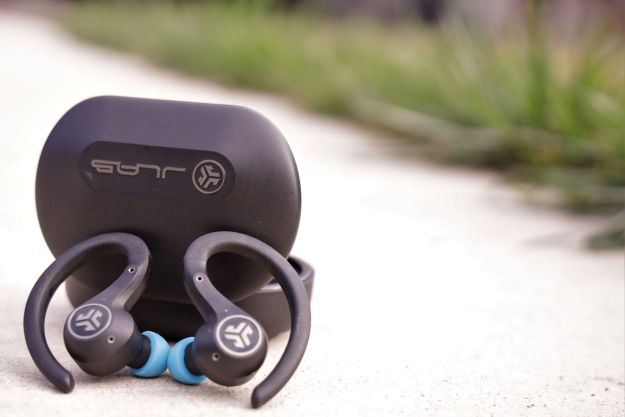 “The Epic Air Sport ANC are a game-changer for workout earbuds.”

Just days ago, we released our glowing review of the JLab Audio Epic Air ANC, which are quite possibly the best true wireless earbuds value available today. Or at least they were, because JLab’s fitness alternative to its excellent new lifestyle buds is here, and the $100 Epic Air Sport ANC may have raised an already sky-high bar even further.

Like most products I’ve tested from the JLab family, the packaging of the Epic Air Sport ANC is incredibly straightforward. Besides the charging case holding the earbuds themselves, there are five extra pairs of eartips and a quick start guide that’s neatly tucked into a built-in sleeve in the box. There’s notably no included charging cable since it’s already incorporated into the charging case itself.

Setup was easy, as most modern true wireless earbuds have proven to be. There are plastic stickers on each earbud that need to be removed before using them, but from there, it’s just a matter of holding each bud’s touchpad for three seconds to enter Bluetooth pairing mode, then finding them via your mobile device’s settings and making the connection. Granted, it’s a step or two more than the simplest of earbuds, but it’s still a quick process to start listening with your new buds.

With Bluetooth 5 technology, I experienced exceptional connectivity and range with the Epic Air Sport ANC. I routinely left my phone in one part of my house and freely walked about my living space doing household chores without so much as a blip or dropout.

Look, it’s hard to knock a design that just works. And the Epic Air Sport ANC’s earhook style works. It is near-universally regarded as the less popular design compared to the simple earplug style of traditional true wireless buds, like the Epic Air ANC, and it brings with it extra heft (10 grams per bud compared to the Epic Air’s 8). But once you secure those hooks around your ears, they stay  in place. More than a week of extensive cardio workouts and gym sessions has shown that. They may be less attractive, but they are the superior design if keeping the buds in place is of utmost importance, like it is during workouts.

The included eartips create a solid seal in your ear, though like fellow Digital Trends expert Simon Cohen, I recommend the Cloud Foam tips for their soft, comfy feel in my ears. They aren’t for everyone, of course, which is why there are five other pairs to choose from, but the Cloud Foam works the best for me and does a terrific job of passively blocking out sound.

The touch controls on each earbud rely on a multitouch system, and I’ve certainly had my share of complaints with poorly executed touch controls in the past. However, while there was a small handful of instances where the Epic Air Sport ANC didn’t recognize the correct number of touches, they were impressively responsive for the most part. With these controls, you can manage everything including volume, track changing, smart assistant activation, equalizer settings, active noise cancellation levels, and phone call controls. For $100, that’s quite a lot of controls for a pair of earbuds — and they’re all effective.

The charging case isn’t much to write home about, by the way. It’s larger than, say, the cases for the Apple AirPods or Google Pixel Buds 2, which are widely considered to be perfectly pocketable earbuds cases. The Epic Air Sport ANC fit just fine in my pocket, though it left considerably less room for a wallet or keys. Those aren’t typically things you’re carrying around at the gym or out on a run, so I wouldn’t really call this an issue.

The value of the Epic Air Sport ANC is planted firmly in the features. Nearly everything these buds offer pushes the boundaries of what we previously thought was possible in this price range. Honestly, if we were to judge things exclusively by features, it’s not fair for other buds to have to try and compete when the Epic Air Sport ANC are this good for this cheap.

First, battery life: The Epic Air Sport ANC are rated for 15 hours of battery life per charge without ANC, plus an extra 55 hours of life (!) in the charging case. With ANC on, playback time drops to 11 hours. They also have a quick-charge feature that nets you an hour of playback after 15 minutes in the case. Comparatively, the Epic Air ANC have eight hours with ANC on and 12 with it off. The $200 Sony WF-SP800N are the only other buds capable of competing in this category, but even these buds don’t stack up with just nine hours of ANC playback and 13 hours of regular listening — and they ask for double the price.

It’s not fair for other buds to have to try and compete when the Epic Air Sport ANC are this good for this cheap.

The Epic Air Sport ANC have an IP66 weather-resistance rating, which gives you complete protection against dust and powerful jets of water. There are workout buds with better ratings out there, like the $120 Urbanista Athens’ IP67 rating or the $80 Anker Soundcore Spirit X2’s IP68 rating. But neither of those buds can match the Epic Air Sport ANC’s, well, epic combination of battery life and weather resistance.

A far less miraculous, though still appreciated, feature is the Epic Air Sport ANC’s wear detection sensor that automatically pauses a track when a bud is removed from your ear, and resumes said track once you fit the bud back in. I thoroughly despise losing entire minutes of podcasts to earbuds that lack this feature, so believe me when I say I’m personally ecstatic these come equipped with such a handy perk.

I may be in the minority here, but I’m more enamored with the customization possibilities of the Epic Air Sport ANC’s sound than their initial audio quality. Don’t get me wrong, the Epic Air Sport ANC sound good out of the box, and most folks won’t have to fiddle with sound adjustments at all to get something that works well for them. But for those of us that can’t help but tinker, JLab gave us all the tools we might need.

With the buds’ touch controls, you can switch between three preset EQ’s: Balanced, bass boost, and JLab Signature Sound. Your taste may differ, but I tended to use bass boost for my weight-lifting playlists, allowing me to get the most out of low-end saturated songs like Childish Gambino’s 3005 or Kris Kross’ Jump. When I was out for a walk with the dogs or an afternoon run, I opted for the signature sound, since it presented a less dynamic but more balanced profile that catered to music outside of the iron-pumping genre.

Even if you don’t like the stock sound of the Epic Air Sport ANC, chances are you’ll be able to get to a favorable sound if you play with the settings long enough.

JLab takes the custom capabilities a few steps further with the JLab Air ANC App, which provides you with the ability to dig directly into the frequency range and tune things to your ears’ liking. That, plus a movie mode option that helps sync up dialogue when watching clips on your mobile device, makes these buds friendly to a host of listening situations. Even if you don’t like the stock sound of the Epic Air Sport ANC, chances are you’ll be able to get to a favorable sound if you play with the settings long enough.

Disappointingly, call quality is average with these fitness buds. The Epic Air Sport ANC have one mic dedicated to eliminating surrounding noise, and another for picking up your own voice clearly. It’s hard to tell which one is the bottleneck, but my voice got squashed when having phone conversations in louder environments. They were fine for evenings at the emoty gym or quiet morning walks at the park, but on a sidewalk near a busy street, it was an entirely different experience.

Something tells me the interference I grappled with during calls may have something to do with the active noise cancellation featured in the Epic Air Sport ANC, or frankly the poor execution of it. If there’s an Achilles’ heel hiding within the Epic Air Sport ANC, this is it. Although we never really expected good ANC at this price range in the first place — at least, not until the Edifier TWS NB2 came along — we still expect better when a company advertises it as a feature.

As I mentioned before, the Epic Air Sport ANC do create a tight seal in your ear, which makes for quality passive noise cancellation. When you opt to turn active noise cancellation on, though, it’s truthfully hard to notice a significant difference. In fact, one morning as I was listening to a podcast at low volume, I could still clearly hear my cat chewing on her breakfast across the room even after I turned ANC on.

The app lets you adjust noise cancellation levels, and I’d advise keeping ANC cranked to its maximum setting to get the most out of what’s essentially an average at best, but mostly mediocre, feature. On the flip side, the Epic Air Sport ANC’s ambient aware setting has some powerful functionality to it, so much so that it almost startled me the first time I turned it on while seated on an exercise bike at the gym. As opposed to the ANC levels, I’d suggest dampening the ambient sound levels just a bit.

The Epic Air Sport ANC’s industry-leading battery life at an affordable price should be enough to hook most athletes.

Average call quality and noise cancellation won’t stop what’s otherwise a game-changer not just for workout earbuds, but for the genre of true wireless earbuds in general. Earhooks may not be the “in” look, but the Epic Air Sport ANC’s industry-leading battery life at an affordable price should be enough to hook most athletes.

The $120 Urbanista Athens were one of my favorite new workout pairs, but the Epic Air Sport ANC have better battery and similar weather protection for $20 less. The Anker Soundcore Spirit X2 are probably the best new comparison to the Epic Air Sport ANC, since they too boast impressive features for just $80. But the latest from JLab outshine the Spirit X2 in most ways for not much more.

The Epic Air Sport ANC have a two-year warranty and outstanding protection against the unforgiving elements of nature. I’d try to avoid deep-sea diving with these on, but outside of that, I don’t think you should have any major concerns about the Epic Air Sport ANC failing anytime soon.

Yes. The earhooks, middling call quality, and average noise cancellation will deter some, but don’t let them distract you from what is an overall outstanding audio product. The Epic Air Sport ANC, alongside the Epic Air ANC, are revolutionary earbuds from JLab. Based on the kinds of features you get for how little they cost, trust me when I say this: You won’t want to miss out on the latest and greatest from one of the true wireless world’s rising brands.