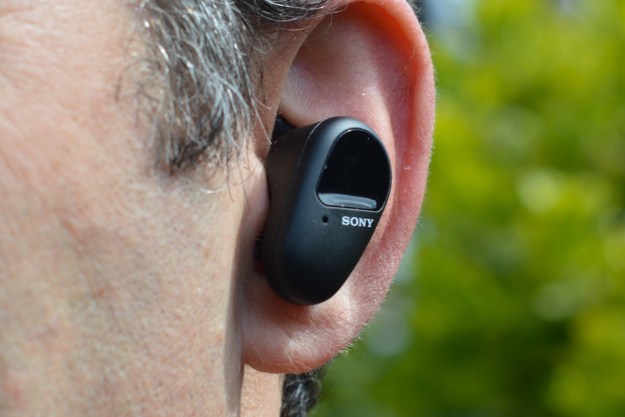 “Like an elite athlete, Sony's WF-SP800N earbuds excel at everything they do.”

If you’ve spent any time looking at our roundup of the best true wireless earbuds over the last year, you know we think the world of Sony’s WF-1000XM3. They excel in so many areas, like noise cancellation, sound quality, and call quality, that you have to dig pretty deep to find any flaws.

However, we were much less impressed with Sony’s last attempt at making a set of true wireless earbuds for the athletic crowd, the WF-SP700N. Lousy battery life was our chief criticism, and the active noise cancellation didn’t wow us.

Sony’s follow-up, the $200 WF-SP800N, are a different story entirely. They’re now a bit pricier, but Sony appears to have applied all of the lessons it learned from the WF-1000XM3 to bring the SP800N up to par.

Classic design with a twist

The WF-SP800N follow the same general design that Sony has used for all of its earbuds — they have a slightly elongated body that protrudes from the ear. Gone is the odd lima bean shape of the WF-SP700N, but these are still bulkier than most of today’s much smaller earbuds. They’re also surprisingly heavy. At 9.5 grams, they’re 1 gram heavier than the XM3, and almost twice as heavy as Jabra’s Elite 75t, which weigh 5.5 grams.

Not that they feel heavy — in fact, the addition of a silicone earfin helps them stay comfortably anchored. However, when pounding the pavement, you’re definitely aware of them.

To get that earfin in the right position to do its job, you need to perform a double-twist motion as you insert them: One twist backward to pop the earfin into your ear, then one twist forward to lock it into place. This pitches the earbud ends downward — a different angle than you see with the XM3.

The combination of the SP800N’s large overall size and integrated earfins means its charging case is also on the big side. It’s smaller than the case for the Powerbeats Pro and the WF-1000XM3, and way smaller than the chunky case that came with the SP700N, but compared to the Jabra Elite 75t — a model I used throughout my review of the SP800N — it’s a lot bigger and not what I would describe as pocket-friendly. In the image above, the blue case is actually that of the Jabra Elite Active 75t, but it is identical to the Elite 75t’s case.

If the SP700N were underwhelming on battery life, the SP800N have been clearly designed to overwhelm: They pack an impressive nine hours of battery life with their ANC function turned on and an enormous 13 hours when it’s turned off. That’s three more ANC hours and five more non-ANC hours than the WF-1000XM3. I wasn’t able to confirm these stats during my brief time with the earbuds, but Sony’s claims are usually in line with real-world results.

Only one other model of true wireless earbuds can beat their non-ANC 13-hour performance.

At nine hours with ANC, they come in just one hour shy of Master and Dynamic’s MW07 Plus, but the non-ANC 13-hour performance smashes almost every other true wireless earbuds we’ve seen. The one exception being JVC’s HA-XC90T at an insane 15 hours.

The charging case only holds a single charge, which is something of a surprise given its physical size. But you can’t argue with the total wire-free time of 26 hours if you need it. For a quick top-up, 10 minutes of quick charging gives up to 60 minutes of music playback, according to Sony.

Sony can take a lot of credit for the popularity of active noise cancellation on true wireless earbuds — it’s done more to promote the feature than any other company.

The SP800N don’t get Sony’s top-of-the-line ANC tech, the proprietary QN1e ANC chip that sits inside the WF-1000XM3, and Sony won’t say which ANC tech the SP800N uses. But we know this: It works very nicely.

Reviewing a feature like ANC during a pandemic means I can’t offer much of an opinion on how it performs on a flight, but using a combination of bathroom fans and vacuum cleaners as a substitute, I can safely say the SP800N should have no problem with the white noise of an airplane cabin.

Sony won’t say which technology runs the noise canceling on the SP800N, but we know this: It works very nicely.

Outside is a different story. When using ANC while walking and jogging, I found that even the slightest breeze was causing unwanted noise as the external mics mistakenly tried to compensate for a sound that wasn’t really there.

It’s not a big deal, though. The earbuds deliver superb passive sound isolation thanks to the tight seal provided by the eartips, meaning you likely won’t feel the need to engage ANC while outdoors.

Despite the wind-related struggles of their ANC, the SP800N have impressive call quality. I’ve put a lot of true wireless earbuds through the phone call test, and these are the first ones my callers described as sounding like I was using my phone — high praise given that most earbuds force you to compromise on the clarity you get when holding your phone to your ear.

The wind was occasionally noticeable, as were passing cars, but the overall experience was excellent.

I did experience one instance where the earbuds lost their connection with my phone during a call, but that seems to have been an isolated event. Wireless connectivity is generally excellent with the SP800N.

One of the benefits of using Sony’s wireless headphones and true wireless earbuds is the company’s Headphones Connect app, which lets you tweak a variety of settings including EQ. Unfortunately, the app wasn’t ready to work with the SP800N during my review period, so I had to make do with Sony’s factory sound settings. And I couldn’t have been happier.

If you like your workouts to be accompanied by a driving, bass-forward beat, you will love the SP800N.

Right out of the box, the SP800N sound amazing. Tones are warm and rich, and the lows, midrange, and highs are well-defined, letting vocals stay crisp and clear. The soundstage is both wide and deep, something that lesser earbuds simply can’t reproduce. And then there’s the bass. It’s deeply resonant and provides an impressive level of immersion for bass-heavy tracks, yet it stops just shy of being overpowering. If you like your workouts to be accompanied by a driving, bass-forward beat, you will love the SP800N.

If big bass is not to your liking, you can adjust EQ inside the Headphones Connect app, but I wasn’t able to test this.

As with Sony’s XM3, all controls are handled via touch-sensitive areas on the earbuds. They’re very accurate, so inadvertent taps are rare, but only the top half of the earbud can be used. This means you’ll need to get used to finding the specific areas with your finger instead of just tapping anywhere on the outside of the earbud. I personally prefer the physical buttons of the Jabra Elite 75t, but the SP800N’s controls work just fine.

By default, you get play/pause, track skip, call answer/end, voice assistant access, and ANC mode, but these can be changed inside the Headphones Connect app. If you want volume control, you can have it, but you’ll need to decide which of the other functions you want to swap out for it.

One of those options includes the ability to trade your phone’s assistant for Google Assistant or Amazon Alexa. You can’t use their wake-words to summon them, but the WF-SP800N are one of the few true wireless earbuds that provide this kind of flexibility.

If there’s one thing I’d change, it’s having greater control over these choices. Sony makes you pick from control themes e.g. Volume or ANC, and you can’t mix and match on the same earbud. You also can’t adjust which functions are assigned to which gestures — something that Jabra offers on its Elite line.

Like many premium true wireless earbuds, the SP800N have wear sensors that automatically pause your music when you remove an earbud. This can be disabled inside the app if you wish.

For $30 less than Sony’s superb WF-1000XM3, the $200 WF-SP800N deliver everything you could ask for in a set of true wireless earbuds, including excellent sound, decent ANC, enormous battery life, and the full protection of an IP55 water-resistance rating. A slightly bulky charging case that doesn’t do wireless charging is one of its few drawbacks, but I suspect that won’t be a dealbreaker for many.

If workout earbuds are what you seek,  Jabra’s $200 Elite Active 75t are an excellent alternative. They can’t match the SP800N’s battery life and their ANC isn’t as effective, but they’re super comfortable, offer more protection from water, and you can customize them endlessly using the Jabra app.

The best bet for folks who want the SP800N’s formidable set of workout-friendly options, but at a lower price, is the $150 JBL Reflect Mini NC. They can’t match Sony’s sound, ANC, or battery life, but they’re a good value for the price.

As with most Sony products, the WF-SP800N come with a one-year warranty. But that’s probably not an indicator of the earbuds’ life span. They’re very well-built and with an IP55 rating, there’s very little you can throw at them that they won’t survive. Treat them well and keep them in the charging case when not in use and they should last you many years of regular use.

Absolutely. The WF-SP800N are more versatile and capable than many premium earbuds, and you’ll be hard-pressed to find a better workout companion.

The sorcerer and its evolution in movies

There could be a brand new meteor shower visible on Monday

Save up to $450 in the Saatva Memorial Day Mattress Sale

The most common Roku problems and how to fix them

Chromebook Memorial Day Sale: Get a new laptop for $98

Where to find the best Memorial Day electronics sales in 2022

Two galaxies captured by Hubble are a hotbed of star formation