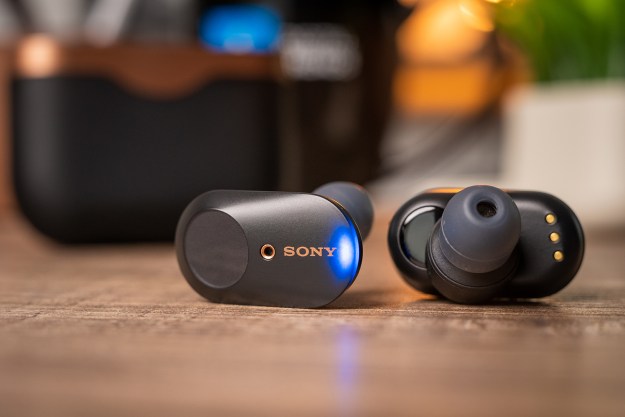 “The WF-1000XM3 are a groundbreaking pair of fully wireless earbuds.”

Editor’s note: Sony still sells these fantastic earbuds (now at a lower price) but it has also launched the newer WF-1000XM4, which add several new features while improving on noise cancellation and transparency.

For years, we’ve considered Sony one of our favorite headphone makers in the game, with its noise-canceling WH-1000XM4 (and their three predecessors) perennially topping our list of the best headphones and earning Digital Trends’ Editor’s Choice honors.

So when Sony released its true wireless earbud version, the WF-1000XM3, in 2019, we weren’t surprised at all when they wowed us by offering substantial noise-canceling, great fidelity, and the same great app-based features we have enjoyed from the company for years.

But in the time since their debut, some strong contenders have emerged. Apple’s AirPods Pro made their own splashy launch, as did the Google Pixel Buds 2 and Sennheiser Momentum True Wireless 2. We still think very highly of the WF-1000XM3, but these competitors have proven that Sony’s accomplishments are no longer unique.

The WF-1000XM3’s name confusingly bears an “M3,” or Mark 3, to match the uber-popular over-ear WH-1000XM3 (which have since been superseded by the even better WH-1000XM4), even though these are only Sony’s second edition in this specific line of true wireless earbuds. The new buds come in a slick black-and-copper charging case with a flat top embossed with the Sony logo.

That USB-C-powered case is substantial in size, but can still fit in most pockets, and the flat top allows you to easily lay it topside-down on surfaces when you’ve got the buds in. The cap flips up to reveal the two earbuds inside, and a big red LED on the front of the case lets you see if they’re charging.

Aesthetically, these buds aren’t much to write home about. That’s likely a purposeful choice by the Sony team — given that many buyers of noise-canceling headphones are commuters and businesspeople, it makes sense the company would stick to a tried-and-true design, with simple, pill-shaped housings and a black-and-gray color scheme with small copper accents. They’re bulkier than the AirPods Pro, yet also understated compared to Apple’s iconic white golf tees.

If you’ve been in the working world for some time, the look will be familiar: The earbuds resemble miniature versions of the Bluetooth headset you might have worn around town in 2006, with the oval-shaped shell joining an ergonomic inner section with rounded acoustic chambers that culminate in soft silicone eartips. Sony includes two different tip thicknesses in three sizes (small, medium, and large), all but guaranteeing you’ll find a pair that’s right for you.

There are very few wireless earbuds that compete with the Sony WF-1000XM3 in terms of features. For starters, the headphones boast a solid eight hours of battery life per charge with noise-canceling off, and a still AirPods Pro-besting six hours with it on. The case also has plenty of juice, offering three full charges for 18 hours of backup battery if you’re using the headphones with noise-canceling on, and 24 hours with it off.

There’s also a quick-charge feature that will get you 90 minutes of playback in just 10 minutes – great for those who are forgetful about recharging before commutes or short flights. A newer pair of Sony earbuds, the WF-SP800N, does have the XM3 beat in the battery department. The SP800N boasts nine hours of playback with ANC on and a massive 13 hours with it off.

A glossy touchpad on each bud’s exterior allows you to play and pause music, access your voice assistant, and change songs. Sony has also packed in some other nifty extras, including the ability to long-touch the left earbud to temporarily pipe in sound from the outside world, so you won’t have to remove a headphone while you’re trying to hear announcements or make a drink order on a plane.

Speaking of removing your earbuds, like the AirPods Pro, the WF-1000XM3 have sensors that pause music and eventually go to sleep when you remove them. Pop them back in and they’ll resume playback or turn on and reconnect, depending on how long you’ve left them unused.

These headphones have a staggering amount of noise reduction for their size.

In terms of their marquee feature, noise-canceling, Sony has packed the tiny buds with its QN1e noise-canceling chip (the same one inside its popular over-ear noise cancelers) and placed two microphones on each earbud to help block out the outside world. That processing works like an absolute charm, easily drowning out keyboard clicks, public transit noise, and loud in-office conversations.

You won’t get the same insane reduction you’ll hear on the bigger WH-1000xM3 over-ears, but these headphones have a staggering amount of reduction for their size. Coupled with the fact that they offer excellent passive noise isolation on their own, we’re very impressed with their performance in loud spaces.

It’s worth noting that Apple’s AirPods Pro deliver ANC performance that is the equal of — and possibly even better than — the 1000XM3.

Each earbud can also be used separately on calls or for music, and the microphones and noise canceling worked wonders for call clarity, with sound quality that is akin to many dedicated Bluetooth headsets.

Unlike many headphones, where apps seem mostly designed to aid pairing, the Sony Connect app offers some great features, including the ability to adjust equalization, set your desired level of noise canceling, and assign the button for Google Assistant — the primary voice assistant on these headphones.

Since Sony seems to be agnostic when it comes to voice assistants, you can choose to talk to Siri or even Amazon’s Alexa instead.

They don’t have an IP rating for water resistance, so gym use is an at-your-own-risk situation.

For some, the WF-1000XM3’s biggest shortcoming is that they don’t have any water resistance, so gym use is an at-your-own-risk situation. When they launched — and when we first reviewed them — they also wouldn’t let you control the volume without having to reach for your phone or pull up your voice assistant. Sony has since fixed that issue with a new option in its app that lets you choose between volume control and ANC on/off.

Normally, we’d criticize a manufacturer of $230 in-ear headphones for a lack of water resistance, given that one of the best uses for true wireless earbuds is at the gym, where sweat can be a serious factor. However, we don’t think the absence is a big deal here for two reasons.

First, the headphones seem designed more for office and business trips than the iron palace, and second, Sony claims it hasn’t gotten any complaints about the previous-generation earbuds breaking at the gym. Sony seems confident you can use the WF-1000XM3 for workouts, provided you’re not sweating buckets.

Still, Apple’s AirPods Pro manage to offer IPX4, with most of the same bells and whistles. Sony’s own WF-SP800N offer an IP55 water-resistance rating, which suggests that Sony thinks you should look at that model if you’re really concerned about water.

Sony equipped its newest earbuds with its proprietary DSEE HX engine, which is designed to upscale lo-fi sound for better overall clarity. It works wonders on the WF-1000XM3, combining with noise canceling to provide some of the best fidelity you’ll find in wireless earbuds.

We’ve listened to everything from the lush pop of Gen Z icon Billie Eilish to indie rockers Golden Daze, finding ourselves consistently impressed by everything we’ve heard.

Treble is clear and crisp, and there is a hefty low end that never becomes a mud pit. Instead, songs feel like they have a weight and depth that we often miss on other pairs of true wireless earbuds, which tend to feel a bit exaggerated in terms of their sonic profiles.

Plus — and this is a big plus — the sound is customizable. If the sound signature isn’t quite to your liking, you can adjust it via the EQ settings in the app, so you’ll never be annoyed with the way the headphones treat certain genres. Want a bit more sheen and cymbal shimmer in your jazz recordings? Just boost the treble a touch. Problem solved.

While it is fun to mess around with the EQ settings, we spent the vast majority of our listening time with the headphones in the standard, flat EQ position. That’s because they already feel very well-tuned straight from the factory. Everything we listened to through the WF-1000XM3 sounded amazing right out of the box, and that’s really all we can ask from any pair of headphones, especially true wireless in-ears.

While no longer the only great true wireless earbuds to offer noise canceling, the WF-1000XM3 are still the best when you consider their sound quality, battery life, and copious additional features and customization. If you can get them on sale, you should, but even at their regular price of $230, these earbuds are worth every penny.

Since the Sony WF-1000XM3 debuted, Apple’s $249 AirPods Pro emerged, and they’re a wonder, proving themselves the WF-1000XM3’s equal in terms of noise cancellation and coming very close on sound quality. Sennheiser’s Momentum True Wireless 2 make for an apt comparison, too, though they’re more expensive at $300.

The real competitor here might be in-house, however, with the Sony WF-SP800N exceeding the XM3 in important categories like battery life and waterproofing. They don’t sound as great or have the noise=canceling abilities of the 1000XM3, but the SP800N still sound solid for $30 less. Not sure which one to buy? Check out our WF-1000XM3 vs. WF-SP800N comparison.

Sony has made excellent headphones for decades, and we have no reason to believe the build quality of the WF-1000xM3 is any different. It is worth noting that the life span of all true wireless headphones is limited by battery longevity, but we expect you’ll get at least a few years before the batteries start to show severe wear.

Yes — especially if you’re an Android user. If you want a feature-packed pair of true wireless headphones, and you like the sound of silence, the Sony WF-1000XM3 are still one of the best you’ll find.