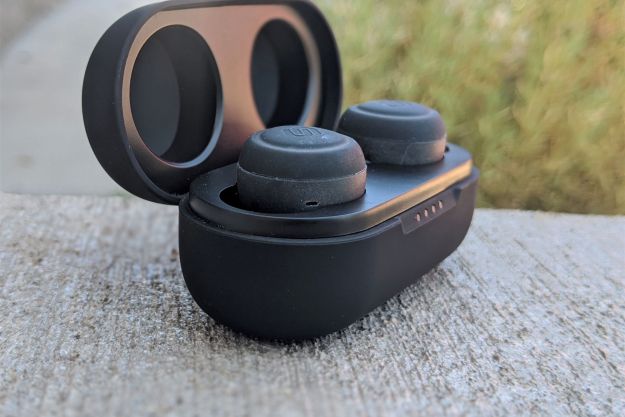 The Urbanista Athens are an unassuming little pair of true wireless earbuds. Between their generic appearance and far-from-premium price, there isn’t a lot of outward-facing qualities that would catch the eye of the average weekend warrior.

But, as we’re all bound to learn time and time again, looks can be deceiving. Pop Urbanista’s new $130 earbuds in, and they start to shine. These buds aren’t just an incidental surprise, but a formidable force against even some of the best workout-focused true wireless earbuds on the market today.

It’s a minor quirk, but I always prefer the book binding-style packaging that buds like the Athens arrive in, as opposed to the sleeve-style design of other earbud boxes. There’s generally less to take apart, and it’s a little nicer being able to have the entire packaging open in your hands. Urbanista even displays your news buds in a plastic casing for optimized gazing.

Underneath the tray that holds the buds and wireless charging case, you’ll find extra eartips and earfins as well as the quick-start manual and a USB-C charging cable. It’s nothing you haven’t seen before from most other , and likely not anything you won’t see again. That said, I’ll continue to note these standard contents because each component is an important part of the ensemble. That charging cable, as laughably short as it is, would make for no laughing matter if it wasn’t included with your purchase.

Singing a similar tune to the Athens accessories, the setup process is just about what you’d expect from any modern wireless earbuds. Pull the buds out of the case and they’ll enter automatic pairing mode, leaving you to find them in your mobile device’s Bluetooth settings and finish the connection. Other reviews of the Athens noted that the buds didn’t always automatically pair, but I didn’t experience this phenomenon in my time testing them.

Bluetooth 5 tech is built into these earbuds, as it should be at this point in time. As with most of my Bluetooth 5 experiences, the connection with the Athens was solid and offered plenty of range for moving about the house and getting chores done while still jamming out to Vitamin String Quartet covers. Yes, that’s absolutely a thing I do.

I’m admittedly smitten by the design of the Athens, thanks to their compact nature and frankly different footprint than other sports-minded buds. More recent sports buds I’ve tested, including the JBL/Under Armour True Wireless Flash X and the Edifier TWS6, have distinctly more pointed earfins. They both did a good job of keeping the buds secure but gave them a significantly larger presence in your ear.

Not so with the Athens, whose earfins are petite loops extending from the ends of the buds. As unpronounced as they are, they still have real traction in your ears and excelled across multiple runs and brisk walks during my review period with them. I found them to be more comfortable compared to those bigger-finned competitors, though not quite as comfy as the Jabra Elite 75t or Elite Active 75t.

The wireless charging case is pleasantly small, too, reminding me of a slightly smaller, dark-colored copy of the Samsung Galaxy Buds+ charging case to a certain degree. Speaking of which, the Athens are currently only available in black. If you were looking to take some creative leaps with your aesthetic, the Athens won’t be the buds that stand out in your ears. That said, they’re perfectly passable in terms of appeal as far as black go.

Urbanista went with a multi-press control system with the Athens, which the logo on each side serving as your button of choice. The manual lays out all the controls very matter-of-factly, including volume control (gratefully), the ability to pause and switch tracks, answer and end calls, and voice assistant integration. If you’re thinking that’s a lot for two buttons, you’re right, especially since none of these controls are utilized by more than two presses. It’s learnable, but not the easiest system, considering some commands are situational — for instance, pressing the left logo twice pauses and plays tracks, but also answers and ends calls.

Somewhat surprisingly, the Athens punch out of their price range when it comes to features. They’re not quite knockout-strength uppercuts, mind you, but they are significant jabs at competitors that cost more and offer less.

The Athens boast eight hours of battery life, and three additional charges for 32 hours of total playback. You can spend more and get better juice with competitors like the Sony WF-SP800N, but you can also spend more and unfortunately get less. The Jabra Elite Active 75t offer 7.5 hours of battery life — which often came closer to seven in our reviewer’s testing — for nearly $70 more than the Urbanistas. That may say more about the expense of the otherwise excellent Elite Active 75t, but it does position the Athens to have a slight advantage in this category.

Just as intriguing is the fact that the Athens have an IP67 weather-resistance rating, giving them complete protection against dust and contact as well as protection against 30 minutes of water up to 1 meter of submersion. That’s overkill for what most folks will use these for, I’d assume, but it does allow Urbanista to market these buds as swim and shower friendly. It’s also a better rating than both the Active 75t and the JLab Epic Air Sport, which previously held the title of our best true wireless buds for working out. Hint. Hint.

To be transparent, I didn’t get a chance to take these buds for a swim, but I did venture into the shower to test that waterproof rating, and the Athens came out squeaky clean on the other side.

Another small feature of note with the Athens is stereo phone calls, which seems like a minor perk until you’ve dealt with a pair of buds that only offers mono sound for calls. It may just be my personal preference, but I’d much rather have that sweet stereo sound for my conversations.

If there was one area where the Athens didn’t quite overdeliver, it’s audio. To be clear, I don’t mean to phrase that like it’s a detrimental aspect of these earbuds. They are $130 buds, and they sound like $130 buds should: Objectively decent, and in many cases good. I guess most everything else about the buds set me up to expect they’d perform past their price once again, and instead they sound like they ought to. Honestly, that speaks volumes more about the other features of the Athens than it does about their sound quality.

The Athens are clear-sounding buds when they want to be, with tracks like Jake Shimabukuro’s rendition of Hallelujah not missing a single pluck of the ukulele. Urbanista says it collaborated with audio engineer Axel Gretl on these buds, and with most music, it shows. They do feel like they’re trying a touch too hard when it comes to low end, specifically songs where those bass notes are more prominent throughout the track. Readers of my past reviews know that Lizzo’s music is a common starting spot for my bass testing, and the low end in Truth Hurts seemed to take the rest of the song hostage. I love low frequencies as much as the next listener, and I understand powerful bass can be impactful for athletes on the move. But it’s important to toe that (bass) line and avoid distracting from the rest of the track, and I thought the Athens struggled with that in certain instances.

These buds don’t have active noise cancellation, and at the $130 price point, they’re not currently expected to possess that functionality. With budget buds like the Edifier TWS NB breaking the mold, that’s likely going to change soon. But for now, the Athens get by with above-average passive noise cancellation, thanks to a snug fit in your ears. They get loud, too, which of course aids in blocking out the unwanted sounds of your surroundings.

Urbanista doesn’t have a lot of readily available information about the Athens’ microphones, but I can vouch that they make for quality phone calls. Like I mentioned above, I enjoyed having stereo sound for calls, but perhaps more importantly than that, my voice was able to come across clearly on the other end even amid noisier surroundings. My brother could barely hear the dogs wrestling in the background while we chatted about our weekend plans.

The Urbanista Athens are not only affordable, they overachieve in the most important categories for active earbuds. They may not be the gold standard, but they’re surely worth their weight in the stuff as remarkable sport-centric wearables.

The $200 Sony WF-SP800N have active noise cancellation, 13 hours of playback without ANC on, and great sound for $70 more. The $120 Edifier TWS6 cost $10 less and come with similar battery life and possibly better sound, but don’t stack up in terms of weather resistance with only an IPX5 rating.

The Athens come with a one-year warranty and an IP rating that protects them against nearly everything nature can throw at them. These buds are going to hang around.

Yes. The Urbanista Athens excel in many areas they shouldn’t have, at least as far as their affordable price point would have indicated. With their above-average battery life, comfortable design, and weatherproof features, the Athens are the buds to buy for the aspiring athlete.

The best wireless headphones for 2022: Which should you buy?
The best noise-canceling headphones for 2022
Best headphone deals: Save on Beats, Bose, and Sony
The best soundbars 2022: which should you buy?
HBO Max is back on Amazon Prime Video Channels
Get this 50-inch Vizio 4K TV with Disney+, Netflix built in for $298
Best over-the-counter hearing aids for 2022
A perfect gift for Apple fans, AirPods Max are $100 off today
Turn up the volume with the SVS Prime Wireless Pro speakers
The best romance movies on Netflix right now (December 2022)
Apple Music Sing brings karaoke singalongs to iPhones, Apple TV
The best stand-up comedy on Netflix (December 2022)
How to buy over-the-counter hearing aids