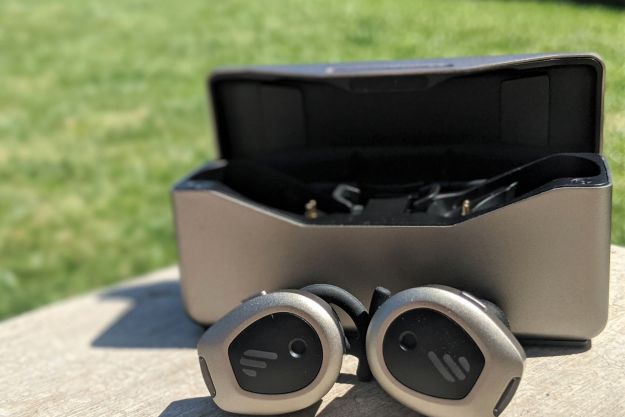 “By lowering the price for ANC, Edifier raised the bar for true wireless earbuds everywhere.”

Earbud enthusiasts are getting some good news courtesy of Edifier. We’ve reached an important milestone in the true wireless timeline, as legitimate active noise cancellation has entered the budget-friendly atmosphere.

For $120, Edifier’s new TWS NB earbuds offer the ever-coveted ANC feature in one of the most affordable true wireless packages we’ve seen so far. Aside from the monetary savings, though, what kind of value do these buds bring to the table?

For better or for worse, I’ve developed a habit of checking out a new pair of headphones or earbuds first and poring over the specs sheet second. It leads to some fun juxtapositions; for instance, based on the packaging and components of the Edifier earbuds, I would have sworn this was a far more expensive product.

The TWS NB arrive entrenched in their own foam bedding as you lift the lid on the package. In addition to the buds and the carrying case, Edifier included a USB-C charging cable, startup guide and manual, and extra eartips and earfins.

Setup is standard, with Edifier taking advantage of Bluetooth 5.0 in the TWS NB. The company also built an antenna technology called Laser Direct Structuring into the earbuds, which is meant to ensure a stable connection and combat interference.

Edifier projects a range of 33 feet, and I would argue that’s a bit conservative. I moved all around the house and between the back and front yards while my phone stayed in the kitchen. Impressively, there were no drops in signal.

The metallic finish of the TWS NB gives off a futuristic vibe with its somewhat odd shape. It’s undoubtedly a subjective matter, but I for one enjoy the aesthetic. Then again, I caused a minor controversy by saying I liked the unique design of the Microsoft Surface Earbuds 2. So, maybe my style tastes stray from the mainstream.

They were comfortable too, making the TWS NB worthy of longer listening sessions. They are large, and unfortunately, there’s just no getting around that. Sliding off a hoodie became a problem, as the earbuds were likely to catch and subsequently get lost in a dark cavern of cloth as I tossed the garment into the hamper. Sure, you could, you know, remove the earbuds before pulling off that layer, but that feels like an unnecessary inconvenience, as slight as it may be.

Outside of an IPX4 waterproof rating, there isn’t much on Edifier’s product page speaking to the capabilities of the TWS NB as earbuds for active folks. As I learned from firsthand experience, there’s a reason for that. The earbuds are perfectly secure moving at the pace of everyday life. But take them on a jog, and chaos ensues. They never fell out of my ear, but no matter how many times I adjusted the buds to get the earfins to stay put, I couldn’t escape the feeling of wearing dangling earrings — or what I imagine that feeling to be like.

I did swap out the earfins for the included larger pair, and that did help to a certain degree, just not as much as I had hoped.

The charging case, which Edifier describes as an “anodization-processed fade-resistant aluminum” product, is larger than alternatives like those for the Apple AirPods or Google Pixel Buds 2. The rectangular shape of the case almost resembles a harmonica.

When it comes to playback time, the TWS NB interestingly occupy space on both sides of the coin. With active noise cancellation on, they’re only good for 5 hours of audio. That’s in line with similarly priced devices like the Amazon Echo Buds, but it would leave most people wanting more if that’s where the battery buck stopped.

However, without ANC, the playback time for the TWS NB jumps to 11 hours, with two additional charges included with the case. That ranks up there with the best of them – specifically, the Samsung Galaxy Buds+ and the Sony WF-SP800N – for a significantly smaller chunk of change.

There are just two buttons on the Edifier earbuds, one on each of the multifunction variety. You can toggle between active noise cancellation and ambient sound mode with either button, and the same goes for things like switching tracks or answering and declining calls. It takes a little bit of legwork to get up to speed with the controls, but they work well after the initial learning period.

Edifier has its own app that pairs with the TWS NB … and that’s about all there is to say on that front. The app can turn ANC on and off, as well as change tracks, but the buds themselves can do that on their own. Unless I’m missing something substantive, the app is a nonfactor for now.

For the battery life and ANC features offered at this price, all I really hoped for out of the TWS NB was passable audio to add to the ensemble. I got that, and then some.

The earbuds each have a 13mm graphene diaphragm, which Edifier touts as being “one of the strongest materials in the world,” with an “unbelievable strength-to-weight-ratio.” That’s largely market speak, of course, but from my experiences, there is something to these drivers.

On tracks like Megan Thee Stallion’s Savage Remix (that’s what the kids are listening to these days, right?), the TWS NB displayed above-average low-end response. Over on the other end of the musical spectrum, songs like The Devil Went Down to Georgia by the Charlie Daniels Band proved the Edifiers offer more than reasonable clarity for the cost. To be transparent, it’s hard to butcher some good fiddlin’, but the NWS TB delivered exceptionally, nonetheless.

The earbuds also have aptX support, a nice addition considering some higher-priced options lack it. They’re also capable in terms of call quality, though nothing about that portion of my audio testing screams extraordinary. Still, I think the majority of listeners will enjoy the sound quality offered by Edifier.

I’ll assume the role of skeptic when discussing active noise cancellation for $120, merely because it hasn’t really been done to this point, at least not in a noteworthy sense. Amazon’s Echo Buds came the closest, with noise-reduction technology that worked well for a price of $130. But until now, active noise-canceling true wireless earbuds for this cheap haven’t been on the radar.

The TWS NB have feed-forward ANC technology, meaning microphones on the outside of the buds analyze and dampen outside sounds. It’s closer to the basic end of noise cancellation, but that’s not a huge matter at this price. Done well, it can still be an effective method of keeping unwanted sounds out of your listening experience.

Based on my time with these buds, the tech is indeed done well. While on a walk alongside a fast-flowing river, toggling the ANC feature on with a double tap of either bud completely erased the sound of the rushing water. With another double tap on one of the buds, Edifier’s ambient sound mode came into play, which was a nice touch when the need to offer salutations to a fellow dog walker repeatedly came up.

I wouldn’t compare these to the top-of-the-line ANC tech in products like the Sony WF-1000XM3, but I’d say the TWS NB has worthwhile noise-canceling abilities for what you’re paying.

The Edifier TWS NB are part of a growing trend of bulky earbuds that, frankly, I’m not on board with. They, are, however, leading another trend, that of affordably priced that don’t skimp on features. That’s something we can all rally around.

The $130 Amazon may be a better fit – literally – for some, with the added benefit of hands-free Alexa functionality. The Sony WF-XB700, also priced at $130, have 9 hours of battery life, though they’re missing noise cancellation functionality.

The TWS NB come with a 1-year limited warranty and are built with scratch-resistant hardware. They should be able to handle some wear, without the tear.

Yes. You might want to find another pair if you’re a runner. But by lowering the entry fee for active noise cancellation, the Edifier TWS NB just raised the bar for everywhere.

The best cheap headphones and earbuds for 2022
Best Amazon Echo Deals: Get an Echo Show for $40
Soundcore’s latest earbuds steal some of Apple’s smartest features
Amazon’s third-gen Fire TV Cube has great features the Apple TV is missing
The best movies on Disney+ right now (October 2022)
Best new movies to stream on Netflix, Hulu, Prime, HBO, and more
The best TV shows on Amazon Prime right now (October 2022)
The 74 best movies on Hulu right now (October 2022)
YouTube TV now lets you subscribe to some add-ons without a base plan
How to perform the AirPods Pro Ear Tip Fit Test
How to check your AirPods battery level
Are Apple AirPods waterproof? Everything you need to know
Ar $25K, LG’s 97-inch G2 OLED is actually a bargain