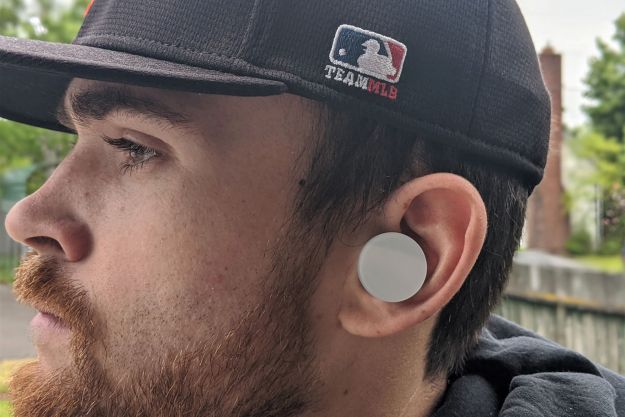 “When used as a productivity tool, the Surface Earbuds offer solid value”

With its new Surface Earbuds, Microsoft took a chance. One of the world’s biggest tech companies could attempt to compete in a new field by beating its competitors at their own game. Or it could double down on its own brand, and rely on attempting to create an experience that’s truly unique.

You can probably guess which direction Microsoft went.

The $200 Surface Earbuds are here, arriving notably cheaper than the price they were originally unveiled at in late 2019 — $250. Microsoft marketed them as a pair of true wireless earbuds made almost exclusively for the working professional, integrating the new buds as creatively as it could with its own software. In doing so, the company inadvertently raised an important question: Can the Surface Earbuds succeed as the ultimate productivity buds, while also thriving as your everyday wearables?

The packaging for the Microsoft Surface Earbuds is classically minimalist: a white box with a single shot of the buds themselves across the top. Beneath the lid sits the glossy white charging case adorned with the Microsoft logo. The buds rest inside, with a USB-C charging cable, two extra pairs of eartips, and product documents included.

Setup of the Surface Earbuds follows one of two paths – simple or super simple. If you’ve ever paired wireless earbuds with your smartphone, this process won’t be any different. However, if you’re pairing the Surface Earbuds with a Surface PC, Microsoft has a Swift Pair feature to make connecting that much easier. It’s a feature akin to the quick-pairing abilities of the Google Pixel Buds 2 and Apple AirPods, and a trend that we wouldn’t mind seeing more of in the future.

Microsoft does have its own Surface Audio app, with useful but not completely necessary video tutorials. If not for firmware updates and an included equalizer, I’d say you could go without the app altogether and not miss much.

The Surface Earbuds support multi-device connections, so toggling between my phone and computer wasn’t an issue. As far as the connections themselves, I went without any significant dropouts during my review period, and that included instances when I’d leave my phone in the house and venture into my modest-sized backyard.

Part of me is inexplicably infatuated with the aesthetics of the Surface Earbuds. Another part of me wants to take the entire design back to the drawing board. Clearly, there’s some unpacking to do here.

The description of the buds that we gave in October 2019 at the company’s Surface hardware event remains apt – from the outside looking in, they resemble gauge earrings. Admittedly, I’ve never been a fan of that actual style of earring. But when retconned for an earbud design, it’s just the kind of breaking-the-mold appearance that I find quite appealing.

On the other side of the touch-sensitive outer disk is a soft, silicone eartip. I swapped the original tips for the smaller version, giving the buds a more secure feel in my ears. Speaking of fit, Microsoft says the Surface Earbuds have four anchor points to provide the most effective fit possible.

Ironically enough, my design complaint is about fit. These are heavy buds; at 7.3 grams each, they’re beefier than most competitors, including those from Apple and Google as well as the Samsung Galaxy Buds+ and the Amazon Echo Buds, and they do slightly extend outside of the ear. Both of those are relatively minor and forgivable issues. What’s irksome is that buds priced and equipped to be workhorses just don’t have the secure fit to take on that role — particularly when the wearer is exercising.

I tried to run with these buds twice, and both times fell into quagmire of constantly having to readjust them during my run. I haven’t ruled out the possibility that I have misshapen ear canals, though I haven’t run into these issues with any of the recent buds I’ve reviewed. Regardless, it’s one of those flaws that gets more aggravating each time it happens, and it left a sour taste about usability.

To be fair, press materials for the Surface Earbuds steered clear of mentioning athletic compatibility, making it clear that they just weren’t intended for those kinds of activities. But if you’re considering spending $200 on earbuds, that’s an important distinction to make. You won’t be running or engaging in high-intensity workouts with these.

The standard features for the Surface Earbuds are competitive, though not unique: An IPX4 waterproof rating, eight hours of battery life with three additional charges, and touch controls for completing tasks like changing music, making calls, and interacting with smart assistants, including Microsoft’s own Cortana. Outside of an auto-pause feature when pulling a bud out, which is oddly MIA, the Surface Earbuds have plenty of features that help them hang in there with the stalwarts of the industry.

Frankly, if this were all the Surface Earbuds had to offer, I’d advise looking elsewhere. There are other options that execute these features just as well, and in some cases better, for less of a hit to the ol’ bank account. Luckily, it’s the Surface Earbuds’ skill set when utilized with Microsoft 365 that puts them in a separate class.

If you’re operating an iOS device with the Surface Earbuds, you can listen to, delete, and reply to emails while on the move thanks to the Play My Emails feature in the Outlook mobile app. Looking for something a bit more cutting edge? Using the earbuds with PowerPoint on a PC presents the option to enable live captions and subtitles, both of which can be translated into one of more than 60 different languages.

Granted, that may be more of a niche perk than a widely usable feature – at the moment, I’d have to assume most everyday Surface Earbuds owners won’t need to translate their presentations into different languages. It’s still a nice option to take advantage of should the reason ever present itself.

More than anything, I believe Microsoft’s dictation feature is the most applicable of the bunch. In programs like PowerPoint, Outlook, and Microsoft Word, you can use your voice to dictate content while Microsoft writes it down for you. It’s not a perfect tool, as you might expect; my experiences found me correcting a few grammatical errors here and there, and it’s already an available feature from Microsoft without needing the buds themselves. But I found the two built-in microphones on each earbud to be more effective in picking up my speech, and I was able to write this section of the review using dictation almost entirely.

From what I can tell, the Microsoft Word app does not currently support dictation, so this is not a mobile-friendly feature. That could change in the future, though, leaving the door open for improvement on an already intriguing feature. In terms of productivity, with a few tweaks, this could really be a game-changer.

Sticking with Microsoft’s mantra of getting things done, call quality would be the most paramount component of the Surface Earbuds’ audio quality. From my testing, the previously mentioned microphones in each bud do a tremendous job of both picking up your voice and downplaying background noise.

As for music playback and other content, the Surface Earbuds are outfitted with 13.6mm drivers (relatively large for earbuds), capable of operating within a frequency range of 20-20,000 Hz. They support SBC and aptX audio codecs, and feature what Microsoft has dubbed its “Surface Omnisonic sound profile” for improved sound.

The resulting sound quality is … good. The sizable drivers handle the low end well, and music, in general, is delightfully clear. Overall, Microsoft achieved a feat nearly identical to its mainstream features: that is, a sound that may not beat out its competitors, but objectively sounds good enough to have a seat at the table. The problem is, Microsoft grabbed one of the most expensive chairs in the house. There’s a sense of self-awareness in the fact that Microsoft slashed the retail price on the Surface Earbuds between their fall unveiling and spring release, but that’s more of a Band-Aid than a long-term solution.

The Surface Earbuds do lose brownie points for lacking active noise cancellation, let alone effective passive noise isolation. It goes without saying that I haven’t yet commuted with these, but a morning walk down a busy street let plenty of noise penetrate my listening experience. Sure, you can bump up the volume to drown things out. but at normal listening levels, you’re going to hear the outside world alongside your podcasts and playlists.

When used as a tool in the work environment in conjunction with Microsoft’s own devices and software, the Surface Earbuds offer solid value and an experience that no other pair of buds can currently match. They just aren’t the most flexible true wireless option for the money, and it’s not realistic to expect them to be.

In terms of productivity, they’re hard to beat. But when things like audio quality, battery life, or usability come into play, the floodgates open. The $179 Google Pixel Buds 2, $129 Amazon Echo Buds, and $150 Samsung Galaxy Buds+ are all better values for what they offer. Heck, the Sony WF-1000XM3 are currently retailing for just $30 more than the Surface Earbuds, and they’re our favorite wireless earbuds overall.

This is where it helps to be Microsoft. Without even noting the Surface Earbuds’ one-year limited hardware warranty, these buds were born with Microsoft’s reputation for crafting well-built devices. Expect the Surface Earbuds to last if they’re well taken care of.

Yes, but only if you’re searching for earbuds that can truly function as a productivity tool, and a good one at that. Otherwise, you can find buds for a better value that better fit your needs.