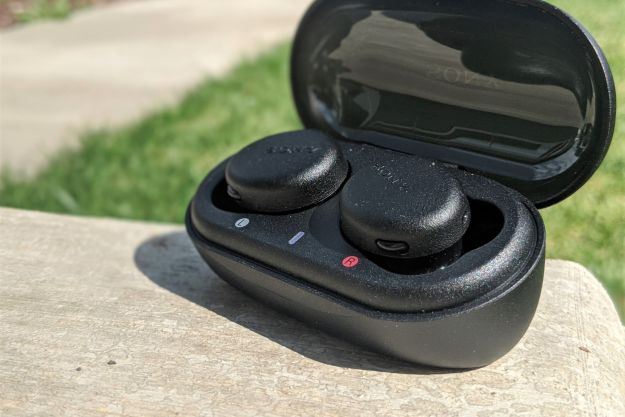 There are any number of words you could use to describe Sony’s newest earbuds, the WF-XB700. A few – like fun, bulky, powerful, or affordable – immediately come to mind.

One word resonates the most, however. Value.

They may not look like much, but at $130, the WF-XB700 come with a set of features that far exceed their cost. If you can come to terms with the fact that these buds aren’t a substitute for their bigger sibling, the WF-1000XM3, and learn to tolerate a few quirks, you’re in for a pleasant surprise with Sony’s latest true wireless offering.

The packaging for the WF-XB700 is as standard as can be, and the contents of the box are consistent with what we’ve come to expect from earbuds. There’s a charging case with the buds themselves inside, a USB-C charging cable, extra eartips, and documentation that includes an operating manual and warranty information.

If you’ve connected to a pair of wireless earbuds before, chances are you don’t need to check the manual before trying the WF-XB700 out. You may, however, need to switch out the eartips for one of the three pairs of replacement options. Conveniently, the tips included with the earbuds fit my ears well from the get-go.

Like most earbuds these days, the WF-XB700 support Bluetooth 5 technology. After more than a week of usage, I didn’t experience any connection issues. For the reasons you might expect, I couldn’t quite push the limits on how far the Bluetooth connection will hold up, but I didn’t have to deal with any noticeable issues when moving around my house or backyard.

I’m conflicted about the design of the WF-XB700. To be clear, it’s a functional construction, even if at first glance they don’t seem capable of such a feat. Once I found the right fit in my ears, the buds stayed secure thanks to what Sony calls a “tri-hold structure” that relies on making contact with three different points on the ear. They did create a good seal around my ear canals, which bodes well for sound quality.

At the same time, the structure of these buds is problematic. It’s an odd word to use for this kind of product, but the WF-XB700 are what I can only describe as “layered,” with a pronounced footprint that extends well outside of your ear. In other words, be careful with those hoodies. These massive buds are bound to get snagged, a quirk that only gets more irksome each time it happens.

There are two buttons built into the buds, one on each side, and they proved to be adequately responsive. In a similar fashion to the buds themselves, which are black with blue trim, the charging case isn’t flashy. Compared to other cases, it packs a considerable amount of depth in order to accommodate the size of the buds.

Function over form in earbuds is not a bad thing. I would have liked a slimmer profile overall, but for most people, it’s a worthwhile compromise given the capabilities of these buds.

An IPX4 water-resistance rating. Voice assistant integration. Nine hours of playback on a single charge, with a quick charging feature that gives you an extra hour of audio after just 10 minutes inside the case.

A year ago, those features could easily have been reserved for gear in a much higher tax bracket. Since then, they have quickly trickled down to a budget level of earbud that’s much more palatable for the masses, i.e., the WF-XB700.

In the time I spent with these bulky buds, each of these features worked remarkably well. The buds would easily take me through an entire workday before having to recharge. The earbuds’ case only has one additional charge, which is less than ideal, but if you can listen to them all day and charge them at night, I don’t see this as a huge issue for most.

A couple of sweat-inducing runs proved that IPX4 rating holds true. As for the voice assistant, while not as simple as wake-word-enabled products like the Amazon Echo Buds or Google Pixel Buds 2, it still worked well when I used the right earbud’s button to summon it.

The feature I wish these buds had, as seemingly simple as it is, would be the ability to automatically pause audio when taking an earbud out of your ear. It’s something I’ve gotten so used to with other earbuds, and because of that, I repeatedly missed portions of podcasts and music when I pulled a bud out to engage in a conversation.

If you take these buds for what they are, a $130 pair of true wireless earbuds that are meant to sound more fun than refined, then you’ll enjoy Sony’s new product. If instead you’re looking for superb sound to the tune of Sony’s flagship WF-1000XM3, the WF-XB700 may not be for you.

Sony slapped its Extra Bass brand on the WF-XB700, and to me that’s where the “fun” comes from. The low end has plenty of punch, but stops short of sounding bloated. If you’re someone who regularly streams top hits playlists on Spotify, the WF-XB700 will be a great complement to that listening experience.

The great bass, however, comes with its share of drawbacks. The rest of the frequency range takes a back seat, and when you factor in lack of support for audio codecs like aptX, it will likely leave more experienced listeners searching for definition that isn’t fully there. But again, if you’re after reference-level audio, these simply aren’t the buds you’re looking for.

There’s no noise-cancellation technology with the WF-XB700, which outside of Amazon’s earbuds isn’t expected at this price (though I suspect that will change soon). Call quality is solid, adding to what I would consider above-average sound for what these buds cost.

For the money, Sony’s WF-XB700 are fun, quirky earbuds that are a lot more fun than quirky. In spite of their shortcomings, size chief among them, Sony’s new earbuds are every bit the value they positioned themselves to be on paper.

The $130 Amazon Echo Buds have active noise reduction, though it comes at the cost of battery life. And, if you’re heavily invested in either the Apple or Android ecosystem, the Apple AirPods or Google Pixel Buds 2 might be better, albeit costlier options.

On top of Sony’s generally strong standing as a company that makes durable products, the WF-XB700 come with a one-year warranty. You shouldn’t have to worry about getting your money’s worth with these earbuds.

Yes. I’m still not sold on their design, but considering the affordable price tag, enjoyable sound, and plethora of features, the WF-XB700 are a bargain.