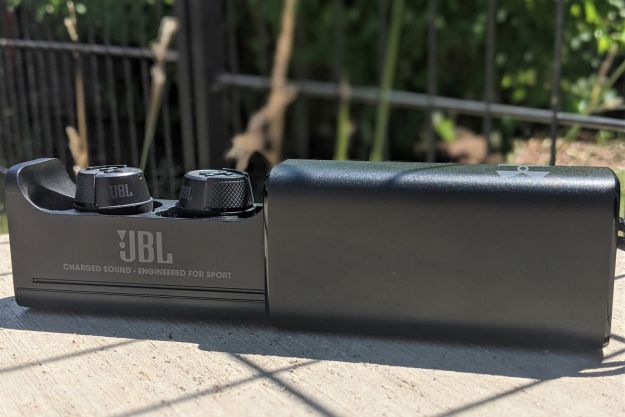 “A few key upgrades keep the Flash X in the wireless workout mix.”

JBL and Under Armour have partnered once again to release the new True Wireless Flash X, a $170 second-generation version of the original True Wireless Flash. Instead of sweeping changes to what were already considered to be good workout earbuds, the Flash X got a refresh in a few targeted areas. A few more would have been nice, but let’s dig into what they’ve packed into the latest pair and see if it makes them a more compelling buy.

JBL/Under Armour did quite the commendable job of adding some pomp and circumstance to the packaging of the Flash X. To find your way to these buds, you must remove a glossy sleeve from the box, then lift its lid to reveal the buds’ charging case nesting in a T-shaped layer of foam. Extra eartips and ear fins are sitting in their own enclosure on one side of the foam, with a USB-C charging cable sitting on the other. Not to be forgotten, all the documentation you’ll ever need on these buds sits just beneath the buds and accessories.

Joining an increasing number of earbuds to adopt this feature — the Apple AirPods, Google Pixel Buds 2, and LG ToneFree all come to mind — the Flash X have a Fast Pairing feature for compatible Android 6.0 or above devices. If you’ve got one of those, an easy task just got easier. The buds will make the introduction to your phone for you, and all you have to do is keep the conversation going to get connected. If you miss this, don’t fret. The traditional Bluetooth setup route will get you to the same destination, just with less excitement.

As with most of the recent true wireless earbuds we’ve tested, the Bluetooth 5 tech in the Flash X works remarkably well for maintaining connection and providing solid range. There is a limit, of course; I got nearly to the end of my side street to take my garbage cans out before the buds finally cut out, well over 50 feet away from where I left my phone in my house.

In terms of design, not much has changed generation to generation with the Flash X. The buds themselves have the same understated aesthetic as the originals, with the Under Armour logo on the endcap and JBL’s logo strewn across the side of these otherwise black earbuds. The charging case is incredibly similar, too, sliding open to display the earbuds in the same fashion your old filing cabinet used to slide open at your office cubicle (remember those?).

After finding the best combination of eartips and earfins, the Flash X showed off the same comfortable but tight fit as their predecessors. That style is great for working out, as these buds didn’t budge in transit during walks and runs, and it creates effective passive noise cancellation with that air-tight seal. But after longer periods of listening, I did submit to some fatigue purely from how implanted they were in my ears. I’d honestly take that over the alternative — buds that stubbornly refuse to stay in your ear — but the Flash X don’t compete with the Jabra Elite Active 75t, the current best-fitting true wireless earbuds according to the collective minds at Digital Trends.

To offer true wireless earbuds for $180 without a feature as simple as volume control is absurd.

One thing about the now-nostalgic design of the charging case for the Flash X: It’s big. Like, 117 grams big. By comparison, the case for the Apple AirPods comes in at a sprightly 40 grams. As workout-centric earbuds, I don’t know how often you’ll be lugging around the case in your pocket. But if you are, that’s certainly something to account for.

I enjoyed using the controls for the Flash X, with one glaring exception. There’s a single button on each bud built into the Under Armour logos, and you do have to remember how many presses on which bud correspond to which command. But the system worked well after a short acclimation period and was free of the annoying accidental commands that come with adjusting buds that have touchpads. There is, however, no control for turning the volume up or down outside of calling up your preferred voice assistance and asking it to do it for you. I’ve criticized many earbuds in the past for this, and I’m perfectly fine with this being the hill I die on. To offer true wireless earbuds for $180 without a feature as simple as volume control is absurd.

JBL/Under Armour revamped some key features of the Flash X, and fortunately for these buds, doing so has kept them in the conversation with the top options in the true wireless workout class. For example, if the Flash X kept the five-hour battery life of the originals (a positive note for those buds at the time), they would have been blown away by options like the Sony WF-SP800N or the JLab Epic Air Sport.

Instead, the Flash X get up to 10 hours of battery life (an accurate spec, by my testing), with four additional charges for 50 total hours of playback. That’s not up there with the likes of the Sony’s, which can last for 13 hours of non-active noise cancellation playback, but it’s right on track with the Epic Air Sport and significantly better than the Jabra Elite Active 75t, which come in at 7.5 hours and 28 total for $30 more.

The Flash X carried over an IPX7 weather resistance rating from the first generation, protecting the buds against being submerged in up to three feet of water; that’s undoubtedly solid for workout earbuds. But the Elite Active 75t come with an IP57 rating to protect against dust in addition to water, with the Epic Air Sport offering an IP66 rating. Maybe it would have affected the pricing of these new earbuds but adding protection against dust to the Flash X would have been a meaningful step forward for buds meant for rugged usage.

The Flash X have a Bionic Hearing feature that’s essentially an umbrella term for two similar features, TalkThru and Ambient Aware. According to these companies, TalkThru lowers music volumes and amplifies speech to make having a conversation with these earbuds in easier. From my experiences, this worked well and allowed me to exchange pleasantries with people I passed on the trail without pulling out a bud. Ambient Aware, meanwhile, is supposed to increase ambient sounds to make you aware of your surroundings. Maybe the passive cancellation is just that good, but I felt Ambient Aware mode was mostly ineffective, to the point where it was difficult to determine whether this feature was on or off. Luckily, TalkThru picked up some slack here, but having a lackluster ambient sound feature is a seriously bad pairing with great passive noise cancellation.

The Flash X has what its spec sheet calls “JBL Charged Sound,” or “bold sound tuned for sport with rich bass to crush your workout.” You should largely disregard all that marketing speak, with the takeaway being that the 5.8 mm drivers in these earbuds are full of sound.

I did not have the original True Wireless Flash on hand to test sound side-by-side with the Flash X, but by comparing everything we’ve said about those first-generation buds with the Flash X, I don’t think the sound quality has seen much change here. Bass is big and bold, making tracks like Drake’s Gods Plan really stand out. You won’t have to worry much about getting pumped up for your workout – with the right music, these buds will take care of that themselves.

You won’t have to worry much about getting pumped up for your workout – with the right music, these buds will take care of that themselves.

I found good detail in the upper register too, thanks to tunes like an acoustic rendition of Stand By Me by Tom Speight. But as much as the good hasn’t changed with these buds, an issue from the first-generation again reared its head: I also found a lingering problem when using them in conjunction with video. The first generations were noticeably out of sync with YouTube and Netflix videos, and this issue quite obviously hasn’t been fixed in the Flash X. I’d have to guess there aren’t a lot of times that video watching and working out intersect, but if you were thinking of using these while on a treadmill and watching Netflix or live sports on your phone or tablet at the same time, we would recommend against that. The lag is seriously noticeable.

The Flash X have gone the route of dual microphones to aid call quality, and it does that effectively. I wouldn’t say these earbuds are anything to write home about when it comes to skillfully handling phone calls. They do the job enough to not be annoyed by them, but not enough to be wowed by their call quality either.

The JBL/Under Armour True Wireless Flash X got a couple of key upgrades that keeps them in the conversation alongside the best workout buds you can buy. They stay firmly in your ears and sound great with regards to what we expect for music to get your blood pumping during a workout. However, they do have a handful of unaddressed issues that are hard to ignore at their price point, keeping them from making any major strides in where they stand against the competition overall.

I would prefer to have dust protection, but I am content with the Flash X having IPX7 weather resistance, a durable build quality, and a one-year warranty. These should get you through plenty of workouts.

Yes. I wasn’t originally sold on the $170 price tag of the second generation True Wireless Flash X, especially because the buds only had a few considerable upgrades, namely battery life and Bluetooth technology. But they were quality earbuds the first time around, and they still stack up well to their more expensive counterparts.