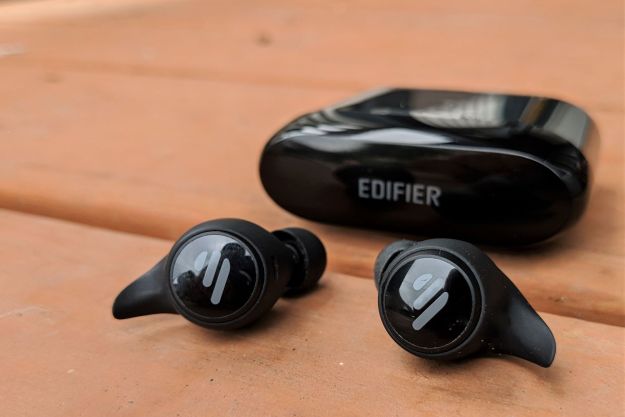 Edifier made its pitch to take the world of affordable true wireless earbuds by storm this year with the release of two identically priced products: The TWS NB and the TWS6.

The TWS NB impressed us enough to be named our new favorite budget true wireless earbuds, so expectations were understandably high for the $120 TWS6, a pair of buds with similar features and a few key differences that gear them toward active audiences. After a week of having these earbuds constantly in my ears, consider those expectations met.

With the last Edifier buds I reviewed, I was wowed by the luxuriousness of the packaging they came in. It seems like this is a trend with the brand because I was met with the same takeaways when opening the TWS6.

Both the charging case containing the buds and the four (!) pairs of extra eartips were waiting patiently in foam padding. Just below the eartips sat a small box that held a USB-C charging cable, a setup guide, and silicone “ear wings,” as Edifier calls them.

There’s a pairing button on the case itself that begins the connection process, and following the standard procedure of finding the buds in my phone’s Bluetooth settings led to a quick, simple setup. There’s nothing fancy or extraordinary about the process, but the ability to easily connect a new pair of earbuds is always appreciated.

I will caution, however, that if you’re looking for more detailed guidance on the functionality of the earbuds or the proper way to fit the ear wings onto the buds, you won’t find them in the condensed physical version of the manual. You’ll have to venture online for the full edition to get that information.

I’m intrigued by the way the TWS6 looks but also slightly perplexed. Because as much as I liked the initial aesthetic of the buds, I do have a few concerns about the methodology of the overall design.

First, the TWS6 are sleek and simplistic, presenting themselves as buttonless buds outfitted in a black finish (white is also available). They aren’t heavy in your ears, and they don’t protrude the way other options like the Sony WF-XB700 do. But they are thick, something to make a note of if you’re firmly against a “plugged ear” sensation. Regardless, they were plenty comfortable to have in my ears for extended periods of testing.

There are both memory foam and silicone eartips to choose from, and in my testing, I picked a smaller silicone alternative to the ones included on the buds and found it to be a good fit. There are also those aforementioned ear wings, which is where my confusion began. The TWS6 do not come with ear wings already attached to the buds, but part of me really thinks they should have been. That’s because if, like me, you just wanted to take the buds out of their case, pop them in your ears, and start listening, you’d be getting a very different experience.

This is important to note because, without those wings, the buds didn’t fit very snugly in my ears. Finding the right wings completely changed that, making the TWS6 much more suitable for the intense workouts and activities Edifier is targeting with this product. I do accept the possibility that this is a user error, and most buyers will know hoe to apply the ear wings without referencing the guide. But for those who may have a similar mindset, I’ll offer this advice: Wrap the buds in your preferred ear wings and save yourself the trouble of having to readjust constantly while out for a walk.

Moving on to the case, it has the same black finish as the buds and essentially looks like a wider imitation of the case for Apple’s ever-popular AirPods. I was initially worried about how the buds would fit in the case with the wings attached. I will say for the sake of clarity that they are a bit of a tighter fit, but they still secured into place and charged without a hiccup.

Comparing feature sets between these buds and the TWS NB, it is evident that Edifier had two different demographics in mind with these products. Whereas the TWS NB may have been more angled toward the serious music listener, the TWS6 have traits that suggest they’re far more lifestyle-oriented.

The TWS6 support 8 hours of playback at a time, with 32 hours of battery life in total with the charging case. The TWS NB can technically last 11 hours at a time, but only without active noise cancellation (ANC) on. With that coveted feature on, playback drops to 5 hours.

The differences between the buds become glaring when looking at waterproof ratings. The TWS NB have an IPX4 waterproof rating, which is adequate but not special. The TWS6, meanwhile, introduce IPX5 resistance that protects them from the sustained application of moisture — like rain. Having been caught in a downpour the morning before finishing this review, I can vouch for their ability to stand up to harsh weather.

Both Edifier buds we have discussed here have Bluetooth 5.0 support, and I experienced similarly strong levels of connection with each pair. Where the TWS6 falls behind significantly, though, is controls. The TWS NB have multifunction buttons for a variety of uses. In contrast, the TWS6 has touchpads that unfortunately lack much in the way of functionality.

I can pause and resume tracks with a double tap on the right bud and call up my voice assistant with two taps of the left. Missing here is the ability to change tracks and turn the volume up or down. Asking Alexa to put a certain song or playlist on does help, but it still doesn’t completely ease the pain of missing out on a pair of what I categorize as both standard and crucial controls.

Edifier hasn’t been quiet about touting the Knowles Balanced Armature drivers built into the TWS6, and for good reason. At just 12mm in diameter for the entire bud, these drivers may be on the small side, but they pack a thrilling punch.

Based on my listening experiences, the TWS6 have all the necessary audio qualities to make them solid-sounding buds for workouts and other activities. I’ve been listening to a healthy dose of Soca music lately (it’s a long story), and the TWS6 handled the bass-heavy Caribbean beats of Michael Montano’s Toco Loco skillfully.

They also pair well with more mainstream genre. One of my favorite test tracks, Blues Travelers’ Hook, was once again a fun ride that showcased the ability of the TWS6 to dance through a range of frequencies. Other genres and tracks led to the same conclusion: These earbuds have a delightfully enjoyable sound, one that I think will satisfy most people looking for buds in this price range.

I would, however, choose the TWS NB over these buds in terms of sound quality. Even though the TWS6 also support aptX, the NB have an edge in definition and clarity, as well as ANC to aid the listening experience. The TWS6 have efficient passive noise cancellation thanks to their fit, but it doesn’t match the benefits of having ANC, like being able to listen to music or take a phone call without interruption.

Edifier did it again with the TWS6, creating an affordable pair of true wireless earbuds with neat features and exceptional audio quality. This time, they just did it for a different listener.

I would probably still pick the $120 TWS NB for their benefits in audio quality and controls, though they aren’t ideal for active scenarios. Outside of the Edifier brand, the $130 Amazon Echo Buds or the $130 Sony WF-XB700 are both solid competitors in this price range.

The TWS6 has a build quality that feels solid, and an impressive waterproof rating to shield it from nature. It’s a safe bet that you’ll get your money’s worth out of these buds.

Yes. Limited touch controls are a bummer, but it’s doesn’t detract from what amounts to a valuable pair of workout-ready buds in the Edifier TWS6. Just remember to attach those ear wings.

Topics
The best Bluetooth speakers for 2023: Marshall, Sonos, JBL, and more
NAD’s CS1 adds wireless streaming music to any audio system
Bowers & Wilkins’ wireless earbuds get better battery life and longer range
Amazon adds audio personalization to Echo Buds 2
The best indoor TV antennas for 2023
The best waterproof Bluetooth speakers for 2023
The best VPN for streaming for 2023
Marshall’s latest Bluetooth speaker has four drivers for 360 sound
Showtime is being merged into Paramount+
Sling is now 50% off — stream live sports without cable
Klipsch follows the success of The Fives with The Sevens and Nines powered speakers
Everything leaving Hulu in February 2023
Peacock does away with free tier for new subscribers